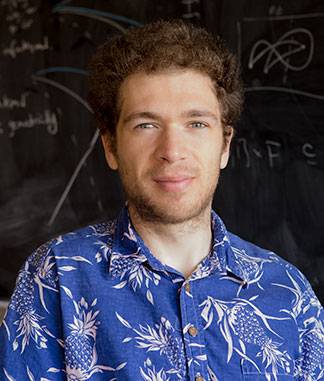 John Pardon, a Princeton University professor of mathematics, has received a National Science Foundation Alan T. Waterman Award, which is the nation's highest honor for scientists and engineers younger than 35. The prize carries a five-year, $1 million grant.

Pardon was recognized for "revolutionary, groundbreaking results in geometry and topology" that "have extended the power of tools of geometric analysis to solve deep problems in real and complex geometry, topology and dynamical systems," according to the prize citation. He was selected along with Baratunde Cola, an associate professor of mechanical engineering at Georgia Tech.

Pardon explores problems in geometric topology — which is the study of properties of shapes that are preserved under continuous deformations — and related fields, including symplectic geometry, differential geometry and low-dimensional topology. He was valedictorian of Princeton's Class of 2011 and joined the University faculty in 2016 after serving as an assistant professor of mathematics at Stanford University.

Pardon established himself as an accomplished mathematician from an early age. During his senior year at Princeton — where he primarily took graduate-level math courses after his sophomore year — he wrote a paper that presented a solution to a knot-theory problem presented by mathematician Mikhail Gromov in 1983. Pardon's solution was published in the journal Annals of Mathematics and brought him the 2012 Morgan Prize, which is considered one of the highest mathematics honors for undergraduates.

Pardon attributes his devotion to math to the elegance the discipline can exhibit. His current projects include counting intersections in certain high-dimensional spaces, for which he has developed a framework for defining intersection numbers.

"My main personal motivation to work on problems in mathematics is aesthetic," Pardon said. "The most satisfying part of doing mathematics is to find a beautiful proof or a beautiful theorem. I can only hope that I have succeeded in a small way in this respect."

Pardon works on numerous problems at once, he said, moving between them as he makes progress — or doesn't, he said.

"Most of the time I spend working on a problem is spent being frustrated and/or unable to make progress," he said. "At such times, it is helpful to have a number of different problems in mind, and the wide diversity of problems in different areas of mathematics is another aspect of the field I find attractive and enjoyable."

"John Pardon is a gifted mathematician who has been making significant contributions to topology and related fields since his undergraduate days on this campus," Eisgruber said. "We are proud to have him back as a member of our mathematics faculty and delighted that his prodigious talents have been recognized with this national award."

Pardon is the seventh Princeton faculty member — three of whom are in mathematics — to have received the Waterman Award: Charles Fefferman, the Herbert E. Jones, Jr. '43 University Professor of Mathematics (who received the inaugural award in 1976); William Thurston, a mathematics professor who later went to Cornell University (1979); Edward Witten, a physics professor now at the Institute for Advanced Study (1986); Gang Tian, the Eugene Higgins Professor of Mathematics (1994); Dalton Conley, the Henry Putnam University Professor in Sociology (2005); and Mung Chiang, the Arthur LeGrand Doty Professor of Electrical Engineering (2013). Terence Tao, who received his Ph.D. in mathematics from Princeton in 1996, won the Waterman Award in 2008.

"It's humbling to be included on this list, especially with the brilliant mathematicians who I am exceedingly lucky to have as colleagues," Pardon said.

"He has made many amazing mathematical accomplishments. In addition to brilliantly solving Gromov's knot-distortion problem as a Princeton senior, his three-dimensional solution to the Hilbert-Smith conjecture was the first general result for this famous conjecture in nearly 60 years," Gabai said. "His very deep work in symplectic geometry is crucial to the foundation of the subject. The Waterman Prize puts John in extremely rarefied company."

Pardon, who is from Chapel Hill, North Carolina, is the son of Duke University mathematics professor William Pardon. In high school, Pardon took math courses at Duke and excelled in numerous national and international math competitions, including winning a gold medal at the International Olympiad in Informatics in three consecutive years. During his senior year, he published his first paper, which generalized a previous solution to the carpenter's rule problem in discrete geometry to closed curves. The paper won second place in the 2007 Intel (now Regeneron) Science Talent Search.

Pardon received his doctorate in mathematics from Stanford in 2015. That same year he was appointed a Clay Research Fellow through the Clay Mathematics Institute based in Oxford, United Kingdom.

Outside of mathematics, Pardon is an accomplished cellist, having played the instrument since he was 6. He also is fluent in Chinese, which he studied while at Princeton.