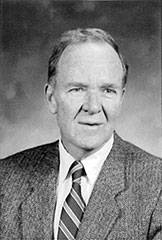 Photo courtesy of the Wightman family

Renowned mathematical physicist and Princeton University Thomas D. Jones Professor Emeritus Arthur Wightman died of Alzheimer's disease Jan. 13 at Veterans Nursing Home in Edison, N.J. He was 90. He was best known for his pioneering and far-reaching research on the mathematical foundations of quantum field theory.

Wightman grew up in Rochester, N.Y. He attended Yale University and had Henry Margenau and Leigh Page as advisers. As a doctoral student at Princeton, Wightman studied under John Wheeler before earning his Ph.D. in physics in 1949. Wightman joined the University's faculty in 1949 and was granted emeritus status in 1992. He was widely known as an excellent teacher and mentor, generous with his time and ideas. He advised more than 20 graduate students.

Wightman is one of the founders of modern mathematical physics. He provided for the first time a mathematically elegant and axiomatic approach to quantum field theory in which all-important physical results such as the parity-charge-time (PCT) symmetry and the connection between spin and statistics became theorems. The Wightman theorems on the reconstruction of a quantum field theory from the Wightman functions and the Bargmann-Hall-Wightman theorem on the structure of their analytic continuation are unfading foundation stones of modern physics. Together with Rudolf Haag in Germany, Wightman brought quantum field theory to a fully axiomatic description, fulfilling at least in part the dream expressed by David Hilbert in his sixth problem of 1900.

For his work, he received the 1969 Dannie Heinemann Prize for Mathematical Physics from the American Physical Society and American Institute of Physics, and the inaugural Henri Poincaré Prize from the International Associate of Mathematical Physics in 1997. He was a member of the National Academy of Sciences, Fellow of the Royal Society of Arts, London, Fellow of the American Academy of Art and Sciences, a Doctor of Science of the Swiss Federal Institute of Technology (1968) and Doctor Honoris Causa of Göttingen University (1987).

Like much of Wightman's work, the axioms stemmed from his pursuit of a deeper understanding of how physics worked, said Arthur Jaffe, a Harvard University professor of mathematics and theoretical science. Jaffe earned his doctorate in physics from Princeton in 1966 with Wightman as his adviser (Jaffe also earned his bachelor's degree in chemistry from the University in 1959). Wightman enjoyed delving into existing physics ideas to illuminate those elements that were actually not understood, Jaffe said.

"There is an enormous difference between what you think you know and what you really know, and it was the latter that Arthur strove to uncover," Jaffe said. "His work set the standard for a high road to understanding the deeper meaning of physics."

Jaffe described Wightman as a rigorous researcher who always acknowledged past scientific ideas, yet relentlessly pushed himself and his students toward the next steps in their work. Though he studied under Wightman for four years, the two had frequent contact for decades about their work. Jaffe is well known for his work in constructive quantum field theory, which focuses on showing that Wightman's axioms could be realized with concrete examples.

"I can say I've been a student ever since," Jaffe said. "Arthur set me on the path of what I spent most of my life doing. I think of Arthur as the spiritual leader of mathematical physics and his death really marks the end of an era. It's hard to think of who will step into Arthur's shoes with the same wonderful breadth of interests, insights, understanding of people and ability to inspire the best from others. In the meantime, I mourn his loss."

Despite his work in the dense and esoteric field of mathematical physics, Wightman's wife Ludmilla said her husband was sociable and well read on many subjects. Ludmilla, a fellow physicist who specialized in high-energy physics, said the couple "never stopped talking from the moment we woke up to the moment we fell asleep." His reputation and rapport with scientists around the world kept them in touch with a string of colleagues and students.

Princeton Professor of Mathematics Edward Nelson often sought Wightman's input on his recognized work in mathematical quantum field theory. Approachable and helpful to his colleagues, Wightman would turn a seemingly simple answer into a fascinating and sprawling exploration of the topic at hand, said Nelson, who joined Princeton's faculty in 1959.

"He was a tremendous source of information to his students and colleagues," Nelson said. "I frequently went to him with questions and got a very full and comprehensive answer. Many people had that experience with him: Ask a simple question and get a very complicated answer. I often got much more than I asked for, but it was worth it."

Princeton Professor of Physics Chiara Nappi recalled that conversations with him on any subject were delightful. "There is nothing such as a quick answer by Arthur to any question," she said.

"He knows so much, he has so much to say, so many details to reveal, so many connections to make. You sit there listening to all these facts that he remembers in exquisite detail, totally fascinated. You have forgotten where you started from and have no idea of where he is going. It takes you by surprise when finally he closes his multiple loops and sub-loops in his discourse, and gets back exactly where he started from. Hours later, you finally have the answer to the question you asked long ago, and in the process you have learned an awful lot about a lot of things you did not even know existed, and enjoyed every moment of it," Nappi said.

In addition to his wife, Wightman is survived by his stepson Todor Todorov. A memorial service will be planned. The Princeton Department of Physics is collecting remembrances of Wightman for a memorial Web page. Comments should be sent to Regina Savadge.