Following his muse to create an unconventional clown 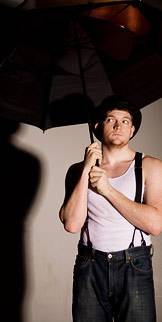 Beginning Friday, April 24, senior Sam Zetumer, who is earning a certificate in theater and dance, will perform his senior thesis production, "Good Winks Here," a one-man show about a clown that is not a clown show.

Live performance set Sam Zetumer's senior thesis performance, "Good Winks Here," will be performed in the Berlind Theatre Rehearsal Room at 8 and 10:30 p.m. Friday and Saturday, April 24-25, and Thursday through Saturday, April 30-May 2. Tickets are available through University Ticketing at (609) 258-9220 or the McCarter Theatre Center box office at (609) 258-2787.

From the April 20, 2009, Princeton Weekly Bulletin

He is a math major who is earning a certificate in theater and dance. He scribbles math equations on the chalkboard while waiting for rehearsals to begin. He currently is completing two senior theses: one on set theory, and one on clowning.

Zetumer enjoys immersing himself in two such different disciplines. Math requires him to "shut down external awareness," he said, while theater asks "that I exist in this communal space." Alternating from one to the other is "like going 60 and then going in reverse," he explained.

Beginning Friday, April 24, Zetumer will perform his senior thesis production, titled "Good Winks Here," a one-man show about a clown that is not a clown show — no juggling and no gags.

"It's about a weird human being who's struggling to find out how his world works and failing very badly at it," Zetumer said. "It's a style of clowning that's all about vulnerability." 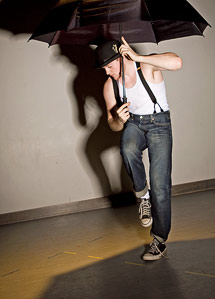 Zetumer said his show is "about a weird human being who's struggling to find out how his world works and failing very badly at it. It's a style of clowning that's all about vulnerability."

"Sam's doing something very brave here — creating his own material and going out there, totally alone, to share his deep interest in clown work with an audience," said Tim Vasen, a lecturer in theater and dance and the Lewis Center for the Arts who is one of Zetumer's thesis advisers. "What he's doing is, first of all, funny, and also sometimes haunting, like the best clowns in the Bill Irwin/Charlie Chaplin/Buster Keaton tradition always are."

"He's a systems nut — be it advanced math or physical technique," he said. "Clown work is also a system, and what Sam's doing in his rehearsals is playing with that system, testing it against the lights and chairs and umbrellas and floors and walls, almost like scientific research."

Zetumer studied physical comedy last summer when he took courses on clowning technique offered by the Pig Iron Theatre Company in Philadelphia. The company describes itself as a dance-clown-theater ensemble that seeks to break the boundaries of dance, drama, clowning, puppetry, music and text. His summer with the troupe was supported by the Lewis Center's Alex Adam '07 Award, which Zetumer won last year. The award funds summer projects that lead to the creation of an original work of art.

Zetumer first worked with members of Pig Iron during his freshman year, when they taught a physical theater class at Princeton that included clowning. After graduation Zetumer will move to Philadelphia to work for Pig Iron as an assistant stage manager.

A native of San Diego, Zetumer was drawn to Princeton because of the University's strengths in math and theater. For his other thesis, Zetumer is constructing a new version of set theory, which is an important foundational system for mathematics.

His adviser, Professor Edward Nelson, described Zetumer as "fiercely independent. He works hard on his own to resolve problems without asking for help."

During his time at Princeton, Zetumer has appeared in several theatrical productions, portraying Prince Shuisky in Alexander Pushkin's play "Boris Godunov" and performing in "The Winter's Tale," "All My Sons" and "Romeo and Juliet." But for Zetumer, "Good Winks Here" promises to be his most memorable role.

The piece "is serious work, but it's funny and touching," said Vasen, who described Zetumer as "extremely creative" and unconstrained. "Sam has always followed his own muse." 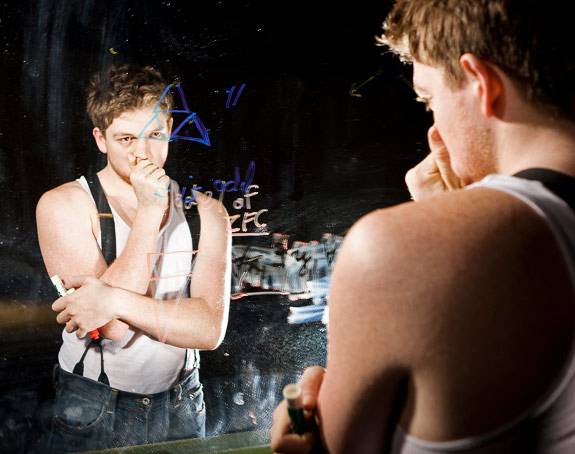 A math major, Zetumer also is completing a senior thesis on set theory. He often scribbles math equations while waiting for rehearsals to begin.