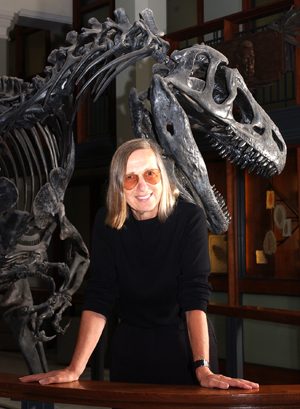 Princeton geoscientist Gerta Keller and a research team have compiled new evidence disproving a popular theory that an asteroid wiped out the dinosaurs about 65 million years ago. Examinations at several new sites have produced biotic evidence -- the fossilized traces of plants and animals -- indicating that a massive die-off did not occur directly after a proposed asteroid strike but much later. (Photo: Denise Applewhite)

A Princeton University geoscientist who has stirred controversy with her studies challenging a popular theory that an asteroid wiped out the dinosaurs has compiled powerful new evidence asserting her position.

Gerta Keller, whose studies of rock formations at many sites in the United States, Mexico and India have led her to conclude that volcanoes, not a vast meteorite, were the more likely culprits in the demise of the Earth's giant reptiles, is producing new data supporting her claim.

Keller, a Princeton professor of geosciences, and several co-authors lay out the case in a paper published April 27 in the Journal of the Geological Society of London. Examinations at several new sites have produced "biotic evidence" -- the fossilized traces of plants and animals tied to the period in question -- indicating that a massive die-off did not occur directly after the strike but much later.

In addition, Keller and other researchers have found "aftermath" sediments that remained undisturbed and showed signs of active life, with burrows formed by creatures colonizing the ocean floor. This would quash a theory advanced by some that a massive tsunami followed the impact, Keller said.

"Careful documentation of results that are reproducible and verifiable will uncover what really happened," Keller said. "This study takes an important step in that direction."

Much of the new data comes from a trench dug out of low-lying hills in northeastern Mexico at a site called El Peñon. A group of Princeton undergraduates accompanying Keller on a field trip to Mexico in 2004 excavated the area and uncovered the new evidence. Keller and her team have been analyzing that evidence for the last several years.

Understanding what caused the dinosaurs to disappear remains a great mystery. Theories attempting to explain it include asteroid or cometary impacts, volcanoes, global climate change, rising sea levels and supernova explosions. Scientists know that at a point about 65 million years ago, some phenomenon triggered mass extinctions on the land and oceans.

At many locations, the K-T boundary is clearly visible in rock formations, which contain a thin layer of clay rich in the element iridium. Because iridium is more common in asteroids and comets than on Earth, scientists proposed in 1980 that an asteroid or comet must have struck Earth just at the boundary and caused the mass extinction of dinosaurs and many other animals. They thought they had found the culprit when they discovered the Chicxulub impact crater in Mexico's northern Yucatan. 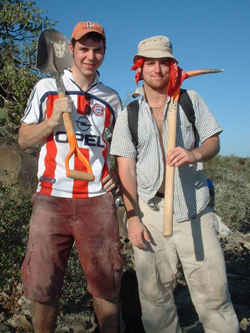 Much of the new data comes from a trench dug out of low-lying hills in northeastern Mexico at a site called El Peñon. A group of Princeton undergraduates, including Richard Lease (left) and Steven Andrews (right), accompanying Princeton Professor Gerta Keller on a field trip to Mexico in 2004 excavated the area and uncovered the new evidence. Keller and her team have been analyzing that evidence for the last several years. (Photo: Courtesy of Gerta Keller)

Keller began studying the K-T boundary in 1984 -- the year she arrived at Princeton. She discovered that the evidence for the asteroid theory was not so clear. In field investigations, she and her team of students and collaborators found populations of Cretaceous age foraminifera, one-celled ocean organisms that evolved rapidly during select geological periods, living on top of the impact fallout from Chicxulub. The fallout from the asteroid that struck Chicxulub is visible as a layer of glassy beads of molten rock that rained down after the impact. If this impact caused the mass extinction, then the foraminifera above the impact glass beads should have been the newly evolved species of the Tertiary age.

Using these fossil remains to construct a timeline, she and her team were able to date the surrounding geologic features and begin to piece together proof that the impact occurred 300,000 years before the great extinction.

Over the years, Keller's group has amassed evidence for as many as four major events widely separated in time in that area of Mexico as well as in Texas. The oldest of the four events is the Chicxulub impact, seen by the fallout of glass beads. The second is about 150,000 years later and seen in a layer of sandstone with Chicxulub impact glass beads that were transported from shallow shore areas into deep waters during a sea level fall and was commonly interpreted as a tsunami generated by the Chicxulub impact. About 100,000 to 150,000 years later, the third event struck at the time of the K-T boundary with its iridium layer and mass extinction. This event may represent a second large impact or massive volcanism. The fourth event is possibly a smaller impact as evidenced by another iridium layer about 100,000 years after the mass extinction.

Advocates of the Chicxulub impact theory suggest that the impact crater and the mass extinction event only appear far apart in the sedimentary record because an earthquake or tsunami caused slumps and mixing of sediments surrounding the Gulf of Mexico. To date no evidence of major disturbance has been found in the sediments.

Keller says her team's newest research, however, confirms what she has found in earlier studies -- that the sandstone complex that overlays the impact layer was not deposited over hours or days by a tsunami but over a long time period. From El Peñon in Mexico and other sites listed in the new study, the scientists were able to calculate that between 13 and 30 feet of sediments were deposited at a rate of about an inch per thousand years after the impact. These sediments separating the impact layer from the sandstone complex and the overlying mass extinction were formed by normal processes. There is evidence of erosion and transportation of sediments in the sandstone layers, but no evidence of structural disturbance, Keller said.

Also at El Peñon, the researchers found 52 species present in sediments below the impact layer and counted all 52 still present in the layer above it, indicating that the impact has not had the devasting biotic effect on species diversity as has been suggested. "Not a single species went extinct as a result of the Chicxulub impact," Keller said.

In contrast, she noted, at a nearby site known as La Sierrita where the K-T boundary, iridium anomaly and mass extinction are recorded, 31 out of 44 species disappeared from the fossil record at the K-T boundary.

"Keller and colleagues continue to amass detailed stratigraphic information supporting new thinking about the Chicxulub impact and the mass extinction at the end of the Cretaceous," said Richard Lane, program director in the National Science Foundation's division of earth sciences, which funded the research. "The two may not be linked after all."

Keller suggests that the massive volcanic eruptions at the Deccan Traps in India may be responsible for the extinction, releasing massive amounts of dust and gases that could have blocked sunlight, altered climate and caused acid rain. The fact that the Chicxulub impact seems to have had no effect on biota, she said, despite its 6-mile-in-diameter size, indicates that even large asteroid impacts may not be as deadly as imagined.

She regards the latest evidence as sufficiently convincing and compelling to allow her to move on and investigate further the evidence for Deccan volcanism as being at the root of dinosaur extinction. But she does not expect her teams' present work will stop the raging debate at the heart of this controversy.

"The decades-old controversy over the cause of the K-T mass extinction will never achieve consensus," Keller said. But consensus, she added, is not a precondition to advancing science and unraveling truth. "What is necessary is careful documentation of results that are reproducible and verifiable," she said.

Co-authors of the paper are Thierry Adatte of the University of Lausanne in Switzerland; Alfonso Pardo Juez of the CES Fundación San Valero in Spain, who earned a Ph.D. from Princeton in 1995; and José Lopes-Oliva of the University of Nueva León in Mexico, who earned a Ph.D. from Princeton in 1996. The journal is published by the Geological Society of London. The research was funded by the National Science Foundation and the Swiss National Fund.