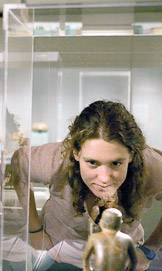 Students in professor Lawrence Rosen's "Cultural Property and the Arts of Native North America" are examining Native American art through an anthropological perspective and considering the cultural policy around the buying, selling and displaying of artwork belonging to native people. Here, senior Denali Barron examines a stone figure of a shaman from the Olmec culture during a class visit to the Princeton University Art Museum. 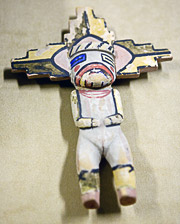 A painted wooden kachina doll was made by the Hopi to educate children.

From the May 4, 2009, Princeton Weekly Bulletin

In a back room at the Princeton University Art Museum, the students in professor Lawrence Rosen's new anthropology course received a firsthand lesson on the issues surrounding art, authenticity and ownership.

With their eyes and hands, students took in ancient pieces from the American Southwest of Mimbres pottery and Hopi kachina dolls -- representations of holy figures made to educate children. One item, a ceremonial bowl used to cover the faces of the dead in burial, recently was discovered to have been repainted with figures sometime since the 1960s. Rosen saw an opportunity and dove in.

"With the fake, is that 'cultural property' the same way as something that's not fake?" Rosen asked the students gathered around the table.

Rosen is teaching "Cultural Property and the Arts of Native North America," which examines Native American art through an anthropological perspective and considers the cultural policy around the buying, selling and displaying of artwork belonging to native people. Rosen, the William Nelson Cromwell Professor of Anthropology, has worked as an attorney on cases involving Native American burials and artifacts, but this course is his first serious examination of native art itself.

As an expert in anthropology and law rather than art, Rosen is relying on his 18 students to bring their curiosity and their own research to the three-hour Tuesday seminars he calls a "one-room schoolhouse." As a course requirement, students must give a presentation sharing visual materials with the class.

"I have lots of background questions I want to raise, and we move back and forth between the anthropological and art theories we're trying to figure out together," said Rosen, who joined the faculty in 1977 and now tries to teach a new course each year. His other areas of focus include North Africa and the Middle East.

Rosen (third from left) and his students examine Native American art to explore the meanings different people and cultures attach to objects.

Freshman Tim McGinnis, who has a longstanding interest in Native American culture, was excited when he saw the course among the anthropology department's listings.

"I feel that the addition of classes on Native American topics is both beneficial and necessary for a curriculum," he said. "I've thoroughly enjoyed the exploratory discussions."

In an anthropology department that often focuses on religion, race, media and other elements of culture, students such as junior Katie Benedict were happy to incorporate art into their studies.

"As someone who enjoys going to museums on occasion, I wanted to figure out how that interest could relate to my academic interest in anthropology," she said. "I was excited to see the department widening its horizon into this field of study."

One of the course's key resources is the Princeton University Art Museum and its Art of the Ancient Americas collection. The class, funded in part by a Mellon Foundation grant to incorporate the museum into coursework, includes three group visits to the museum over the course of the semester. Rosen has worked closely with Bryan Just, the museum's Peter Jay Sharp Curator and Lecturer in the Art of the Ancient Americas and a lecturer in art and archaeology, who spoke with the students about the American Southwest artifacts. Students also have been able to learn about the process of creating an upcoming exhibition on art from the Bering Straits. 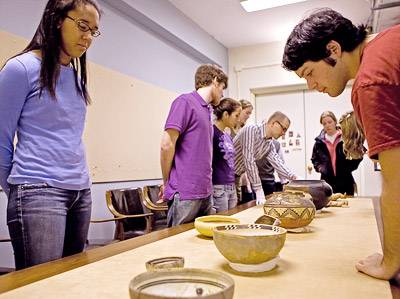 In the art museum's reserve room, students view pottery and figurines from the American Southwest not on display in the museum galleries, with curator Bryan Just (in striped shirt) relaying the history of the pieces.

The course covers art, past and present, from the Northwest coast and the Arctic regions as well as the American Southwest, and examines how Indian and non-Indian cultures represent each other.

"It's very wide-ranging," Rosen said. "What holds it together is that I am looking at religion, the nature of politics, cultural values -- I'm sneaking anthropology at them sideways."

After the second visit to the museum, Rosen and his students moved to a classroom in the Marquand Library of Art and Archaeology for a discussion on the idea that cultures produce different types of art (portraits, ceramics, figurines) based on their cultural values, with the aim of understanding the painted wooden kachina dolls they had seen earlier. They began by discussing painted portraits and the many things that students would be able to glean from them, such as the time period and the class status of the subject.

"This is one of the places where our cultural assumptions and our way of viewing things may be very different from other peoples," Rosen said.

Kachina dolls were meant to teach children about holy figures, and perhaps that was not possible through other types of art, Rosen said. 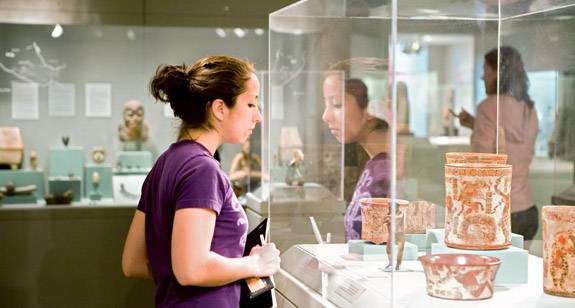 One of the course's key resources is the Princeton University Art Museum and its Art of the Ancient Americas collection. Sophomore Elena Martinez participated in one of three group visits by the class to the museum during the semester.

"Learning through the tactile experience of, manipulation of [and] dressing of these types of figurines might have a psycho-logistic import that merely looking at a picture or merely being told about something may not have," said Rosen, with students mentioning Barbie dolls and GI Joe figurines as examples to which they could relate.

Freshman Stephanie "Q" Miceli has enjoyed the class' emphasis on individual discovery and sharing of knowledge, as well as the broad exploration of the definition of art versus cultural property. When her parents visited her at Princeton, Miceli took them to the museum to relay the lessons she had learned in class.

"The reserved artifacts we observed on the second visit [to the museum] were quite interesting and returned us to the question: If an item is a forgery, does it lose all of its value as 'art'?" she asked. "My views on Native American art have certainly changed; in fact, I am not entirely sure what to categorize as art anymore."