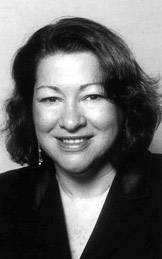 Princeton alumna and trustee Sonia Sotomayor has been nominated by President Barack Obama to serve on the U.S. Supreme Court. If confirmed, she would be the court's first Latina justice.

She currently sits on the U.S. Court of Appeals for the 2nd Circuit.

"What Sonia will bring to the court is not only the knowledge and experience acquired over the course of a brilliant legal career, but the wisdom accumulated from an inspiring life's journey," Obama said in announcing her nomination May 26 at the White House.

Princeton President Shirley M. Tilghman said, "We are proud and delighted that Sonia Sotomayor has been nominated for the Supreme Court. As an undergraduate, Sonia was an excellent student and an exemplary University citizen, graduating summa cum laude and earning the highest award we confer for her strength of character and leadership. Eight years ago we presented her with an honorary degree and two years ago she became a Princeton trustee. She has brought to that role the same kind of insight, discernment, wisdom and good judgment that we are confident she will bring to the deliberations of the highest court in the land."

Sotomayor was presented with an honorary doctor of laws degree by the University in 2001 for her "wisdom and judgment that cross cultural boundaries." In 2007, she was elected to a four-year term on the Board of Trustees.

If confirmed by the Senate to fill the seat held by retiring Justice David Souter, Sotomayor would be the 11th Princetonian and first female graduate to serve on the Supreme Court. Her appointment also would mark the first time two Princeton alumni have served together on the court since 1860. Other Princeton alumni who have served on the court and the dates of their service are: