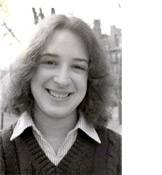 Elena Kagan as a Princeton undergraduate.

When she takes the oath of office to fill the seat held by Justice John Paul Stevens, who retired in June, she will be the fourth woman to serve on the high court, and the third consecutive Princeton University graduate to be appointed as a Supreme Court justice.

"Princeton is very proud of Elena Kagan, and we congratulate her on her confirmation," Princeton President Shirley M. Tilghman said. "As a university that seeks to prepare its students for lives of service, we are very pleased that the last three Supreme Court justices all did their undergraduate work at Princeton."

It is the first time since 1842 that three of the nine sitting justices attended Princeton, although at that time the University was known as The College of New Jersey.

Prior to her confirmation as solicitor general, Kagan was the Charles Hamilton Houston Professor of Law and dean of Harvard Law School. She joined the Harvard faculty in 1999 and taught administrative law, constitutional law, civil procedure and seminars on issues involving the separation of powers before she was appointed dean in 2003.

Kagan previously served in the White House from 1995 to 1999, first as associate counsel to President Bill Clinton and then as deputy assistant to the president for domestic policy and deputy director of the Domestic Policy Council. In those positions she helped form the executive branch and implement law and policy in a wide range of areas including education, crime and public health.

Early in her career, Kagan was a professor at the University of Chicago Law School; clerked for Judge Abner Mikva of the U.S. Court of Appeals for the District of Columbia Circuit and then for Justice Thurgood Marshall of the U.S. Supreme Court; and worked as an associate in the law firm of Williams & Connolly in Washington, D.C.

Kagan is the 11th Princeton graduate to sit on the U.S. Supreme Court. In 1842 the three Princetonians who served on the court concurrently were justices Smith Thompson, Peter Daniel and James Moore Wayne, although Daniel was a member of the class of 1805 and did not graduate from Princeton.

The Princeton alumni who have served on the court and the dates of their service are: