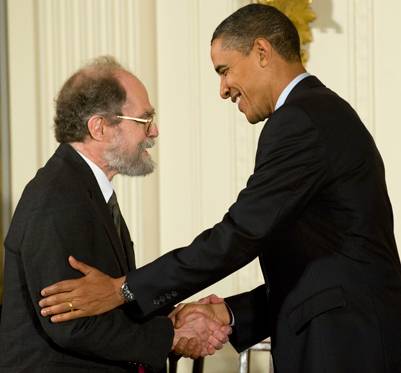 James Gunn (at right), the Eugene Higgins Professor of Astronomy at Princeton, received the National Medal of Science in a ceremony Wednesday, Oct. 3, at the White House.

Elaine Fuchs (below), who earned her Ph.D. in biochemical sciences from Princeton in 1977, also was honored. She is the Rebecca C. Lancefield Professor at Rockefeller University.

They and the seven other scientists and engineers selected in the 2008 group were presented with their awards by President Barack Obama.

The medal is the highest honor bestowed by the U.S. government upon scientists and engineers. 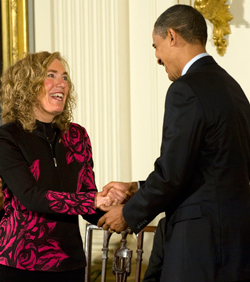 "These [researchers] are national icons, embodying the very best of American ingenuity and inspiring a new generation of thinkers and innovators," Obama said. "Their extraordinary achievements strengthen our nation every day -- not just intellectually and technologically but also economically, by helping create new industries and opportunities that others before them could never have imagined."

More information is available in a story announcing the awards.