Perspective on: Exploring race in America 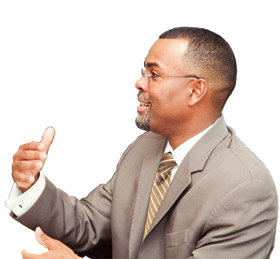 Read a story about the new effort being launched by the Center for African American Studies to become the leading resource for the public's understanding of race in America. (Photo: Brian Wilson)

What made you decide to focus your research and teaching on the lives of African Americans?

In my view, this is not simply about black folks. Rather, it's about this precious experiment called American democracy. This becomes clear if you hold the view, as I do, that democracy is the best form by which everyday people can not only dream dreams, but also make those dreams a reality. When we tell the story of black people in this nation as a beacon of democratic possibility, then we're telling a story in particular about practices that frustrate democracy, which short-circuit it. There are many pernicious ideologies that are frustrating American ideals day in and day out: corporate greed, patriarchy, white supremacy, etc.

For me democracy is about more than just a bicameral system. It's more than just elections. Democracy is an ethical ideal. And it's an ethical ideal that's not reducible just to current institutions; it's not reducible to just a philosophy. It's really about a certain way of being in the world. And so, if your concern is democracy -- small "d" -- as mine is, and you want to tell a story about how we've fallen short, black folk become one of the best places to turn.

Do you believe that the election of President Barack Obama, the nation's first black president, signals an advance in race relations and dialogue about race?

As a nation, we have to escape either/or thinking. We must celebrate his election. We have to celebrate this moment, this accomplishment in the history of the nation. We are not Jim Crow America; if you think that, you've lost your mind. But we know that the sound of racism is evident in the voice of the birthers, in the voice of the tea parties. A minority of people in this nation will not grant legitimacy to Barack Obama's presidency because he's a black man, and if we don't understand that, then we are all living an illusion.

Are conversations about race today different than they were a year ago?

Part of the challenge of this moment is that every time racism rears its ugly head, the clamor is going to be so loud because it's going to call into question our current self conception: "Oh, we can't be this! Look who our president is." So the question becomes, are we really who we think we are? Now, whenever racism evidences itself, either we have to evade it or we have to engage in this really melodramatic handwringing, both of which lead to surface analysis and not really interesting conclusions.

African American studies can help us get beyond all of this.

What is the role of African American studies in education?

It's important for us to think about how a liberal arts education takes shape, and the sorts of questions that are being asked about African American studies, and how they reveal the inherent politics in the production of knowledge. What we're suggesting when we say African American studies is not just about African Americans is that within this field of inquiry, we can talk about the human condition and the various ways in which human beings -- particularly in the United States -- have made sense of their lives. You don't deal with that in the abstract; you come at it from a particular vantage point.

For example, when we read (Ivan) Turgenev or when we read (Fyodor) Dostoyevsky … we don't simply say, "Well this is Russian literature, and it's only relevant to Russian people." We're saying that this literature gives us insight into the human enterprise.

What we're saying is that some folks who believe that African American studies is just narrow identity studies, they buy into a false notion that there is some way of thinking about human doings and sufferings apart from particular histories, particular places and particular peoples.