TigerTransit, Princeton University's shuttle system, this fall has launched 10 new buses that run on B20 diesel fuel. The shuttles also are traveling on new routes that include 701 Carnegie Center as well as shopping and dining venues.

The biodiesel fuel powering the buses has demonstrated significant environmental benefits by reducing carbon dioxide emissions, one of the goals of the University's Sustainability Plan. The new buses also feature increased seating capacity from 14 to 30, low floors with full accessibility and a rear access wheelchair ramp with capacity on the vehicle for two wheelchairs.

Each bus has a front rack for two bicycles and light-emitting diode (LED) signage on the front and sides for better visibility at night. There are doors in the front and the back for quicker loading and unloading. Each bus also is equipped with "TigerTracker," a Web-based GPS that enables riders to track the location of buses online by computers and by Web-enabled mobile devices. 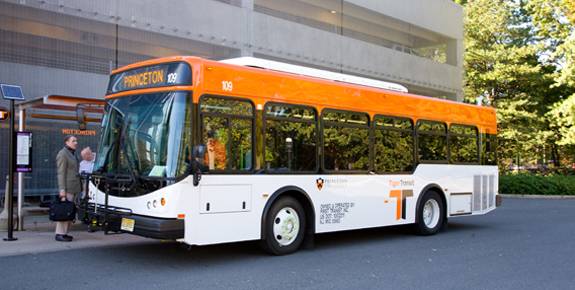 One of the new biodiesel-powered buses stops for passengers at the West Garage. (Photo: Brian Wilson)

Several changes also have been made to the shuttle routes:

• The West Line, which provides shuttles from the Princeton Theological Seminary Apartments in West Windsor to Palmer Square, has been extended to include service on Nassau Street to the Friend Center and Robertson Hall from 7 a.m. to 7 p.m. weekdays. The West Line also is making a new stop at the MarketFair shopping center and, beginning Nov. 2, will stop at 701 Carnegie Center, the new home of the University's finance and treasury operations and most information technology departments.

• The Express Line, which offers service between Lawrence Apartments and the Friend Center, has been renamed the Tiger Line.

Running on alternate Saturdays is the Nassau & Harrison Line. It provides service from graduate housing locations to shops and restaurants along Nassau and Harrison streets, including the Whole Earth Center, the Princeton Shopping Center, the Blue Point Grill and Palmer Square. Service hours are 3 p.m. to 9:30 p.m.

Other TigerTransit lines run through the center of campus, on the east side of campus and to the Forrestal Campus. Many connect with New Jersey Transit and the Princeton Borough Free B shuttle.

For more information on schedules, visit the Transportation and Parking Services website or call (609) 258-3157.