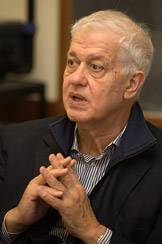 Pietro Frassica, professor of French and Italian, leads the class "Topics in Contemporary Italian Civilization -- Italy: The Land of Slow Food," which explores the art of cookery in relation to people's environment and history. Frassica, an authority on Italian literature, offered his first course exploring the importance of food in literature in 1992. (Photo: Brian Wilson)

Instructor: Pietro Frassica, professor of French and Italian. Frassica's research and teaching focus on Italian literature of the Renaissance, contemporary literature and the literature of gastronomy. A native of Italy and recipient of the Italian-American Hall of Fame award, he has written more than 80 scholarly and popular articles and has written or edited several books, including "The Futurist Cookbook." 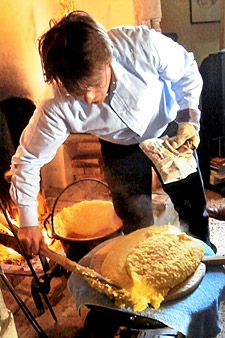 A cook prepares polenta using medieval utensils during the group's 2008 visit to a house near Milan where a traditional medieval meal is prepared. (Photo: Courtesy of Pietro Frassica)

Description: Combining an analysis of Italian literary texts with works of visual art, the course -- which began in fall 2007 -- explores the art of cookery in relation to people's environment and history. The course, conducted in Italian, reviews works from the Middle Ages to the 21st century by writers and artists including Dante, Boccaccio and Michelangelo. Students examine concepts that form the foundation of the Slow Food Movement, which began in Italy in the 1990s to counteract the increase in fast food and the decrease in traditional local foods as well as to raise awareness about food choices from environmental and economic perspectives. The movement is now active in more than 100 countries; a Princeton student group is advised by Frassica.

Frassica and the students travel at the end of the semester to visit the University of Gastronomic Sciences in Pollenzo, Italy, where they participate in a seminar given by Slow Food Movement founder Carlo Petrini. The group also visits a medieval house near Milan where a traditional medieval meal is prepared as well as vineyards, chocolate factories and places where mozzarella is made.

Inspiration: Frassica, a Princeton faculty member since 1976, offered his first course discussing the importance of food in literature in 1992. "Today, after seeing how serious the students are in the courses I teach, I can say without hesitation that gastronomy is recognized as a serious discipline," he said. 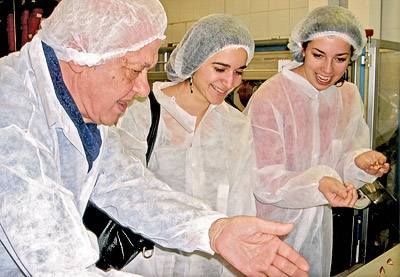 From left, Frassica and 2008 graduates Lara Klainerman and Cate Adams visit the Gobino chocolate factory in Turin during their travels in Italy. (Photo: Courtesy of Pietro Frassica)

"Carlo Petrini has been a personal friend of mine since the early 1980s, well before the Slow Food Movement was founded. My long friendship with Petrini and the emerging, extraordinary interest in the serious study of food encouraged me to offer this course," Frassica said. "I hope to further educate and inspire my students, while informing their participation in the growing international dialogue regarding food choices."

Students say: "I was born and raised in Montreal, but my father is Italian and my mother is Slovenian, so I grew up in a food-obsessed Italian-speaking household. (My maternal grandparents owned a Slovenian restaurant for many years, and my older brother is now a chef.) Given that I have spent countless hours poring over old Italian and French cookbooks, this course combining literature and gastronomy proved to be irresistible," said senior Luca Barone. "I also believe that studying the history of material culture is important, because you gain a better understanding of a society by studying its customs and manners, which are manifestations of its values and philosophy."

During class sessions, Frassica leads the students through discussions of works from the Middle Ages to the 21st century by writers and artists including Dante, Boccaccio and Michelangelo. (Photo: Brian Wilson)

Senior Joseph Vellone said, "I served as the president of Slow Food Princeton, so I was naturally drawn to a course that explored the foundations of the movement in Italian literature. It didn't hurt that Professor Frassica is one of my favorite professors: His seminars are the perfect balance of academic rigor and playful discussion. ... What I've found most compelling are the surprising origins of the way we eat today. Today our food choices are made with a focus on the health benefits of food, on local agriculture and on eating the right amount of fruits and vegetables, and these were the same priorities that Italians had during the Renaissance. The course has allowed me to discover that our modern conceptions of food and diet actually trace their origins back to the Renaissance, and that Slow Food's emphasis on pleasure and responsibility in eating brings us back to this time. In moving forward in our diet, we've actually come full circle."

Vellone added, "That a Woodrow Wilson School major can prepare for a career in food policy by studying Italian Renaissance literature says something about the relevance of Professor Frassica's course to so many students. Whether we realize it or not, food is such a central part of our lives, and by examining it through this lens we can all learn something that will change the way we eat and ultimately the way we live." 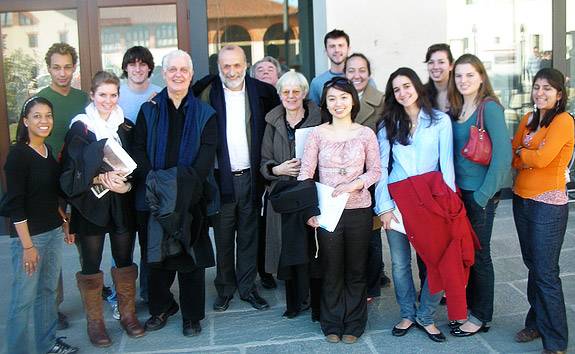 At the end of the semester, the class visits the University of Gastronomic Sciences in Pollenzo, Italy, and meets with Carlo Petrini, founder of the Slow Food Movement. Here, the students and Frassica join Petrini (on Frassica's left) during a visit in 2008. (Photo: Courtesy of Pietro Frassica)

Founder of Slow Food movement Carlo Petrini will give lecture--CANCELED