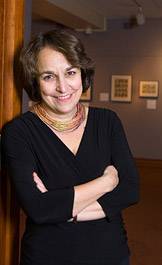 In her book "Passing Strange," history professor Martha Sandweiss uncovers the secret double life of Clarence King, a well-known figure in the history of the American West. King, who was white, with blond hair and blue eyes, had been passing as a black man to be with the woman he loved, Ada Copeland, a former slave. In the classroom, Sandweiss teaches students how to conduct the same kind of original research with primary-source documents. (Photo: Brian Wilson)

For three decades, history professor Martha Sandweiss had wondered about a little-noticed detail in the life of Clarence King, a well-known figure in the history of the American West. King, a 19th-century geologist and author, was a leading surveyor who mapped the West after the Civil War.

Back in graduate school, Sandweiss had read a 500-page biography of King that devoted just five pages to a secret, 13-year relationship that King, who was white, had with a black woman.

"Thirteen years, five pages? It just didn't seem right to me," said Sandweiss, a historian of the American West who joined the Princeton faculty last year.

A few years ago, Sandweiss decided it was time to investigate. Poring through census documents that were available online, she was able to discover in a matter of minutes that King, who was blond and blue eyed, had been leading a double life as a white man passing as a black man.

"Once I uncovered that, I knew I had to try to unravel the story," she said.

The result is "Passing Strange: A Gilded Age Tale of Love and Deception Across the Color Line," published earlier this year by The Penguin Press.

The book uncovers a secret double life -- King, a well-regarded explorer from a prominent Newport, R.I., family, also lived as James Todd, who professed to be a Pullman porter and steelworker. At gentleman's clubs and elite residential hotels in New York City, he was the witty white scientist and author who was called "the best and brightest of his generation" by Secretary of State John Hay. At 48 N. Prince St. in Flushing, Queens, he was the black common-law husband of Ada Copeland, who had been born into slavery in Georgia during the Civil War, and the father of their five children.

Why did King live this way? The only logical explanation, according to Sandweiss, is that he was in love.

"He could have had a mistress, and he didn't," Sandweiss said. "He gave this woman and these children his name -- OK, it wasn't his real name -- but he provided for them. He hired piano teachers and tutors for the children, he found them homes, and it came at a tremendous personal cost." King was deeply in debt for years, and at one point he suffered a nervous breakdown.

Sandweiss pieced together King's secret life with extensive research, following the few clues that were available. After unearthing the census documents -- in which Ada falsely reported that her husband, whom she knew as James Todd, had been born in the West Indies -- Sandweiss studied birth and medical records, old streetcar routes, maps of Brooklyn and letters King sent to his wife.

In the classroom, Sandweiss is teaching students how to conduct the same kind of original research with primary-source documents. In "Writing From the Document: Reconstructing the American Past," a seminar for juniors who are history majors, she immerses students in photographs, documents and old maps from Firestone Library's archives. The class meets in the library's special collections section, where students use the map, graphic arts, manuscript and rare books collections.

"The class has exposed me to an approach to history that I don't think I could've learned in any other class," said Snow Li. "Professor Sandweiss challenges us to think critically about our sources, especially primary sources, and has taught us never to assume that what we read and what we see is the truth. She also has taught us how to analyze sources other than writing, such as photos, engravings, maps and manuscript letters, things I would never have thought to include in my research otherwise."

Elizabeth Parsons signed up for the class because she was eager to learn more about primary-source research. She has gotten "the opportunity to see the wealth of resources that Princeton has," she said. "Without a class like this, I could have easily gone through four years at Princeton never knowing about the truly priceless resources that Princeton has collected and acquired over the years. The class has enabled me to understand the ways in which history is so much more than what is covered in textbooks."

Sandweiss joined the Princeton faculty from Amherst College, where she had taught since 1989. Previously, she was director of the Mead Art Museum at Amherst and the curator of photographs at the Amon Carter Museum in Fort Worth, Texas. A graduate of Harvard University, she received her Ph.D. from Yale University.

Sandweiss' research and teaching focus on 19th-century U.S. history. Her 2002 book "Print the Legend: Photography and the American West" won the Ray Allen Billington Prize from the Organization of American Historians for the best book in American frontier history.

"Sandweiss' courses will fill an enormous gap in the history department's curriculum and, given her enthusiasm and command of her subject, will stimulate high levels of interest in the student body," said William Jordan, the chair of the history department and the Dayton-Stockton Professor of History. "She also has brought the department into collaboration with the Newberry Library in Chicago to further strengthen the resources that faculty and graduate students can call upon in their work, including in the history of Native Americans." 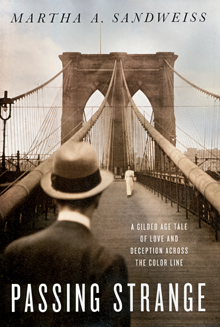 The New York Times' book critic Janet Maslin named "Passing Strange" one of the top 10 books of the year, calling it "a fine, mesmerizing account of how one extremely secretive man … could encapsulate his country's shifting ideas about race." The film rights to the book have been optioned by HBO.

Born in 1842, Clarence King was raised in Newport by parents of old American stock and was educated at Yale University. He became famous in his 20s as the leader of the U.S. Geological Exploration of the Fortieth Parallel, which mapped the West. Later he was the first director of the U.S. Geological Survey, a close friend of historian Henry Adams and a much-admired dinner guest at society parties in New York.

At the age of 46, King married Ada Copeland, who was then working in New York as a children's nursemaid, in a religious ceremony at her aunt's house. (Since there was no civil ceremony, it is considered a common-law marriage.) Ada, 19 years his junior, lived with their children in Brooklyn and later Queens, attributing her husband's long absences to his job as a Pullman porter, a position held exclusively by black men. King kept his secret well hidden. Sandweiss never found a photo of the couple together or any photos of King with his children.

King's ability to conceal a black wife and children who lived in the same city was only possible because of New York's unique attributes, Sandweiss said.

"New York had segregated neighborhoods and excellent public transportation," she pointed out. King lived as a bachelor in all-white gentleman's clubs in Manhattan, and hopped on the streetcar when he wanted to visit his family in another borough.

But the most amazing part of King's story is that someone with fair hair and blue eyes was accepted as a black man. He managed it, Sandweiss said, because of the so-called "one-drop" laws passed in the South during Reconstruction, which declared that someone with one black great-grandparent was considered legally black.

"The laws were meant to make it very difficult to move from one racial category to the other," Sandweiss said. "Ironically, they made it very possible to do that, because you could claim an ancestry -- or more often hide an ancestry -- that was invisible in the color of your skin." 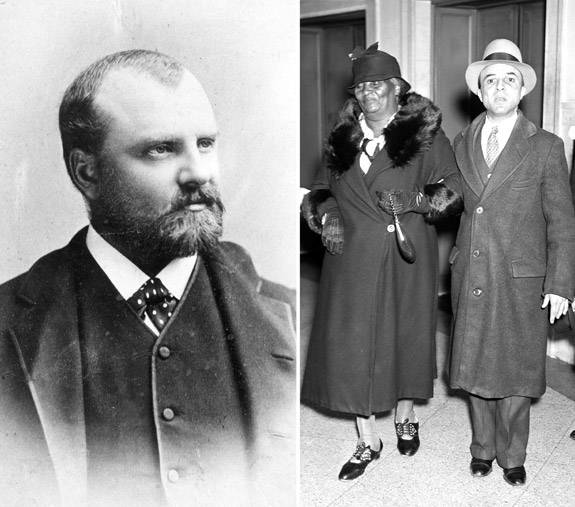 King finally confessed to his wife and family by letter in 1901 from Arizona, where he died of tuberculosis. Ada, who died in 1964 at the age of 103, was one of the last living former slaves in the United States.

Sandweiss' research led her to a living relative of Ada's who had known her well -- her great-granddaughter, Patricia Chacon, who shared memories and photos of Ada.

Anxiety about race continued to play a significant role in the lives of the couple's descendants. Their two daughters married as white, each vouching for the other's racial identity at city hall, "which meant they had to leave their mother at home, because she was dark-complected," Sandweiss said. Their granddaughter, Thelma, whom Ada raised, married a white man who, according to Sandweiss' book, "hinted that her mixed racial heritage should remain a secret. ... Anxious about what her own children might look like, Thelma adopted two white infants in the 1950s."

"The vexing problem of race stalked this family for many years," Sandweiss said.