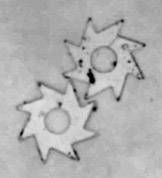 A scientist from Princeton University, working with researchers from the U.S. Department of Energy's (DOE) Argonne National Laboratory and Northwestern University, has discovered that common bacteria can turn microgears when suspended in a solution, providing insights for design of bio-inspired dynamically adaptive materials for energy.

"On the fundamental level, our work demonstrates that mechanical energy can be extracted from
the random motion of self-propelled particles under certain conditions," said Andrey Sokolov, a postdoctoral research associate in Princeton's Department of Ecology and Evolutionary Biology.

A paper on this research was published in the Dec. 14 Proceedings of the National Academy of Sciences.

The microgears with slanted spokes were placed in the solution along with the common aerobic bacteria, Bacillus subtilis. Sokolov, along with Igor Aronson from Argonne and Bartosz Grzybowski and Mario Apodaca from Northwestern, discovered that the bacteria appear to swim around the solution randomly, but occasionally the organisms will collide with the spokes of the gear and begin turning it in a definite direction. 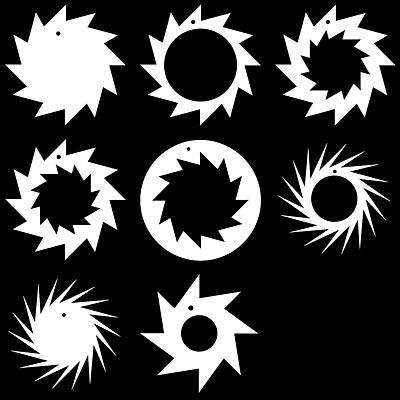 This image shows silhouettes of several gear designs that could be turned by Bacillus subtilis bacteria. (Image: Courtesy of Argonne National Laboratory)

"The gears are a million times more massive than the bacteria," said Aronson, who was the principal investigator. "The ability to harness and control the power of bacterial motions is an important requirement for further development of hybrid biomechanical systems driven by microorganisms."

A few hundred bacteria work together in order to turn the gear. When multiple gears are placed in the solution with the spokes connected like in a clock, the bacteria will begin turning both gears in opposite directions and it will cause the gears to rotate in synchrony for a long time.

"The power produced by each gear of a diameter of about 400 microns and thickness of 50 microns is of the order of a femtowatt -- too small to power any macroscopic machine," Sokolov said. "But we believe that this technique will be useful for micromanipulation of submillimeter objects or operating the movable parts of microfluidic devices."

Aronson added, "Our discovery demonstrates how microscopic swimming agents, such as bacteria or man-made nanorobots, in combination with hard materials can constitute a 'smart material' which can dynamically alter its microstructures, repair damage or power microdevices."

The speed at which the gears turn can also be controlled through the manipulation of oxygen in the suspended liquid. The bacteria need oxygen in order to swim and, by decreasing the amount of oxygen available, they will begin to slow down. By eliminating the oxygen, the bacteria go into a type of "sleep" and stop moving. Once the oxygen is reintroduced into the system, the bacteria "wake up" and begin swimming once again.