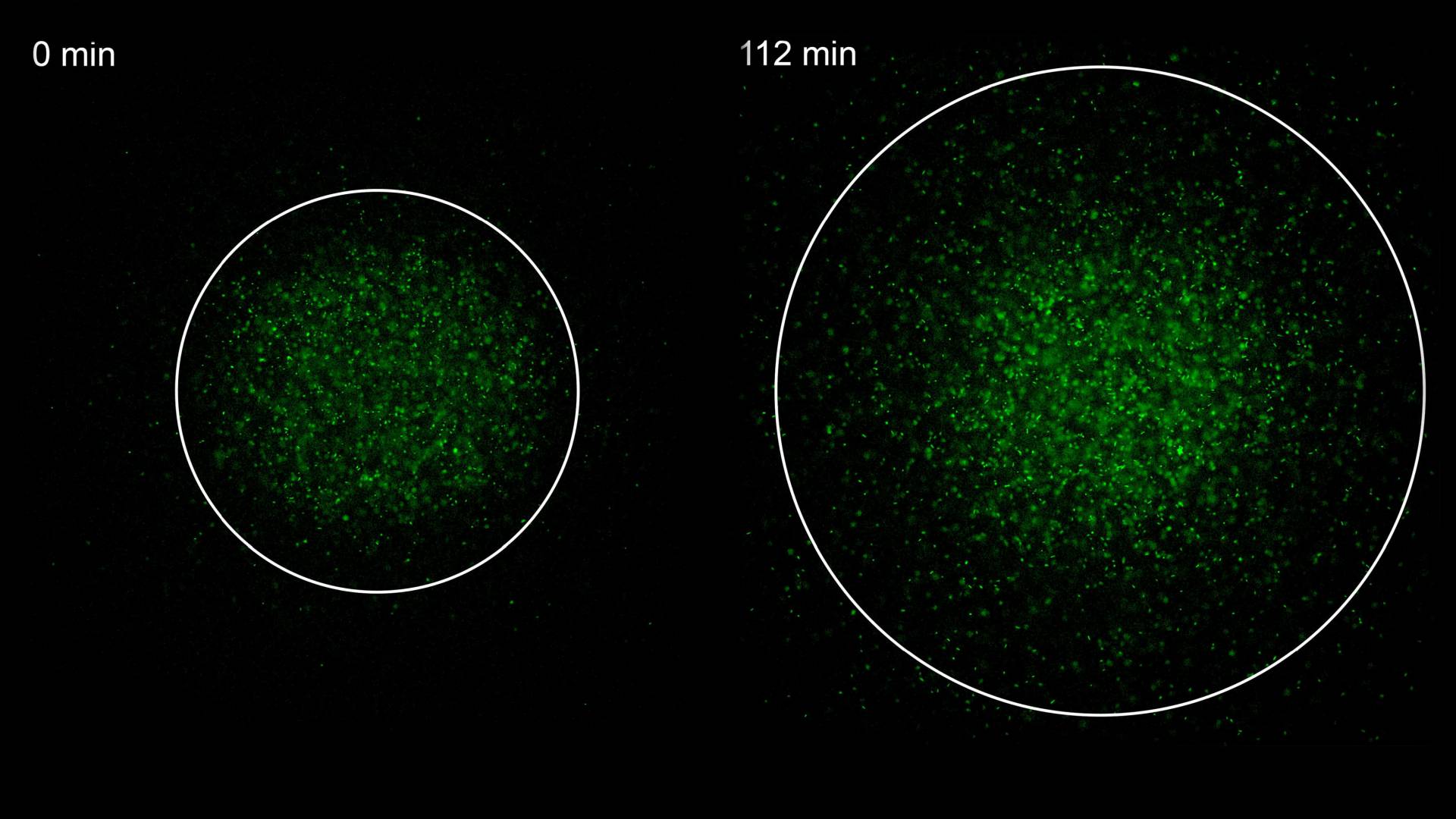 Researchers at Princeton photographed a population of the bacteria E. coli over time as they diffused through a simulated natural environment. The first-of-its-kind study overturned old assumptions about bacterial movement and led to a new predictive model that is 10 times more accurate than previous efforts.

Bacteria get a bum rap. Long cast as deadly enemies, bacteria have emerged as allies in the fights against pollution and disease. But harnessing that potential will require a strategy to control their behavior.

Engineered bacteria can help clean up polluted aquifers, where they move through porous rocks and wet sediments to target and break down contaminants. Likewise, medical therapies use bacteria to detect illnesses like diabetes or cancer by moving through the soft gels and tissues of the body and alerting physicians to the presence of sugars or mutated cells. But for researchers to use these interventions, they must be able to predict and control the movement of the bacteria in complex environments.

"By better predicting how bacteria move, we can better understand, for example, how pollutant-degrading bacteria spread in a groundwater aquifer,” said Sujit Datta, the study’s lead author and an assistant professor of chemical and biological engineering at Princeton. "This could enable the design of more effective bioremediation efforts to target distributed contaminant sources underground."

Previous research assumed all bacteria spread in a run-and-tumble manner — zooming straight, tumbling randomly, then running again in another direction. That assumption came from a long history of observing bacteria in simple liquid solutions, where movement is relatively unconstrained. But sediments and biological gels are much more complex habitats.

By studying E. coli bacteria in realistic conditions, Princeton researchers have now found these microbes actually use short hops to move through the solid-fluid mixtures typical of the real world. When they encounter a group of particles or other obstacles, the bacteria are squeezed together and flail around to get loose. Once loose, they hop until they reach the next obstacle and repeat the process. 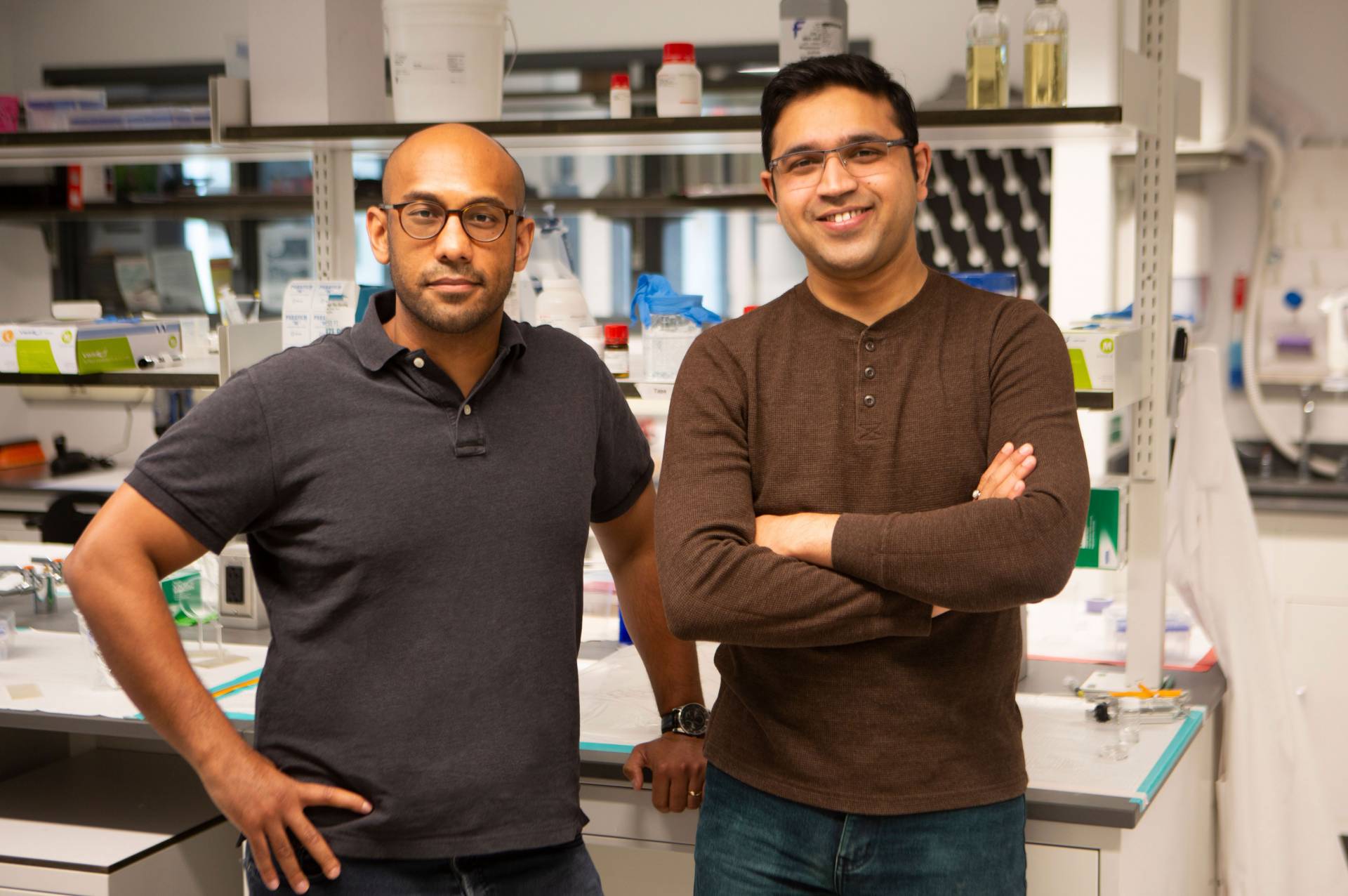 Sujit Datta (left), an assistant professor of chemical and biological engineering, and Tapomoy Bhattacharjee (right), a distinguished postdoctoral fellow in the Andlinger Center for Energy and the Environment, created a transparent sediment that closely mimics conditions where the bacteria E. coli thrive, then looked at how the individual cells moved through this complex geometry. The results were published on May 6 in the journal Nature Communications.

The study's results, published May 6 in Nature Communications, led to a new behavioral model that is 10 times more accurate than previous efforts.

“There’s been this puzzle: Why is the typical model wrong?” Datta said. The difference was in the mathematics used to describe the material through which the bacteria move. “The bottom line here is that geometry matters.”

The difference has masked important details.

Biological gels, such as mucus in the body, share basic structural qualities with sediments typical of underground water sources as well as oil reservoirs, where bacteria could be used to reduce the impact of extraction. Gels and sediments are characterized by an intricate mixture of solids and fluids that scientists call disordered porous media. The solid particles form a mesh through which liquid and gas flow, creating a complex and tortuous space that is difficult to describe with mathematics. The mixture contains uneven concentrations of material that can impede bacteria’s movement and squeeze them together.

Datta used a deep understanding of the physics of these strange spaces to gain insight into the life that inhabits them.

"People have been studying bacteria for more than 300 years,” Datta said. “The vast majority of those studies are in liquid cultures, or on plates, or in microfluidic channels, but in reality, most bacteria live in porous media."

The problem for scientists was that most porous media are opaque, making close observation of bacteria within them all but impossible. Part of the research in Datta's lab involves making transparent rocks to study fluid dynamics within them. But most of those experiments use solutions that would kill bacteria. When Tapomoy Bhattacharjee joined Datta's team as a distinguished postdoctoral fellow with the Andlinger Center for Energy and the Environment, he brought experience working with a promising material.

By manufacturing a clear gel made mostly with water and simulating the complex geometry of an E. coli habitat, the researchers were able to observe the minute details of how these microbes spread in a more natural setting. Each bacterium was labeled with a fluorescent tag and photographed with a high-powered microscope as it moved through the gel. The images revealed a major flaw in the old model and allowed the researchers to construct a new model with far greater predictive power.

The researchers believe their new model, and the insights that it spawns, will bring technological innovations in health care, energy production and environmental remediation closer to reality.

"Now that we are starting to understand how bacteria move in porous media, we can start to control this behavior," said Bhattacharjee, who is particularly enthusiastic about possible environmental applications. "The goal is to inject bacteria into a contaminated aquifer and have them move through the pores towards contaminants, which they can degrade."

The team has now begun to look at how movement through similar conditions changes in large colonies of bacteria, where group dynamics tend to influence behavior.

Support for the work was provided in part by the Project X Innovation Fund and the Andlinger Center for Energy and the Environment.