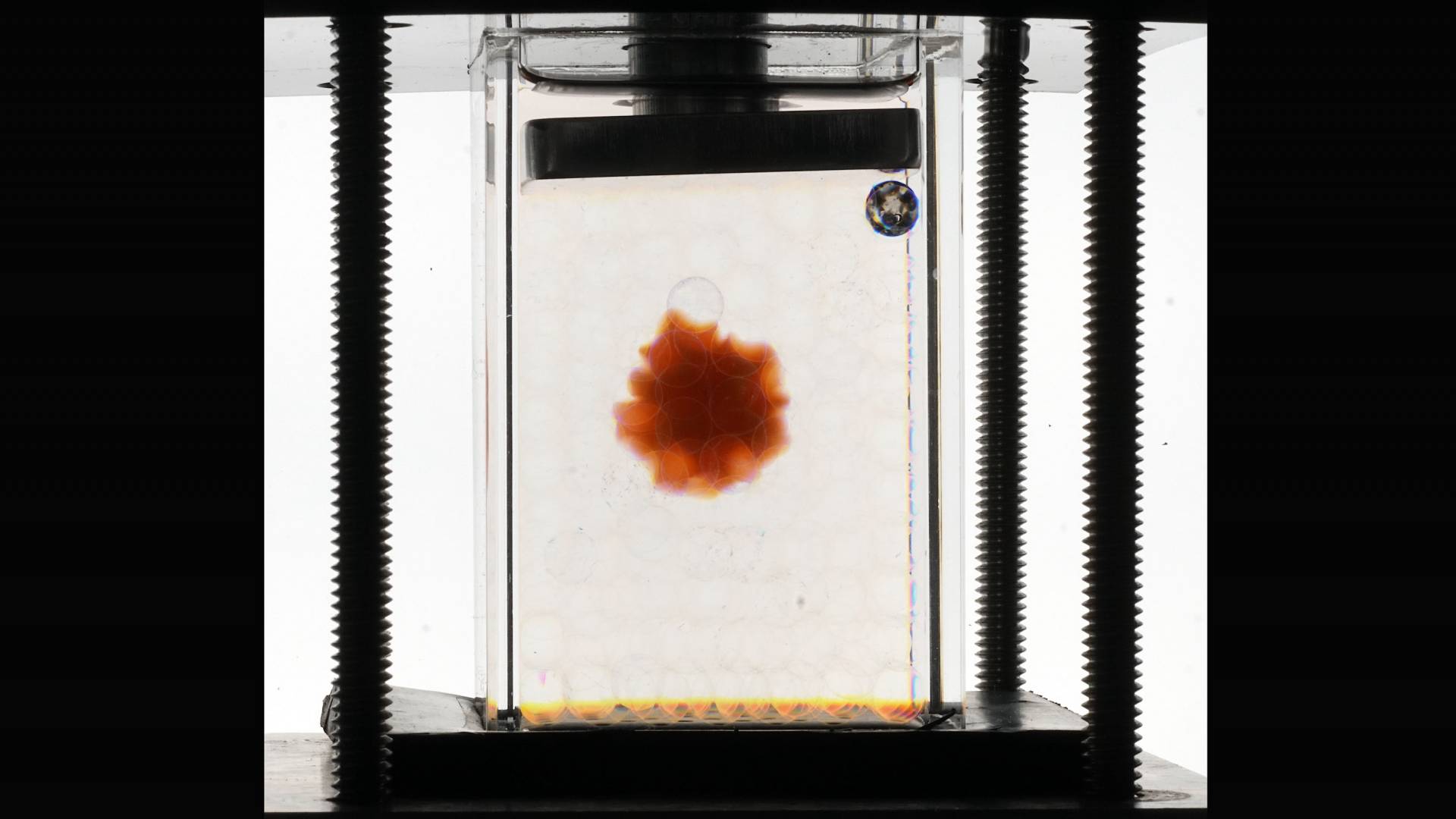 Princeton researchers used tiny glass beads as a substitute for soil, so they could observe the behavior of hydrogels — tiny plastic blobs that can absorb a thousand times their weight in water — whose success in agriculture has been puzzlingly uneven. The researchers used a chemical that compensated for the distortion caused by the round beads, resulting in a perfectly clear view of the hydrogel.

In research that may eventually help crops survive drought, scientists at Princeton University have uncovered a key reason that mixing material called hydrogels with soil has sometimes proven disappointing for farmers.

Yet mixing hydrogels into farmers’ fields has had spotty results. Scientists have struggled to explain these uneven performances in large part because soil — being opaque — has thwarted attempts at observing, analyzing and ultimately improving hydrogel behaviors.

In a new study, Princeton researchers demonstrated an experimental platform that allows scientists to study the hydrogels’ hidden workings in soil — or other compressed, confined environments. The platform relies on two ingredients: a transparent granular medium — in this case, glass beads — as a soil stand-in, and water doped with a chemical called ammonium thiocyanate. The chemical cleverly changes the way the water bends light, offsetting the distorting effects the round glass beads would ordinarily have. The upshot is that researchers can see straight through to a colored hydrogel glob amidst the faux soil.

“A specialty of my lab is finding the right chemical in the right concentrations to change the optical properties of fluids,” said Sujit Datta, an assistant professor of chemical and biological engineering at Princeton and senior author of the study published in the journal Science Advances on Feb. 12. “This capability enables 3D visualization of fluid flows and other processes that occur within normally inaccessible, opaque media, such as soil and rocks.”

The scientists used the setup to demonstrate that the amount of water stored by hydrogels is controlled by a balance between the force applied as the hydrogel swells with water and the confining force of the surrounding soil. As a result, softer hydrogels absorb large quantities of water when mixed into surface layers of soil, but they don’t work as well in deep soil, where they experience more pressure. One possible solution: hydrogels with more internal crosslinks, which as a result are stiffer and can exert a larger force on the soil as they absorb water, would be more effective in deeper layers. Guided by these results, engineers will now be able to conduct further experiments to tailor the chemistry of hydrogels for specific crops and soil conditions, Datta said.

“Our results provide guidelines for designing hydrogels that can optimally absorb water depending on the soil they are meant to be used in, potentially helping to address growing demands for food and water,” said Datta. 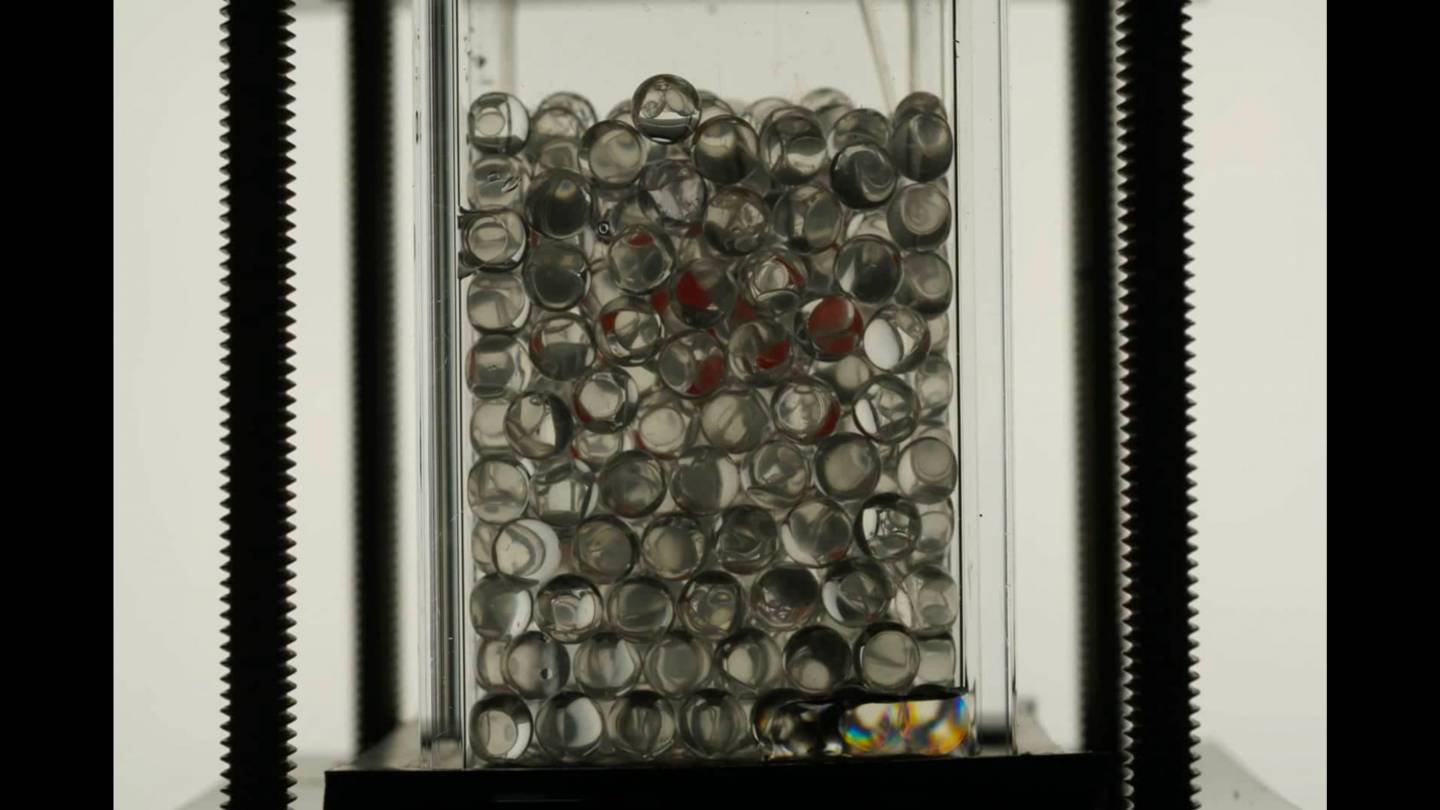 When the researchers added a mixture of water and ammonium thiocyanate to the container with tiny glass beads, it eliminated the distortion caused by the round beads, allowing for a clear view of the hydrogel.

The inspiration for the study came from Datta learning about the immense promise of hydrogels in agriculture but also their failure to meet it in some cases. Seeking to develop a platform to investigate hydrogel behavior in soils, Datta and his colleagues started with a faux soil of borosilicate glass beads, commonly used in bioscience investigations (and costume jewelry). The bead sizes ranged from one to three millimeters in diameter, consistent with the grain sizes of loose, unpacked soil.

In summer 2018, Datta assigned Margaret O’Connell, then a rising Princeton senior working in his lab through the ReMatch+ program, to identify additives that would change water’s refractive index to offset the beads’ light distortion, yet still allow a hydrogel to effectively absorb water. O’Connell lit upon an aqueous solution with a bit over half of its weight contributed by ammonium thiocyanate.

Nancy Lu, a graduate student at Princeton, and Jeremy Cho, then a postdoc in Datta’s lab and now an assistant professor at the University of Nevada-Las Vegas, built a preliminary version of the experimental platform. They placed a colored hydrogel sphere, made from a conventional hydrogel material called polyacrylamide, amidst the beads and began making observations.

Jean-François Louf, a postdoctoral research associate in Datta’s lab, then constructed a second, honed version of the platform and performed the experiments whose results were reported in the study. This final platform included a weighted piston to generate pressure on top of the beads, to simulate the range of pressures a hydrogel would encounter in soil, depending how deep the hydrogel is implanted.

Overall, the results showed the interplay between hydrogels and soils. The theoretical framework the team developed will help explain the confounding field results gathered by other researchers, where sometimes crop yields improved but other times hydrogels showed minimal benefits or even degraded the soil’s natural compaction and increased the risk of erosion.

“This work opens up tantalizing opportunities for the use of hydrogels as soil capacitors that modulate water availability and control water release to crop roots, in a way that could provide a true technological advance in sustainable agriculture,” said Ruben Juanes, a professor of civil and environmental engineering at the Massachusetts Institute of Technology who was not involved in the study.

Other applications of hydrogels that also stand to gain from Datta and his colleagues’ work include oil recovery, filtration, and the development of new kinds of building materials like concrete infused with hydrogels to prevent excessive drying out and cracking. One particularly promising area is biomedicine, with applications ranging from drug delivery to wound healing and artificial tissue engineering.

“Hydrogels are a really cool, versatile material that also happen to be fun to work with,” said Datta. “But while most lab studies focus on them in unconfined settings, many applications involve their use in tight and confined spaces. We’re very excited about this simple experimental platform because it is allowing us to see what other people couldn’t see before.”

“Under pressure: Hydrogel swelling in a granular medium,” by Jean-François Louf, Nancy B. Lu, Margaret G. O’Connell of the Class of 2019, H. Jeremy Cho and Sujit S. Datta, was published Feb. 12 in the journal Science Advances (DOI: 10.1126/sciadv.abd2711). The work was supported in part by the National Science Foundation and the High Meadows Environmental Institute at Princeton University.