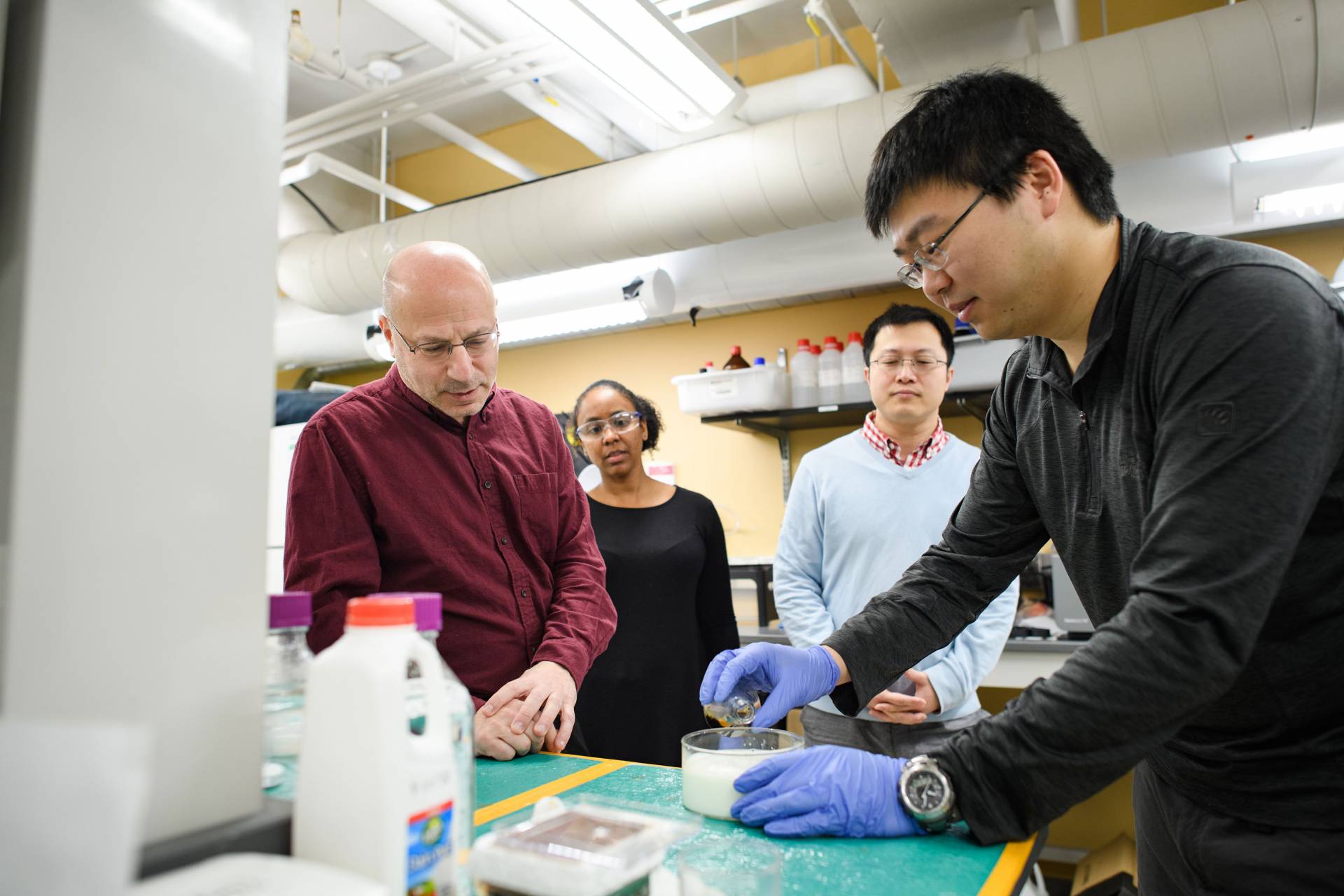 For anyone who has marveled at the richly colored layers in a café latte, you’re not alone. Princeton researchers, likewise intrigued, have now revealed how this tiered structure develops when espresso is poured into hot milk.

“The structure formation in a latte is surprising because it evolves from the chaotic, initial pouring and mixing of fluids into a very organized, distinct arrangement of layers,” said Nan Xue, lead author of a Dec. 12 paper describing the findings in Nature Communications, and a graduate student in the lab of Howard Stone, the Donald R. Dixon ’69 and Elizabeth W. Dixon Professor of Mechanical and Aerospace Engineering at Princeton.

Honing techniques for yielding sought-after layers by flowing liquids into each other could reduce costs and complexity in a range of applications.

“From a manufacturing perspective, a single pouring process is much simpler than the traditional sequential stacking of layers in a stratified product,” said Stone. “In one application of this study, we are exploring the physics behind making a whole layered structure with one step, rather than one-by-one stacking of the layers.”

The inspiration for the research project came from an unsolicited, emailed picture of a layered coffee drink sent to Stone. With Xue looking for a project to take on as he started his graduate work, he initially investigated the concept by preparing lattes in the lab, using store-bought coffee and milk.

After several tries, it became clear to Xue that staying within only certain parameters, such as temperatures and pour rates, allowed for a characteristic café latte. These efforts hinted at the underlying, quantifiable physics that had to be involved in its liquid structure formation.

To more precisely control their model of latte layering, Xue and colleagues opted for a stand-in recipe that would make a barista shudder: dyed water substituting for the hot coffee, and salty, denser water for the warm milk.

A panel of light-emitting diodes and a camera then illuminated and captured the movement of fluids within the concoction. The researchers seeded the mixture with tracer particles, which scattered light from a green laser beam, to further track the faux-latte’s internal dynamics, a technique called particle image velocimetry. Finally, numerical simulations were run to compare the collected data with various models of the evolving system of intermixing liquids.

The overall analysis showed that the primary mechanism behind the layering is a phenomenon known as double-diffusive convection. It occurs when stacked-up fluids of different densities, impelled by gravity to mix their contents, exchange heat through the movement of their constituent materials. Within a given mixture, denser, cooler liquids sink, while lighter, hotter liquids rise. This sinking and rising stops, however, when the local density in a region within a latte approaches an equilibrium. As a result, the fluid there has to flow horizontally, rather than vertically, creating distinct bands, or layers.

Through their experiments, the researchers examined how the velocity of the fluid injection of the warm milk matters as well. If poured too slowly, the denser fluid will mix too evenly as it flows into the less-dense fluid. A faster pour rate causes the former to punch through the latter and trigger the rapid movements that culminate in the desired layering when density equilibria are established.

Additional work needs to be done to characterize the layering effect demonstrated in lattes to extend control of it to other leveled liquids and semi-solids. But the preliminary findings from Xue and his colleagues already have shown how the activity within a common beverage could lead to uncommon insights.

“This result shows the beauty of fluid mechanics and is very significant,” said Detlef Lohse, a professor of fluid mechanics at the University of Twente in the Netherlands who was not involved with the study. “I think it will have bearing on various industrial flows and mixing procedures in so-called process technology, in which mixing of fluids with different densities by the injection of one into the other is omnipresent.”

Lohse further pointed out how the Princeton research could help in better explaining heat- and salinity-dependent flows of water in Earth’s vast oceans, a phenomenon that has key implications in climatology and ecology. “The most awesome finding may be that there is perfect analogy between the layering in a café latte,” said Lohse, “and the known and extremely relevant layering of water with different temperatures and salt concentrations in the ocean.”

Additional authors on the paper include Sepideh Khodaparast, Lailai Zhu, Janine Nunes and Hyoungsoo Kim, all part of Stone’s lab at Princeton. Zhu is also affiliated with the Linné Flow Centre and the Swedish e-Science Research Centre at the KTH Royal Institute of Technology in Stockholm. Kim is also affiliated with the Department of Mechanical Engineering at the Korea Advanced Institute of Science and Technology in Deajeon, South Korea. The work was supported by the National Science Foundation, the Swiss National Science Foundation and the Swedish Research Council.