Designing a course, crafting a business

Since childhood, junior Jason Baum has been aware of environmental issues, switching off lights when leaving a room and turning off the water while brushing his teeth.

"The first day, I just couldn't believe it as I looked around the room. We got right into gear that day, and we're making serious progress," said Baum, an economics major pursuing a certificate in environmental studies. "It's something I greatly value and appreciate about Princeton. If you want to learn about something and have substance behind it, you can make it happen."

Professor David Wilcove, director of the environmental studies program, said the program's faculty and staff members enjoy helping students who are willing to do the legwork to find a professor and a critical mass of students for the course.

"A growing number of Princeton students are deeply interested in environmental issues and, much to my delight, they do not hesitate to come forward with interesting suggestions for courses," said Wilcove, who has joint appointments in the Department of Ecology and Evolutionary Biology and the Woodrow Wilson School of Public and International Affairs. "If the students are that eager to learn about a subject, we try to be as supportive as possible."

Working with van der Vink, Baum was responsible for creating a syllabus and sample reading list that matched the academic rigor of a 300-level course. During that process, Baum researched graduate-level business courses at other academic institutions. The existence of numerous business plan competitions on and off campus also motivated Baum, so the focus of the class is that each student must develop a professional, ready-to-pitch business plan as his or her final project. 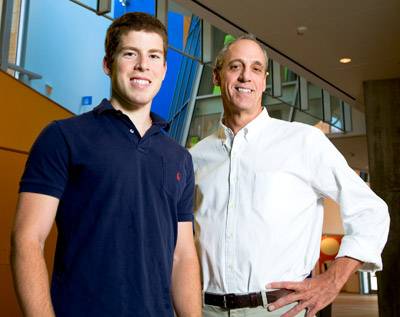 Baum, who also is president of the student group Princeton Environmental Action, wanted the class to offer "not just an exam that you turn in and forget about but a finished product that ... could be a business and make a difference in the world."

By coincidence, a group of Princeton alumni with a similar goal came forward. The class of 1976's Spirit of Service '76 group is raising $12,000 in award money for a campuswide "green" business plan competition in February, which van der Vink announced on the first day of class. The Spirit of Service '76, which also will offer mentoring by alumni later in the process, is coordinating the competition with the Keller Center for Innovation in Engineering Education, the Pace Center, the Princeton Environmental Institute and the student-led Princeton Entrepreneurship Club.

With that reward as an additional inspiration, van der Vink led his students through the intricacies of developing business plans that would attract investors. "My goal is to create 22 business plans that the class of 1976 and private investors will see as irresistible business opportunities," he said.

"We’re doing this in two steps. What are the guiding principles of an environmental company, and how does one actually launch and run a business?" he said.

Van der Vink, who heads an international environmental consulting and development company called Terrametrics LLC, had the students begin with three proposals. One of those proposals had to be an international project, reflecting his view that some of the greatest challenges are in fostering environmentally sustainable economic growth in the developing world.

"The expectation is that whatever business they develop, it must make a tangible contribution to environmental stewardship and provide measurable humanitarian benefits. It's supportive of the University's [informal] motto of 'in the nation's service and in the service of all nations,'" said van der Vink, who received his Ph.D. in geosciences from Princeton in 1983 and has been a visiting lecturer in that department since 1991.

He balanced that idealism with realism. The students' business plans had to show how they would make their business financially profitable and sustainable within three years. Students were required to describe how they would manage risk and other potential cultural and political barriers to their project. To give students some insight into the funding side of the equation, van der Vink invited several venture capitalists and international investment specialists to the class for question-and-answer sessions.

"There are many creative ideas [among the students]. Now the difficult part begins -- taking those ideas and turning them into realistic, financially viable projects," he said. "How do you access tribal lands in the Sahel? How do you hire, train and manage 200 people in Burkina Faso?"

The students, who were selected by application to the course, responded enthusiastically. The group included sophomores, juniors and seniors majoring in subjects from philosophy to politics and from math to history. Van der Vink drew on this diversity by encouraging group discussions and requiring that each student distribute his or her assignments to every other member of class each week -- a type of peer review.

"The work exponentially improves over the course of the semester because everyone takes the best ideas from the week before and advances them in their own way. The best paper each week becomes the bar above which all the other papers must begin the next week," he said.

In one session, van der Vink surprised his class with an impromptu competition, giving each student 90 seconds to pitch their businesses and allowing students to vote on the winning proposal.

In another session, each student gave a more detailed presentation of a potential project, such as a latex company in Liberia, an organic candy company, a car-sharing service in Brasilia and a construction materials disposal and recycling service. In the lively discussions that followed, other students offered comments on weaknesses and potential improvements. Along the way, van der Vink interjected with questions about the project's costs, revenue sources and competitors; he also offered insights and humorous anecdotes from his own experience on alternate business models and current trends in green building and green thinking.

"I've learned a lot of skills I can apply to a lot of places," said junior Julie Phillips, an ecology and evolutionary biology major pursuing a certificate in environmental studies. "We're all working toward applying to the fund being offered by the class of 1976, so it's pretty realistic. We're aiming for something that could really happen."

"We are essentially making our own curriculum, because our only assignments are to improve upon our business plans," she said. "I am getting a lot of great feedback from my classmates on how to improve it, but I am mostly looking forward to putting it into practice."

Baum has returned to his regular role as a student, researching ventures such as wetlands reclamation consulting and landfill gas reuse.

"It's interesting to see what I created and now to take a step back and just be a part of the group," he said. "I'm happy with that."

In designing robots, students learn to drive a project