'Paws'ing to celebrate the Year of the Tiger 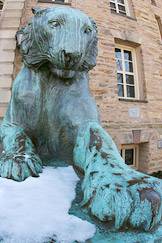 Each of the four corners of the Holder Hall tower features a brass tiger weather vane. (Photo: John Jameson)

This Sunday, Feb. 14, marks the start of the Year of the Tiger, according to the Chinese Zodiac. It is the first day of the lunar new year.

It seems that Princeton and the tiger were destined to be connected -- 1746, the year Princeton was founded, was also the Year of the Tiger.

The tiger emerged as a symbol of Princeton in the late 1800s. The appearance of the tiger as Princeton's totem has been ascribed by Princetonians of that period to two things: the use of orange and black as the college colors; and the locomotive cheer, which contains "tiger" as a rallying word: "Hip hip, rah rah rah, tiger tiger tiger, sis sis sis, boom boom boom, ah."

The Chinese Zodiac also cycles through elements of water, wood, fire, Earth and, this year, metal. There are many metal tigers to be found in the architecture around campus:

The tigers between Whig and Clio halls were created male and female in 1969 -- the year coeducation was introduced. They are shown here framing the back of Nassau Hall clock tower. (Photo: Brian Wilson)

• Princeton's class of 1879 donated the stately bronze tigers guarding the entrance of the University's landmark Nassau Hall, which was built in 1756. The tigers were installed in 1911. Visitors frequently can be found sitting on the sculptures to gain a tiger's eye view of the front campus and FitzRandolph Gate, the University's main entrance.

• The tower of Holder Hall, built in 1910, features brass tiger weather vanes on each of the tower's four corners. The tigers appear to be climbing up the poles.

• Many of the early tigers on campus were created presumably male. In 1969, the year coeducation was introduced, Bruce Moore's bronze tigers for the Adams Mall between Whig and Clio halls were created male and female. 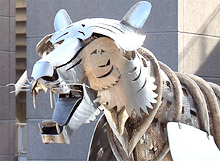 • In 2000, two 7,000-pound stainless steel tiger sculptures were installed at the north entrance of Princeton Stadium. A gift of William Weaver Jr., a 1934 Princeton graduate, the nine feet tall, 16 feet long beasts were made by sculptor Ruffin Hobbs.

Video: Year of the Tiger