A team of scientists from Princeton University and The Cancer Institute of New Jersey has embarked on a major new project to unravel the secret lives of cancer cells that go dormant and self-cannibalize to survive periods of stress. The work may help produce new cancer therapies to stem changes that render cancer cells dangerous and resistant to treatment.

"We want to know: What role is this self-cannibalization playing in the middle of a tumor?" said team member Hilary Coller, an assistant professor of molecular biology at Princeton. "To treat cancer, it may be that you want to get rid of this ability in tumor cells, so we're searching for inducers and inhibitors of this process." 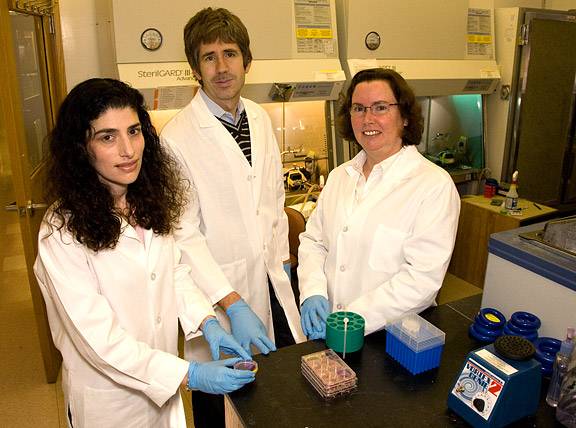 From left, Princeton scientists Hilary Coller and Joshua Rabinowitz, in collaboration with Eileen White of the Cancer Institute of New Jersey and Rutgers University, are using a variety of scientific techniques to explore how some cancer cells self-cannibalize and go dormant to tolerate extreme stress. Funded by a $1 million National Institutes of Health Challenge Grant through the American Reinvestment and Recovery Act, the project may lead to new treatment regimes that inhibit this ability and kill cancer cells while allowing normal cells to survive. (Photo: Denise Applewhite)Images for news media

Eileen White, associate director for basic science at CINJ, Coller and Princeton chemist Joshua Rabinowitz recently received a $1 million National Institutes of Health Challenge Grant through the American Reinvestment and Recovery Act to support the research effort, which is made possible by the longstanding partnership between Princeton and CINJ. The two institutions recently formalized their relationship when Princeton officially joined CINJ as a scientific collaborator to enhance current investigations and foster future work at the frontier of cancer research. CINJ is a Center of Excellence of the University of Medicine and Dentistry of New Jersey-Robert Wood Johnson Medical School and New Jersey's only National Cancer Institute-designated Comprehensive Cancer Center. 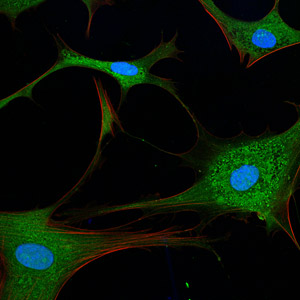 To determine whether specific genes play a role in autophagy in proliferating and quiescent cells, Coller's team reduces the activity of these genes and then determines the amount of autophagy within the cell. To assess autophagy levels in one previous experiment, Sarah Pfau, who earned her bachelor's degree from Princeton in 2008, exposed the cells to a fluorescently labeled antibody that recognizes a protein present on autophagosomes, the structures that cells form to perform autophagy. Areas within the cell where autophagy was taking place glowed green when observed under a fluorescent microscope. (Image: Sarah Pfau)

For more than 50 years, scientists have known that significant differences exist between the metabolic processes of normal and cancerous cells. These processes encompass the complex set of chemical reactions that control everything from converting food into usable energy to manufacturing cellular components for growth and reproduction. But the causes and consequences of these metabolic differences remain largely unknown -- and the possibilities for exploiting these differences as potential targets for new therapies have been largely untapped. The NIH project is designed to fund inquiry into these important questions.

The altered metabolism of cancer cells allows them to grow rapidly and proliferate, leading to the development of aggressive tumors often able to spread, or metastasize, to other areas of the body. But when subjected to stressful conditions, such as oxygen- and nutrient-deprivation in the center of a tumor or an onslaught of chemotherapeutic agents, these cells are able to stop proliferating and cannibalize portions of themselves, a process known as autophagy.

"This ingenious property allows these cancer cells to tolerate enormous amounts of stress," said White, who also is a professor of molecular biology and biochemistry at Rutgers University. "If they're starving or stressed, they eat themselves and hunker down until the stress is removed. Then, as soon as the stress is gone, they grow back, often killing the patient. If we can understand this process and exploit it for cancer therapy, we may develop new ways to kill the cancer cells without killing the normal cells."

Autophagy is believed to confer stress resistance to cells by providing energy and disposing of old or damaged cell parts that might otherwise prove harmful to the cell over time, and it is not unique to cancer cells: Coller studies a metabolic state known as cellular quiescence in fibroblast cells. Fibroblasts are found in connective tissue, which includes cartilage and the cellular matrix known as stroma that provides support to body structures, such as organs, glands and also tumors. Akin to dormant cancer cells, quiescent fibroblasts take a break from the normal cell growth cycle, but maintain the ability to re-enter the cycle in the future. Like dormant cancer cells, quiescent fibroblasts often engage in autophagy.

In this video, cancer cells with a genetic defect that prevents programmed cell death -- a biological tumor suppression mechanism -- are subjected to stressful conditions. Over the course of a week, the cells stop dividing and consume themselves through autophagy to survive the stress, ultimately becoming dormant. (Videos: Courtesy of Eileen White)

Cancer researchers now recognize that a full understanding of how a tumor behaves in response to stress requires knowledge about the metabolism of the cancerous cells and the stromal cells in the tumor, which often constitute a large percentage of the tumor itself, as well as an awareness of how the metabolism of cancerous and noncancerous cells affect one another. Supported by the NIH Challenge Grant, the interdisciplinary team is seeking to define the metabolic networks in stromal and tumor cells, identify the metabolic adaptations that take place as cells transition between different metabolic states, and demonstrate how these changes alter tumor-stromal interaction. The team also is supported by grants from CINJ and the New Jersey Commission on Cancer Research.

The research effort makes use of wide-ranging scientific techniques, including DNA microarray analyses to identify the gene expression changes that underlie metabolic alterations and state-of-the-art methods to identify altered metabolic states by quantifying the concentrations of metabolites -- compounds generated during biological processes that provide chemical clues into which metabolic processes are taking place -- and watching how they change over time.

To do this, the team relies on Rabinowitz's expertise in the use of mass spectrometry to observe the flows, or fluxes, of metabolites that have been labeled with stable isotopic tracers -- nuclei which, like radioactive tracers, have extra neutrons. These tracers are not radioactive, however; instead, they are detected solely based on their different masses.

When dormant tumor cells are returned to normal conditions, they grow back to their normal size and resume cell division within 24 hours. The videos, taken together, illustrate why it can be difficult to eliminate cancers that have the capacity to tolerate extended periods of stress and then grow back rapidly.

"If you only take a snapshot of which metabolites are present at any given time, you can miss the bigger picture of what is taking place, especially because many metabolites turn over every few seconds," said Rabinowitz, an associate professor of chemistry and genomics. "Adding isotope-labeled nutrient is the equivalent of determining how fast a stream is moving by adding red food coloring at a given point upstream and seeing how long it takes for the food coloring to make its way downstream."

The project complements clinical trials investigating ways to modulate autophagy in cancer cells, some of which are already under way at CINJ. One study is assessing whether adding hydroxycholoroquine, an anti-malaria drug known to have autophagy-blocking activity, to standard therapy for recurrent colon cancer will increase the number of cancers that go into remission or boost the length of remission.

"The ultimate test will be to take all of our findings and use that information to develop novel approaches for eradicating cancer," White said. "If we can prevent tumor cells from utilizing this altered metabolic state then that should be the Achilles' heel of tumors."

The cutting-edge research effort demonstrates the merits of the collaboration between Princeton and CINJ, which developed through a natural progression driven by science. 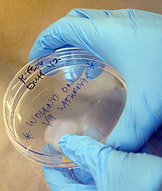 Coller and graduate student Erin Haley are exploring the functional consequences of self-cannibalization, or autophagy, in fibroblast cells. In one experiment, they are testing whether cells that are unable to engage in autophagy are defective in their wound-healing abilities. (Photo: Denise Applewhite)

"By uniting Princeton's expertise in systems biology, genomics and metabolism with CINJ's top-rate cancer molecular biology and clinical expertise, these collaborations provide opportunities for interaction that promises what the National Cancer Institute has been encouraging – translational research that harnesses basic discoveries for the prevention and treatment of cancer," said James Broach, a Princeton professor of molecular biology who directs the partnership in collaboration with CINJ Deputy Director Edmund Lattime.

"For years our world-class scientists at both facilities have been collaborating on individual cancer research projects," Lattime said. "By entering into a formal partnership, we are strengthening our team science approach so that we can collectively advance cancer research in New Jersey. This will enhance the development of the most innovative, cutting edge cancer treatments for patients in New Jersey and beyond. "

The partnership has already generated groundbreaking results: Last year, a group of Princeton and CINJ researchers led by Princeton molecular biologist Yibin Kang identified a gene, known as Metadherin or MTDH, which is responsible for metastasis and treatment resistance in some 30 to 40 percent of breast cancer patients. The work constituted a breakthrough in the understanding of the disease, laying the groundwork for the development of new treatments, and also established research methods that could be used to identify genes responsible for the metastasis of other types of cancer.