A surprising level of activity discovered in "sleepy" cells throughout the human body could be a key to good health.

Fibroblasts, which are found in connective tissue such as ligaments and tendons, long have been viewed by scientists as crucial but dull, quietly performing their essential function of providing the structural framework for tissue.

But now, after years of research, a team of Princeton University scientists has discovered that while these unassuming cells are in "sleep" mode, they actually are working much harder than previously thought to fend off destructive chemicals. The findings of a new study suggest that other cells may be similarly misunderstood and more important to the human body's longevity than scientists have realized.

Fibroblasts are integral to the body's immune response and for healing wounds. The study revealed that when fibroblasts go to sleep, entering a phase researchers term "quiescence," they are more lively than sluggish.

"We've realized that these sleepy cells are not sleepy at all," said Hilary Coller, an assistant professor of molecular biology and an author of the paper appearing in the Oct. 19 issue of the journal PLoS Biology.

"The broader implications could be that other cell types may also be metabolically active during quiescence as well," Coller said, noting there could be a whole host of cell types that are more important to their environment than is currently understood. 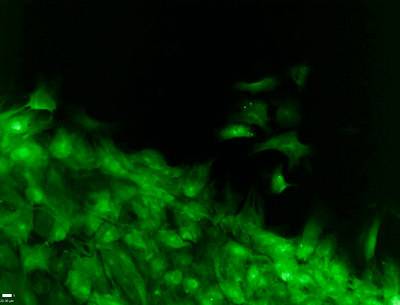 Fibroblast cells are integral to the body's immune response and for healing wounds. A new Princeton University study reveals that when fibroblasts go to sleep, entering a phase researchers term "quiescence," they are more active than previously thought. Here they are shown, via an image produced by an inverted fluorescence microscope, streaming toward a wounded skin cell. (Image courtesy of Erin Haley)

Cells are considered quiescent when they are not actively proliferating -- neither producing DNA nor dividing to produce offspring. But while they may not be propagating, quiescent fibroblast cells produce proteins that help replenish other cells lost to damage or age. On the other hand, if cells fail to become quiescent when they should, tumors can be produced.

In addition, the team discovered that quiescent fibroblasts self-destruct when they are prevented from undergoing a series of chemical reactions, which could suggest a possible strategy for decimating dormant tumor cells, Coller said.

Previous studies had shown that other kinds of quiescent cells, such as disease-fighting white blood cells or lymphocytes, eat less when they enter this phase.

However, the fibroblasts studied by the team -- collected from skin and connective tissue and grown laboriously in the laboratory -- are high-energy, charged-up beings, even when quiescent. And they eat and excrete plenty -- they chop up and reformulate proteins and fatty acids, hurling them into the extracellular matrix, the biological glue that holds cells into tissues. They also rely on a series of chemical reactions that to help eliminate damage-inflicting atoms known as free radicals.

"Our quiescent fibroblasts seem to be very different from quiescent lymphocytes," Coller said. "They have important functions for the body even when they are not actively proliferating. They have the key ability to secrete proteins into extracellular environments, the space between cells that must contain important components in order to give the body structure and function."

Johanna Lemons, a graduate student in the Department of Chemistry and the first author on the paper, conducted her research by dividing her efforts between Coller's laboratory, where she harvested the cells using classic tissue culture techniques, and that of Joshua Rabinowitz, another author on the paper who is an associate professor of chemistry and the Lewis-Sigler Institute for Integrative Genomics at Princeton.

In Rabinowitz's lab, Lemons and others employed the painstaking technique of metabolomics. Using this approach, the scientists analyzed metabolic processes by simultaneously measuring the levels of more than 65 core metabolites that made up the organisms' "metabolic network." A metabolite is a chemical involved in metabolism, the process by which an organism takes nutrients from the environment and converts them to energy and the molecular building blocks that cells use to grow. Amino acids, sugars, nucleotides and vitamins are all metabolites.

To conduct the study, the team used a mass spectrometry-based method developed by Rabinowitz. Mass spectrometry is a highly sensitive technique that identifies chemicals based on their size and electrical charge. The researchers tracked how the concentrations of metabolites in fibroblasts changed over time.

The team discovered that quiescent fibroblasts underwent a particular transformative cascade of chemical reactions that had only been thought to be used by actively dividing cells. When the scientists shut down this path in quiescent fibroblasts, the cells self-destructed in a process known as apoptosis.

The results could suggest ways to attack tumors, the scientists said. After all, some of the cells within a tumor can enter a state in which they are not dividing. They can remain dormant for years and without warning start dividing. Such cells are particularly difficult to target with current cancer treatments, which hunt down dividing cells for destruction.

By shutting down the same path as that followed by the quiescent fibroblasts, Coller said, they may be able to kill nondividing cancer cells. "This represents an important avenue for further investigation," she said.

In addition to Coller, Rabinowitz and Lemons, other authors on the paper are: Herschel Rabitz, the Charles Phelps Smyth '16 *17 Professor of Chemistry, and Xiao-Jiang Feng, an associate research scholar in the Department of Chemistry; Bryson Bennett, a postdoctoral research associate in the Lewis-Sigler Institute; Aster Legesse-Miller, an associate research scholar, Elizabeth Johnson, a graduate student, and Irene Raitman, a research specialist, all in the Department of Molecular Biology; and Elizabeth Pollina, a 2007 Princeton graduate now at Stanford University.