Considering how hard the human heart works, it’s not surprising that it needs a continuous supply of fuel to run efficiently over the human lifespan. What is surprising, however, is its fuel preference and the rate at which it consumes these fuels.

The Department of Chemistry’s Joshua Rabinowitz, collaborating with colleagues at the University of Pennsylvania Perelman School of Medicine, completed the first comprehensive, quantitative mapping of human cardiac fuel use, reporting that the heart preferentially and voraciously consumes fatty acids. 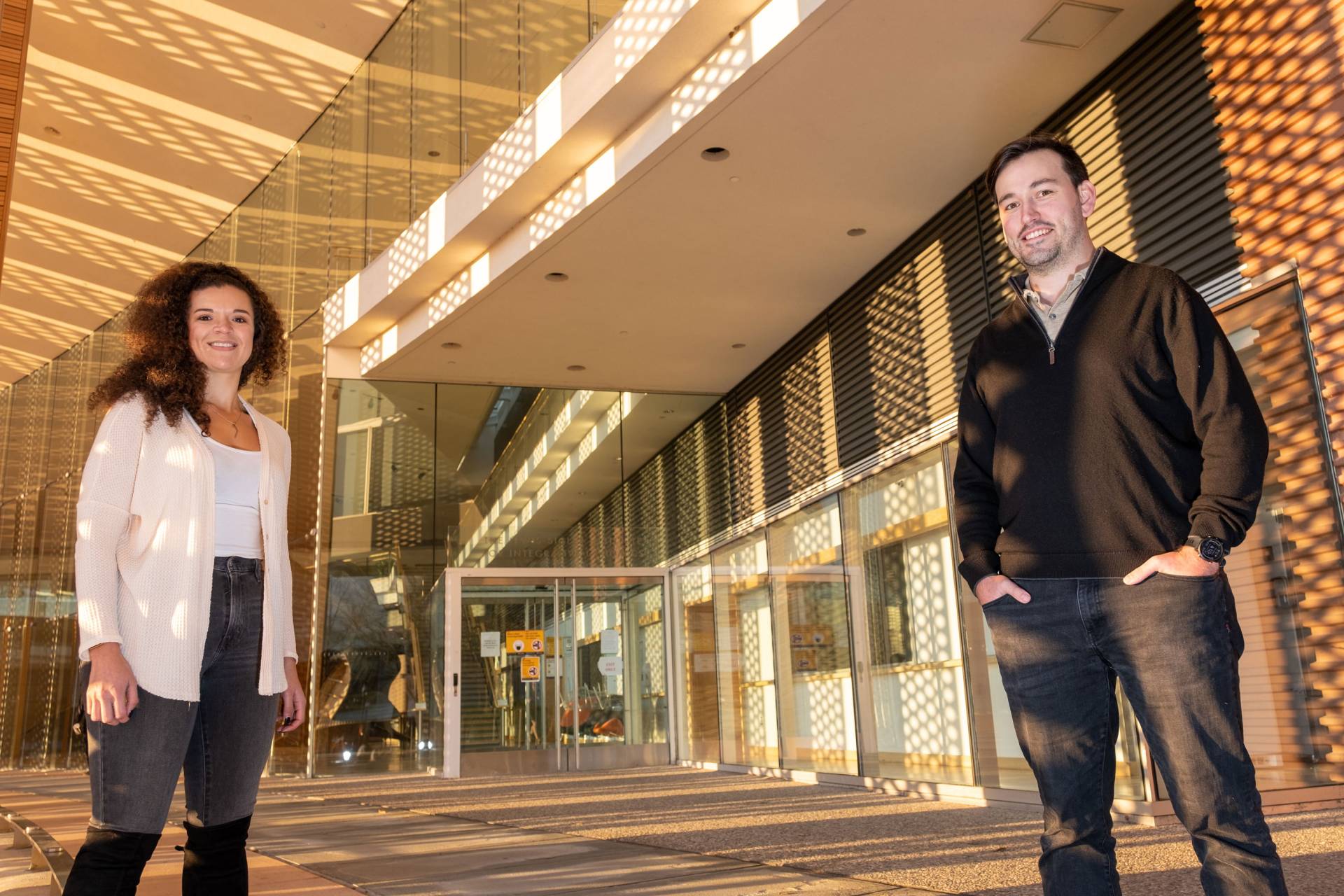 Researchers quantified circulating nutrients taken up and excreted by both the heart and the leg in their new paper in Science. They found that the heart takes up 20 times more fatty acids than the leg. They also discovered that the rate of protein breakdown in the heart is 10 times that of the leg; this is equivalent to the breakdown of 1.5 grams of protein in 12 hours.

A failing heart is often described as “an engine out of fuel,” so understanding its nutrient preferences and metabolic rate is critical to developing therapies that target failure. Presently, there are no treatments that focus exclusively on the heart’s metabolic function.

The heart’s preference for fatty acids — building blocks of fat — makes sense from a physiological standpoint in that fat is virtually always available in the human body. Such an ample substrate is essential to support the energetic cost of a lifetime of heartbeats.

Additional results in the study show that the failing heart consumes more ketone bodies and lactate, organic acids derived from the breakdown of fatty acids and glucose, respectively. This broader appetite may reflect the strategies a non-healthy heart adopts when it has trouble meeting its energy needs through fatty acids alone.

Researchers quantified their findings by looking broadly at circulating nutrients — 600 of them — drawn from more than 100 University of Pennsylvania cardiac patients. They subsequently parsed through all of these nutrients to determine which ones in particular the heart noshes on.

“The body generates a steady supply of circulating fatty acids whether you eat fat or not, so don’t go out and start eating a lot of butter thinking it's good for your heart,” said Rabinowitz, a professor of chemistry and the Lewis-Sigler Institute for Integrative Genomics.

“I think the main message here is that the heart is metabolically dynamic. Heart failure involves substantial alterations of metabolism that, as we understand them better, can drive the development of new therapies,” Rabinowitz said.

The project paired leaders in cardiology and electrophysiology with the rigorous, cutting-edge mass spectrometry capabilities of the Rabinowitz Lab.  Mass spectrometry refers to the method of identifying compounds and measuring their concentration based on their mass and charge.

Alexis Cowan, a fifth-year graduate student under Rabinowitz, was primarily involved with measuring the concentrations of metabolites in patients’ serum samples.

“The major thing that’s exciting to me was the rapid turnover of protein in the heart. You wouldn’t really expect it,” said Cowan. “This seems like a tissue that has evolved to deal with very extreme metabolic requirements, and the high rates of protein turnover are likely a part of that.

“Think about this in context of nutrition: because dietary nutrients can rapidly incorporate into the heart tissue, a low-quality diet has the potential to create structural and functional cardiac deficits,” she added. This may explain heart failure being a catastrophic — and sometimes irreversible — complication of anorexia.

Danielle Murashige of Perelman said, “Here, we lay out a map of metabolism that points to some new research possibilities — such as ketone and amino acid utilization — that hopefully will lead to druggable targets down the road.” 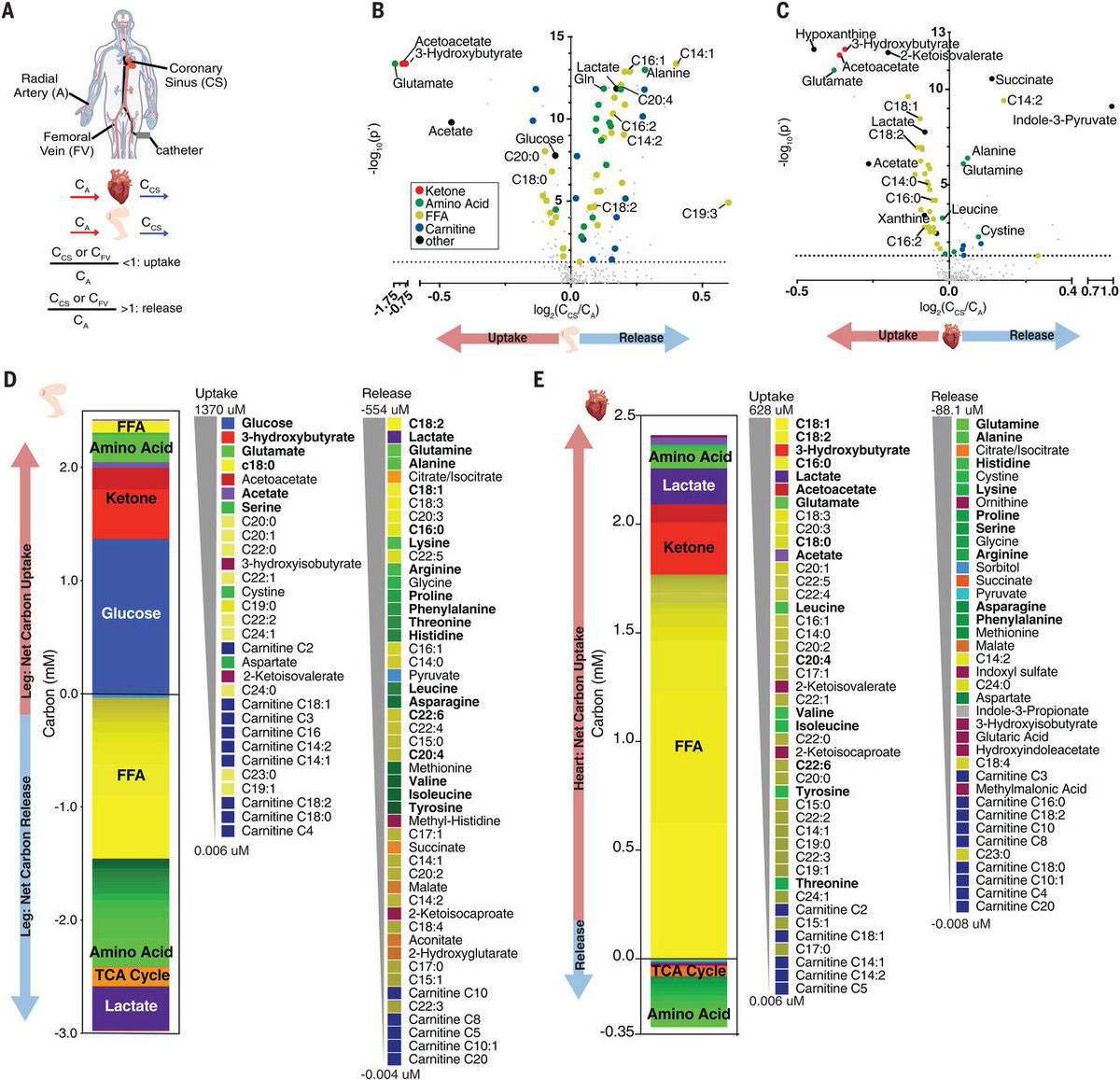 Graphic courtesy of the Rabinowitz Lab

The study arose through scholarship in the Organismal Metabolism Meeting, a group of University of Pennsylvania and Princeton investigators interested in mammalian metabolism at the whole-body level of the organism. Rabinowitz co-founded the group, nicknamed OMG, a few years ago.

Previous studies on heart nutrient consumption have been mostly qualitative, or have used animal models rather than live human hearts to underpin their conclusions. In order to carry out the quantitative mapping reported here, scientists needed a precise and sensitive tool for comprehensive metabolite measurement, a capacity the Rabinowitz lab has steadily built over his 16 years at the University. They also needed blood samples from the coronary sinus, the draining vein for the heart, which requires a great deal of clinical expertise to access.

Blood samples for the study were taken from 110 patients with or without heart failure, and drawn from the coronary sinus, radial artery and femoral vein. The clinical parameters of these patients were representative of the U.S. middle-aged population.

Princeton’s leadership in Liquid Chromatography Mass Spectrometry (LCMS) enabled the scientists to measure the amounts of hundreds of small molecules, or metabolites, in blood serum samples. If the concentration of a metabolite is higher in the vein than the radial artery, then this indicates that the heart tissue released the metabolite. However, if the concentration is higher in the artery, then the heart takes up the metabolite.

Michael Neinast, a postdoctoral research associate with the Rabinowitz Lab, added, “Our advanced spectrometry instruments are capable of measuring many metabolites at the same time, using a very small sample of serum. Past experiments required more sample to measure fewer metabolites.”

The addition of quantitative modeling further contributed to the understanding of tissue-specific rates of metabolism.

“The study was comprehensive because we looked at around 600 metabolites, which is more coverage than most other labs can do at this point,” Cowan said. “We looked at all water-soluble metabolites and fatty acids in the samples. We were not limited to just amino acids or just fatty acids like some of the previous studies undertaken to explore heart metabolism. Instead of targeting our analyses to specific metabolites, we looked at everything at once in an unbiased fashion, which enhanced our confidence in the data.”