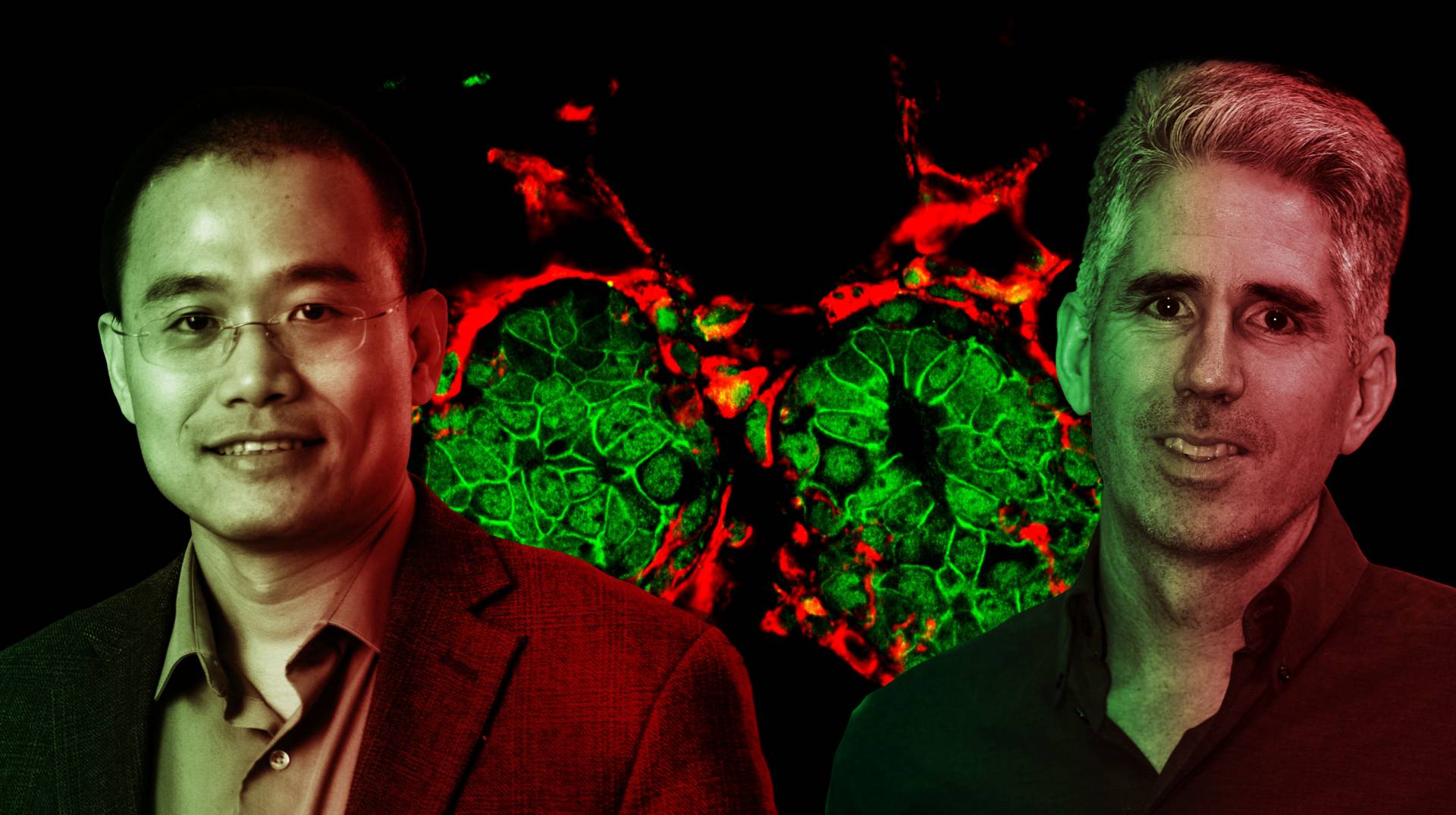 Professors Yibin Kang and Joshua Rabinowitz, two of the three founding members of the new Ludwig Princeton Branch, are pictured in front of a fluorescent background image created by the Kang Lab.

Joshua Rabinowitz looks back over a string of collaborations that have led to today's announcement of a new branch of the Ludwig Institute for Cancer Research at Princeton University.

He cites Craig Thompson, then head of Penn Medicine’s Abramson Cancer Center and now president of Memorial Sloan Kettering, who brought nearly a dozen researchers to visit Rabinowitz’s lab in 2008, when Rabinowitz was a little-known junior faculty member; the renowned cancer physician and scientist Chi Van Dang, who would become the scientific director at Ludwig Cancer Institute; and Eileen White, a distinguished professor of molecular biology and biochemistry at Rutgers University.

Each collaboration contributed to the next, strengthening the research in metabolic analysis that Rabinowitz, a professor of chemistry and the Lewis-Sigler Institute for Integrative Genomics, originally came to Princeton in 2004 to pursue. They paint a portrait of how the very best science is done today — collectively and collaboratively.

Then Rabinowitz mentions perhaps his earliest motivation of all: standing beside his grandfather’s hospital bed, surrounded by oxygen tanks.

“The first relative I lost was my grandfather, to lung cancer,” said Rabinowitz. “It’s a story most people have, right? Seeing the fear and the loss and all those things that cancer invokes. It’s a disease that is horrific, not just by the numbers but emotionally, in the path it takes and the suffering it causes for the patient and the family.”

This week, these strings draw together as Princeton announces plans for its first dedicated cancer center, the Ludwig Princeton Branch, which will have designated space on Princeton’s campus and will draw upon the University’s scholarship in the biological, computational and natural sciences. The clinical translation of discoveries made at the new branch will be conducted in the tri-state area, in partnership with RWJ Barnabas Health and Rutgers Cancer Institute of New Jersey.

Rabinowitz will serve as the branch’s founding director.

“It’s exciting for the University, and it’s exciting for me personally,” said Rabinowitz. “I love starting new things so it’s a perfect fit for my passions, and obviously it’s a medical area with a persistent need. It’s great to see Princeton jump in and use its unique strengths in the fight against cancer.” 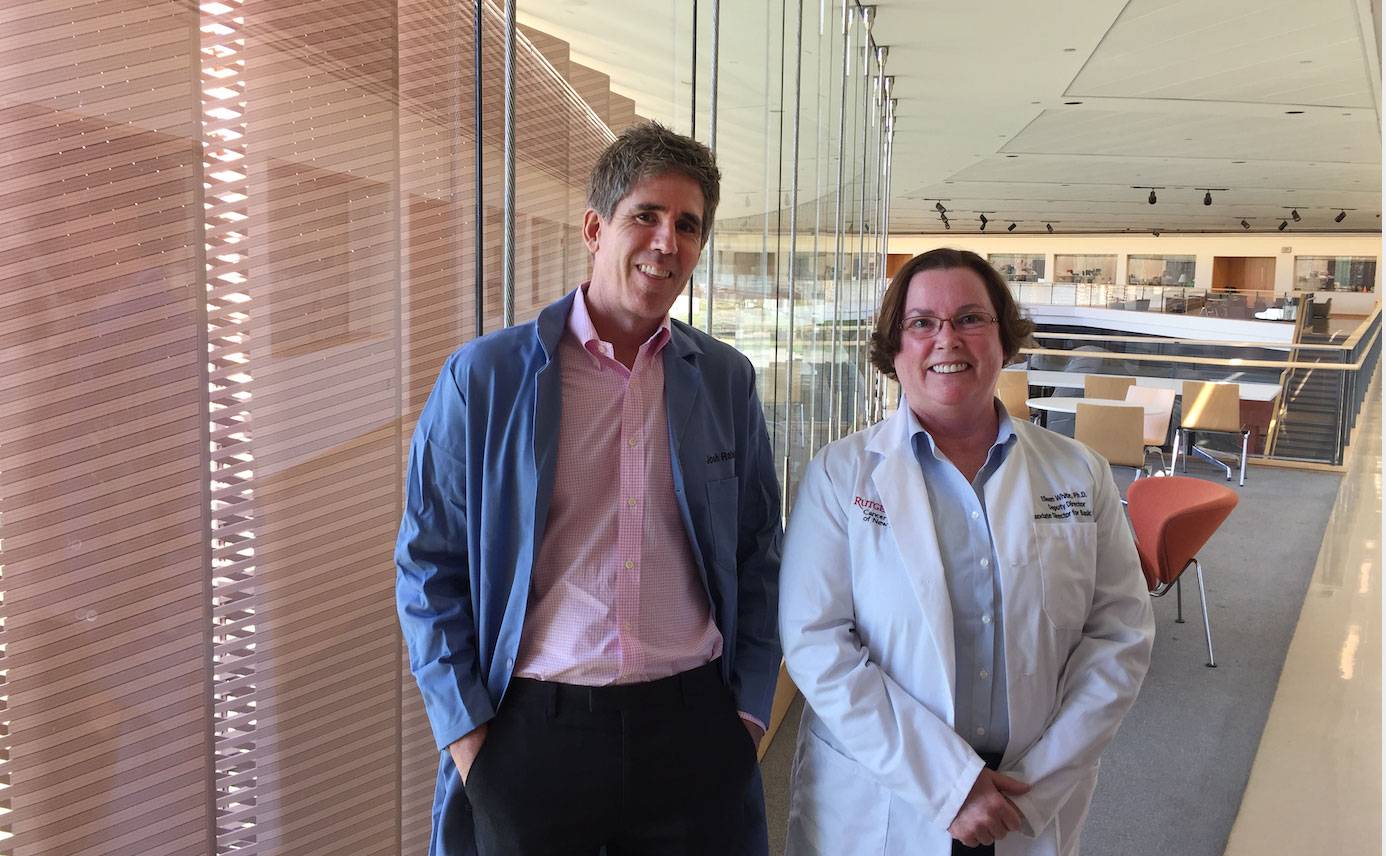 Josh Rabinowitz stands in Icahn Laboratory with longtime collaborator Eileen White of the Rutgers Cancer Institute of New Jersey, who will serve as the new branch’s associate director.

Rabinowitz's passion for the science that happens at the interface of chemistry and biology — and particularly how they meet in the study of metabolism — fueled his research here at Princeton.

Rabinowitz arrived on campus just as pemetrexed — better known by its brand name Alimta — was entering the U.S. market. The chemotherapy medication was discovered by Princeton's own Edward Taylor, and it remains one of the most effective cancer therapies on the market, targeting the folate metabolism of tumors.

Rabinowitz has worked extensively on folate metabolism, collaborating with Hahn Kim, director of Princeton's Small Molecule Screening Center, to come up with a novel treatment that could be combined with Alimta.

The Rabinowitz lab also studies the core pathways that our body uses to make energy from carbohydrates. Classically, glucose is viewed as a carbohydrate fuel and lactate as a carbohydrate-derived waste. But experiments in his lab showed something different: "A metabolite lactate — which is known as the metabolic waste product that builds up in muscles when you have muscle fatigue, and the metabolic waste product that’s made actively by cancer cells — is not just waste. It’s actually one of the most important circulating fuels in the body."

Indeed, lactate plays a dual role in cancer, Rabinowitz said: in some cases it is excreted as waste, but in others it is consumed by tumors as fuel. “There were certainly hints of this before, but I think we did the most definitive experiments to prove it," he said.

Focus on metabolism and diet

Cancer involves uncontrolled cell growth. To power this growth, cancer cells must rapidly convert incoming nutrients into energy and building blocks. The importance of metabolism to cancer is highlighted by metabolism’s central role in cancer diagnosis, with fluorodeoxyglucose PET imaging — a metabolic measurement — the most sensitive way to detect cancer. Metabolic dysfunction is also central to cancer outcomes, with many patients succumbing to cachexia, a metabolic wasting condition.

Surprisingly, diet is another area needing novel research. Cancer patients are routinely given generic advice about diet that has little basis in scientific research, particularly as regards the influence certain foods may have on the proliferation of tumors. In fact, some dietary habits may unwittingly feed the growth of tumors, said Rabinowitz.

“For example, a lot of patients are told to take fish oils, because fish oils are viewed as good fat,” said Rabinowitz. “But there’s also both experimental and clinical evidence that polyunsaturated fats like fish oils accelerate the growth of certain tumors. So here you have dieticians giving very generic health advice to a set of patients who have a really specific health problem, and probably need quite different advice.”

Researchers at the Ludwig Princeton Branch plan to run diet trials that are both scientifically rigorous and immediately beneficial to patients, trials that have historically not received broad funding. Already, a combination of chemotherapy and ketogenic diet developed in the Rabinowitz lab is in clinical trials for pancreatic cancer.

Beyond testing the efficacy of such approaches, the Ludwig Princeton Branch will also use state-of-the-art genetic and chemical approaches to understand how the circuitry between diet, the host, and the tumor works. These broad themes will comprise the core of research at the new branch.

In the fullness of time, Rabinowitz hopes the new branch will offer undergraduate courses, internship opportunities and other avenues for clinical engagement. Graduate students will be actively involved in the research, and there will likely be dedicated postdoctoral fellowships, as well.

In stewarding the Ludwig Princeton Branch, Rabinowitz said he is guided by advice he got after graduate school from a prolific biotech entrepreneur, the late Alejandro Zaffaroni.

“He said, 'Hire the best,'” said Rabinowitz. “This was his very simple advice, and I think it certainly is a principal Princeton motto also. That is the first linchpin of building anything. And it has to be the best on two dimensions: one is scientific excellence, and the second is community engagement, the positivity and commitment to working together to build something with those in the biological and the physical sciences and engineering.

“That will make something that’s unique,” Rabinowitz concluded, “because at very few places in the world do these different disciplines mix as fluidly and freely as at Princeton.”

Read the announcement about the Ludwig Princeton Branch on the Princeton University homepage.