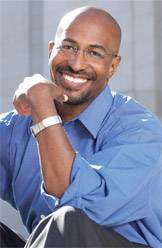 Van Jones, former adviser at the White House Council on Environmental Quality, has been appointed distinguished visiting fellow in the Center for African American Studies and in the Program in Science, Technology and Environmental Policy at the Woodrow Wilson School of Public and International Affairs at Princeton University.

An environmental activist and social entrepreneur, Jones will hold a one-year appointment for the 2010-11 academic year and teach a course in the spring semester focusing on environmental politics, with a special emphasis on policies that create green economic opportunity for the disadvantaged. Fellows in the Center for African American Studies engage in scholarly work for one semester and teach for the other semester.

"We understand that universities are wonderful places for diverse voices to engage in conversation," said Eddie Glaude, the chair of the Center for African American Studies and the William S. Tod Professor of Religion. "The appointment of Van Jones represents our commitment to this value, especially in the context of difficult discussions about environmental challenges and African Americans. We're looking forward to a year of intense engagement with Van. We hope to model the give-and-take that is a hallmark of a genuine learning environment."

Jones is a globally recognized pioneer in human rights and the clean-energy economy. He was named one of the 100 most influential people in the world by Time magazine in 2009, and is the best-selling author of "The Green Collar Economy: How One Solution Can Fix Our Two Biggest Problems," which explores the social, economic and political implications of the creation of green jobs.

Jones was a primary advocate for the Green Jobs Act, which President George W. Bush signed into law in 2007, and served from March to September 2009 as the Obama administration's special adviser for green jobs, enterprise and innovation at the White House Council on Environmental Quality. Jones helped to shape the Obama administration's policy approach to making America's homes more energy efficient.

"I am honored to be joining the distinguished faculty of the Center for African American Studies at Princeton," said Jones. "I am also happy to have been named a fellow at the Woodrow Wilson School. America is at a crossroads, facing economic and ecological crises. The next generation of job-creating, green solutions will be even more challenging to conceive. And they will be even more difficult to implement. I look forward to exploring solutions to our nation's toughest challenges with the students and scholars of Princeton."

Jones' appointment will continue building upon his body of work that has sought to transform the nation's understanding of environmental justice, Glaude said. A 1993 graduate of the Yale Law School, Jones has co-founded three nonprofit organizations: the Ella Baker Center for Human Rights, Color of Change, and Green For All. "For close to two decades, he has been addressing the complex issues of environment, poverty, race and politics," Glaude said. "His tenure at Princeton will bring to the Center for African American Studies and its students a nuanced understanding of these issues."