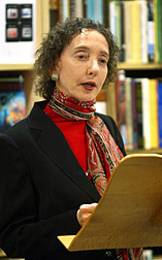 Listen to Oates read an excerpt from "The Girl With the Blackened Eye," part of her latest collection of short fiction, "I Am No One You Know: Stories."

The prize, which recognizes the winner's dedication to book culture, was presented to Oates at a ceremony held in New York City on March 11.

Oates, who has taught at Princeton since 1978, is the Roger S. Berlind '52 Professor in the Humanities and professor of creative writing in the Lewis Center for the Arts. She has written some of the most enduring works in modern American fiction, including the national best-sellers "We Were the Mulvaneys" and "Blonde."

In a nearly 50-year writing career, she has published more than 70 novels, short stories, literary criticism, essays, poetry volumes and plays. She has won the National Book Award, the PEN/Malamud Award for Excellence in Short Fiction, the Common Wealth Award for Distinguished Service in Literature and the Kenyon Review Award for Literary Achievement.

The Ivan Sandrof Lifetime Achievement Award is named for the first president of the National Book Critics Circle, a nonprofit organization consisting of more than 600 active book reviewers. The award previously has been given to renowned publishers, critics and authors including Studs Terkel, Richard Howard, Pauline Kael, Lawrence Ferlinghetti and Leslie Fiedler.