The question from Professor Volker Schröder amused the 15 students who had been participating in an animated classroom discussion: Would the story "Little Red Riding Hood" work if the main character was a boy?

The students in Schröder's freshman seminar, "Into the Woods! What Disney Didn't Tell You About Fairy Tales," had read three versions of the fairy tale as well as literary criticism of the piece during the previous week. The childlike tale from the Brothers Grimm, about a girl visiting her grandmother and encountering a deceitful wolf, came into sharp contrast with earlier versions of the tale, which had violent, sexual undertones. After an hour of discussion on these competing narratives, the question with a once-obvious answer of "yes" was now up for further discussion.

The wolf would be a temptress if Little Red Riding Hood was a boy, said one student. And the boy would have to be adolescent, said another student. 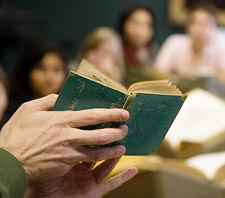 The earliest editions of Hans Christian Andersen's fairy tales did not include illustrations, such as this 1837 edition published in Copenhagen.

"Now you take it for granted that it's a sexual tale," said Schröder, an associate professor of French and Italian. "You all said you hadn't been aware of that before, so I'm wondering why that element -- that you thought was not so central to the story as you know it -- precludes a male protagonist."

Such exchanges take place each time the class meets in the Blair Hall tower on Monday nights. The seminar covers beloved tales such as "Beauty and the Beast," "Cinderella," "Hänsel and Gretel," "Jack and the Beanstalk," "Rumpelstiltskin," "Sleeping Beauty" and "Snow White." The students study multiple versions of the tales, from oral folk tales to newer versions in film, theater, music, ballet and literature. Film screenings, trips to campus theater productions and library visits are all elements of the course.

Along the way, students see themes emerge or disappear as the stories adapt to contemporary audiences, and the students' reactions vary, Schröder said. 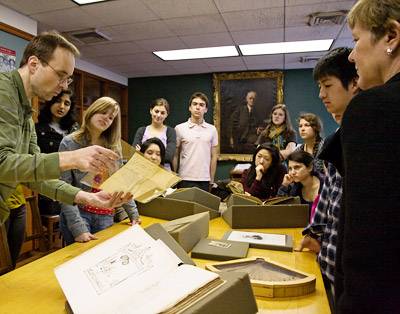 Schröder holds up a letter written by author Hans Christian Andersen to his London publishers in 1870. Schröder and his students recently viewed early editions of fairy tales and other Andersen materials held by the University libraries.

"It depends on their individual background and attitude, especially their previous exposure to non-Disney tales or their willingness to go beyond the familiar toward the unknown," Schröder said. "Many of the students are quite open in that respect and readily, even eagerly, absorb the materials and issues presented by the class. There are always others who try to retain a more 'innocent,' romantic view of fairy tales, even as they process the new information and confront the more adult themes."

Before each class session, students post their thoughts online on a Blackboard course site, and one student initially leads the class discussion. Schröder's intent -- to encourage participation from every student -- is working.

"I like the personal interaction freshman seminars provide you with," said Sejal Pachisia. "The student-led discussions make the class a lot more personal and open. I am very comfortable voicing my opinion."

Classmate Gal Oshri, who led the lively discussion of "Little Red Riding Hood," said he enrolled in the course because he had limited exposure to most fairy tales. 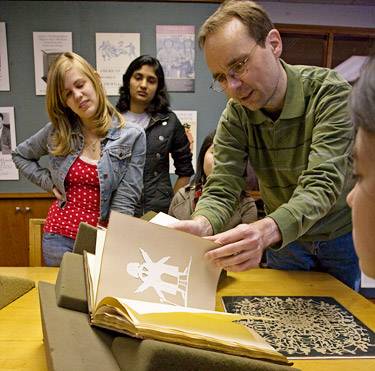 Schröder pages through a scrapbook, dated to about 1855, containing papercut figures that Hans Christian Andersen made to amuse children. The "Windmill Man" papercut figure shown here evolved into a fairy tale called "The Windmill," published in 1865.

"It is enlightening to read the story so many years after hearing or seeing it as a child and noticing how I remember the tales as well as recognizing themes that I did not notice when I was younger," said Oshri. "I wanted to explore this genre because I think it has a large impact on society as well as modern stories and media."

Alexandra Green had enjoyed Disney versions of fairy tales since childhood and became interested in the tales intellectually after playing the role of narrator in her high school's production of the Stephen Sondheim musical "Into the Woods." As a potential civil and environmental engineering major, Green has been taking many math and science courses, and the seminar is her first literature-based class.

"It's definitely one of my favorite classes," Green said. "Each time we read a tale we read multiple versions, and seeing the progression, it's interesting to see how a violent, lewd tale changes, gets molded and becomes a Disney-fied version."

In addition to gaining a better understanding and appreciation for folk and fairy tales, and honing their skills of close reading, Schröder said, his students often leave the class with broader lessons from these seemingly simple stories.

"Often the analysis of the tales also leads into lively ethical discussions, with the fairy tales and their purported 'morals' serving as stimulating test cases that can raise students' awareness of the complexity of ethical issues and judgments," he said.

Behind the scenes: Making 'Into the Woods'