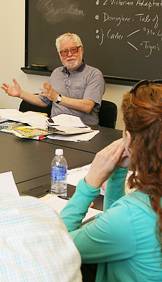 Ulrich Knoepflmacher, a professor emeritus of English, is leading seminars on children's literature for the Teachers as Scholars Summer Institute, which allows K-12 teachers to conduct research and develop programs for their classrooms. The program, which runs through July 20, is sponsored by the Program in Teacher Preparation, the Cotsen Children's Library and area school districts.

Above left: Knoepflmacher's seminars explore a variety of classic children's tales, including "The Jungle Book" by Rudyard Kipling.

Johanna Layne, a teacher at the Twin Lakes Academy in Jacksonville, Fla., enjoys the whimsical surroundings during a class visit to the Cotsen Children's Library. Below left: Teachers view a sample of the Costen library's extensive collection of illustrated children's books, manuscripts, original artwork, prints and educational toys. From left are Madge Nanney of Mandarin Middle School in Jacksonville, Lydia Kirkland of Terry Parker High School in Jacksonville and Constance Beadle of Millstone River Elementary School in West Windsor, N.J. Bottom left: Dana Sheridan, outreach coordinator at the Costen library, offered the teachers a presentation on the library's educational programs, including her traveling "trunk program" on Beatrix Potter and "Peter Rabbit."

For a group of teachers spending two weeks as students on the Princeton campus, fairy tales and other children's stories are a serious topic of discussion.

Participants in the Teachers as Scholars Summer Institute, which runs July 9-20, are delving into works such as "Cinderella," "Beauty and the Beast" and "The Jungle Book" in seminars led by Ulrich Knoepflmacher, a professor emeritus of English who developed Princeton's first courses on children's literature.

Some two dozen teachers -- representing public and private schools in New Jersey as well as public schools in the Jacksonville, Fla., area -- are participating in the program, which enables K-12 teachers to conduct research and develop programs for use in their classrooms. Teachers as Scholars, which began in 2001 and runs seminars throughout the academic year as well as the summer, is sponsored by the Program in Teacher Preparation, the Cotsen Children's Library and area school districts.

Half of the teachers in the summer institute are attending Knoepflmacher's "Children's Narratives for Adults" seminars. The others are participating in "Picturing Paris in Impressionist and Post-Impressionist Painting," led by Caroline Harris, curator of education and academic programs at the Princeton University Art Museum. Harris' seminar examines works by artists such as Éduoard Manet, Claude Monet, Camille Pissarro and Auguste Renoir, and includes excursions to museums in New York City and Philadelphia.

Robbie Knieberg, a special education teacher at Fletcher Middle School in Jacksonville Beach, is one several teachers from Florida who were accepted to the Princeton program after participating in First Coast Scholars, a similar program held at Jacksonville University and the University of North Florida. Knieberg, who teaches a class on fairy tales, said the seminars with Knoepflmacher will enable her to bring more in-depth knowledge of the subject back to her students.

"It's going to help me with the kids in terms of learning about the academic part of fairy tales in a way that they can understand," Knieberg said.

"When I was growing up, I just thought a fairy tale was a fairy tale," she added. "I'm seeing the background behind them, the plays on words, the little digs at society that I wouldn't have seen as a child. … It's good to see the reasoning behind it and why it was done."

Program administrator Helen Martinson said that, in addition to working closely with Princeton scholars, the teachers benefit from collaborating with their peers from a variety of schools in different areas.

"They wouldn't normally see each other to compare notes or share things, so that's a very good exchange," Martinson said.

Knoepflmacher, who is the William and Annie S. Paton Foundation Professor of Ancient and Modern Literature Emeritus, said his seminars allow teachers to revisit classic children's texts that they have taught or would like to incorporate into their lessons, in addition to less familiar works. In the afternoon sessions, the teachers watch and discuss films based on children's literature or meet with Knoepflmacher to confer on research projects. They spent one afternoon of the first week at the Cotsen Children's Library, where they met with outreach coordinator Dana Sheridan and curator Andrea Immel to learn more about the library's educational programs and its extensive collection of illustrated children's books, manuscripts, original artwork, prints and educational toys. 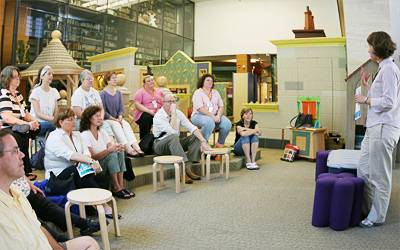 The first half of Knoepflmacher's seminars focused on transformations in fairy tales, touching on various adaptations of "Cinderella" and "Beauty and the Beast" by Victorian authors such as Anne Thackeray Ritchie and Mary Louisa Molesworth as well as modern writers including Emma Donoghue and Angela Carter. During one session, Knoepflmacher even enlivened his readings with impressions of actors George C. Scott and Orson Welles to accentuate the menace of certain characters.

The second week of seminars explores animal fables, including Rudyard Kipling's "The Jungle Book" and "Just So Stories."

Knoepflmacher described the seminars as collaborative and interactive. "We constantly bring in the texts that they read earlier, so together we're building a kind of tapestry," he said.

"The teachers have very interesting things to say that stimulate me as much as I stimulate them," he added.

Knoepflmacher has led his popular Teachers as Scholars seminars for several years, earning praise from the teachers for his lively and engaging style. "They are so enthusiastic, and their love of teaching is heightened after working with him," Martinson said.

David McMillin, a Latin teacher at the Hun School of Princeton, said that while children's literature does not directly relate to his own courses -- he chose the subject because he has young children -- the summer institute is an enriching endeavor for him as a teacher.

"It's a way for a teacher to be a student, to take in information and knowledge, and to be exposed to a wonderful professor," McMillin said. "It's a great learning experience."