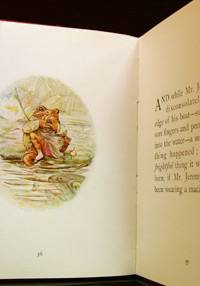 The library exhibition, on view until the end of February, features several of Potter's little books, including "The Tale of Mr. Jeremy Fisher" (shown above). 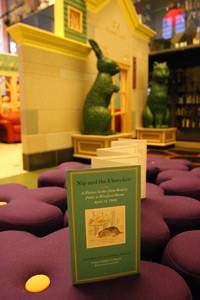 Visitors to the Beatrix Potter exhibition at Cotsen Children's Library can pick up a complimentary copy of "Nip and the Chocolate," a small publication that reproduces for the first time an illustrated letter Beatrix Potter wrote in 1906 about a dog who loved sweets.

At left: Letters that Potter wrote to children tell of frogs who go fishing and pigs who sail on ships. She annotated the stories with vivid pen and ink sketches.

An extensive collection of books, letters, manuscripts and artwork by Beatrix Potter, the author of “The Tale of Peter Rabbit” and other books adored by generations of children, has been presented to Princeton’s Cotsen Children’s Library.

The collection of close to 600 items has been placed on deposit as an intended gift to the University from Lloyd Cotsen, a member of Princeton’s class of 1950 and a longtime collector of children’s literature. Cotsen donated the funds to create the children’s library, which opened in Firestone in 1997.

In an essay for the collection’s lavishly illustrated catalog, Judy Taylor, an expert on Potter, wrote, “There are many people in many places who now collect her work, but Lloyd Cotsen’s Beatrix Potter Collection ranks as probably the best private assemblage outside any major public museum or library.” Included in the collection are first editions of what are known as Potter’s “little books,” letters to friends and family, and photographs taken by Potter as well as an album of family photos.

One of the most remarkable elements of the Potter collection are 30 illustrated letters the author wrote to children of her acquaintance. The letters tell of frogs who go fishing and pigs who sail on ships, and Potter annotated the stories with vivid pen and ink sketches. Several of the characters that originated in the letters later appeared in her books. The letter about the pigs, for instance, became the source of “The Tale of Little Pig Robinson.”

The collection also includes dozens of photographs of Potter, who was born in London in 1866, as a girl and a young woman. The beguiling portraits show Potter holding her pet dormouse, Xarifa, who appeared in the book “The Fairy Caravan,” or her hare, Benjamin Bunny, the model for the character in the little book of the same name. 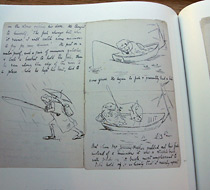 “The collection gives an in-depth look at Beatrix Potter as a writer and artist,” said Andrea Immel, curator at the Cotsen Children’s Library. “Americans tend to think she wrote idyllic stories about animals in the countryside, but that isn’t quite true.” In fact, the vivid animal characters in Potter’s more than 20 books are “disrespectful, naughty and frequently find themselves in trouble,” Immel said. Tom Kitten, for example, went up the chimney exploring and was captured by the wicked old rat Samuel Whiskers and his wife, Anna Maria, who nearly succeeded in making him into a pudding for their dinner.

To celebrate the arrival of the collection in Princeton and the publication of the catalog, the library has mounted an exhibition titled “Don’t Go Into Mr. McGregor’s Garden: The Dangerous World of Beatrix Potter” featuring several of Potter’s little books, including “The Tale of Jemima Puddle-Duck” and “The Tale of Mr. Jeremy Fisher,” as well as other Victorian picture books that Potter admired and that may have influenced her work. The exhibition will be on view until the end of February.

Those who visit the exhibition can pick up a complimentary copy of “Nip and the Chocolate,” a small publication by Cotsen that reproduces for the first time an illustrated letter that Beatrix Potter wrote in 1906 about a dog who loved sweets.