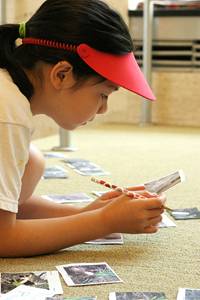 Tiffany, who is 9, selects the photos she plans to use in the book she is assembling during the Cotsen Children's Library workshop. 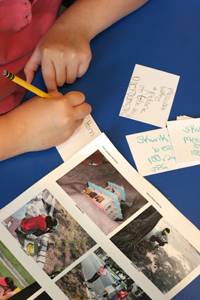 A youngster pens captions for her photos.

Adeniyi, who is 10, sat at a table strewn with glue sticks, scissors and photographs and carefully penned notes for the plot of the book he was writing.

"It's about a bear family who lives in the desert," he explained. "The little bear runs ahead and finds a rabbit and a rat fighting, and he breaks up the fight. His parents tell him, 'Good job.'"

He held up a photograph of the story's dramatic climax: three tiny carved wooden animals posed in the "desert," which was actually a nearby sidewalk.

Adeniyi was one of 15 youngsters participating in a unique workshop July 18-22 at the Cotsen Children's Library, which is located in Princeton's Firestone Library. In "Bookcrafting: Animals in the Picture," taught by Princeton professor Henry Horn, the students learned about Horn's hobby of photographing hand-crafted animal characters in natural environments. The children each received a wooden bear, which they sanded, stained and posed for photographs with other animals. By week's end, each youngster will have created a book of photographs connected by a story.

"They are learning how to create depth in photographs, and how to tell a story in 8 to 10 frames, which is a challenge," said Cory Alperstein, Cotsen's acting program coordinator. "And at the end they will have created a book to bring home to show their parents." 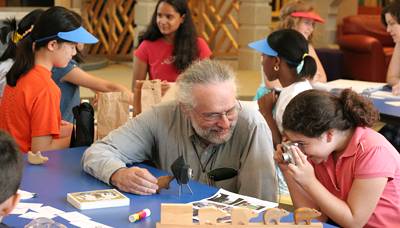 Horn, a professor of ecology and evolutionary biology, has been making wooden animal figures since the late 1980s and bringing them to exotic locales to be photographed.  They have posed in the Grand Canyon, Alaska, Japan and Newfoundland. The stories he creates to go along with the photos emphasize ecological themes and wordplay. His figures are inspired by stone carvings made by the Zuni, an American Indian tribe in New Mexico, but creating a story from photos of the carved animals is purely Horn's invention. "I don't know anyone else who does this," he said.

In addition to their bears, the students had a bag full of squirrels, snakes, owls, mice and foxes at their disposal. Molly, who is 11, penned a story about two bears who are cousins. "They spend the weekend together, and all sorts of crazy weird stuff happens," she said. "I haven't really put together all the details yet."

The workshop is one of several programs offered for children ages 4 through 18 this summer at the Cotsen Children's Library. Others include book discussion groups and workshops on nature and the flower faeries of Prospect Garden.