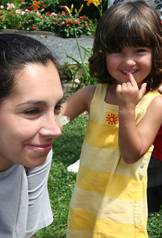 A cabbage white butterfly nestled on the nose of Maria Engst -- after nature educator Pam Newitt placed it there -- during a nature walk at Prospect Gardens that was part of a summer program sponsored by Cotsen Children's Library. Engst's 3-year-old daughter, Grace, looked on with excitement.

At left: On the lookout for butterflies, children examined the flowers at Prospect Gardens with nature educator Pam Newitt (holding net). The group spotted several butterflies, including a tiger swallowtail and a cabbage white, as well as an inchworm and a caterpillar.

Five-year-old Manuel watched intently as Pam Newitt picked up a cabbage white butterfly and placed it on the tip of his mother's nose.

"If you have a sweaty nose and you put a butterfly on it, he'll sit there and drink," Newitt explained. The butterfly was still for several seconds. Manuel was mesmerized.

Manuel, his sister Grace and 15 other children joined Newitt last week at Prospect Gardens for a nature walk on the Princeton University campus, part of a program of summer events offered at the Cotsen Children's Library. Newitt, a nature educator, was teaching the children, who ranged in age from 3 to 5, where to spot butterflies.

"The campus is like a backyard, so whatever you find here you can find in your backyard," Newitt said. "Once kids start noticing that it's not just a butterfly, it's a butterfly on a flower, sharing it with an insect, they realize they're part of an ecosystem."

The children also spotted tiger swallowtail butterflies, a caterpillar and an inchworm amid the sunflowers, purple cone flowers and butterfly weeds at Prospect Gardens. Before their nature walk, they gathered around Newitt at Cotsen, which is located in Firestone Library, as she explained how butterflies grow from caterpillars and showed them drawings of several types of butterflies.

Newitt helped the children create their own butterflies by coloring coffee filters, which served as wings when a clothes pin was fastened to them. A pipe cleaner attached to the end of the clothes pin served as antennae.

Michael, who is 4, chose red, orange and black for the butterfly he made. Those were the colors of a butterfly he recently spotted. "It was at my school when I went outside," he said. He asked his mom if she had coffee filters at home, telling her he planned to teach his 6-year-old sister how to create a butterfly of her own when she came home from camp.

Maria Engst, Manuel's mom, has brought her children to several nature programs at Cotsen. "We love this library," she said. "[The children] talk about the programs for days afterward."

More information on summer programs at the Cotsen Children's Library is available online.