The pages of author Frances Hodgson Burnett's manuscript of "Little Lord Fauntleroy" -- separated for nearly a century -- have been reunited in Princeton University's Firestone Library.

The full autograph manuscript will be part of an exhibition opening Monday, Nov. 15, in the Main Gallery's 18th-Century Window the library. Titled "Little Lord Fauntleroy Comes to Princeton," the exhibition will include selected items from the Vivian Burnett Collection of Frances Hodgson Burnett, recently acquired with the support of the Friends of the Library. 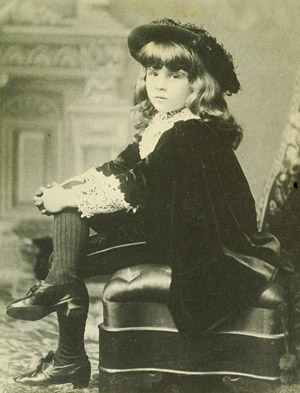 The exhibition, "Little Lord Fauntleroy Comes to Princeton," will include a photograph of author Frances Hodgson Burnett's son Vivian from around 1886 dressed in the character's signature velvet suit. (Photos courtesy of the Princeton University Library Department of Rare Books and Special Collections)

To launch the exhibition, Professor of English Emeritus Ulrich Knoepflmacher will give a public lecture titled "What Happened to Frances Hodgson Burnett's Harry Potter? The Rise and Fall of a 19th-Century Children's Classic" at 5 p.m. Wednesday, Nov. 17, in the gallery. Knoepflmacher, a specialist in Victorian literature who taught courses on children's literature at Princeton for nearly 30 years, is expected to compare Hodgson's Fauntleroy with J.K. Rowling's Harry Potter series -- both best-sellers in their times. Among Knoepflmacher's many books on Victorian literature is the Penguin Books edition of Burnett's "A Little Princess" (2002).

The exhibition will remain on view through Sunday, Jan. 2. The Burnett collection, part of the Manuscripts Division of the Department of Rare Books and Special Collections, contains hundreds of autograph letters, selected manuscripts, photographs and other materials of Burnett, who lived from 1849 to 1924. The successful Anglo-American author of novels, plays and short stories is best known today for children's literature and fantasy fiction, and especially for "Little Lord Fauntleroy" (1886), "A Little Princess" (1904) and "The Secret Garden" (1911).

The exhibition chiefly relates to "Little Lord Fauntleroy," Burnett's rags-to-riches story about Cedric Errol, a poor boy in New York City who becomes heir to the earldom and wealth of his grandfather, the earl of Dorincourt. The book was first serialized in St. Nicholas Magazine (1885-86) and then published by Charles Scribner's Sons of New York.

"We already had most of the original manuscript in our Wilkinson Collection of Mary Mapes Dodge, who was the editor of St. Nicholas magazine, but it was missing the first chapter," said Don Skemer, curator of manuscripts.

A researcher contacted Firestone Library when she learned that Burnett's descendents wanted to find a home for some of her papers. "The family had even been here once as visitors to see our collection, but nobody told us that they had the missing chapter," Skemer said.

The library acquired it two years ago, and has been planning an exhibition since then. Also on display for the first time will be one of the two Little Lord Fauntleroy suits that Burnett had made for her son Vivian. These suits of velvet, lace and silk were modeled in part on the elegant suit depicted in Thomas Gainsborough's famous painting "Blue Boy" (1770). The Fauntleroy suit became something of an American fashion sensation after the book's publication and was popularized again decades later as the result of two movie versions of the book, starring Mary Pickford (1921) and Freddie Bartholomew (1936). 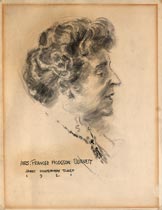 This 1921 portrait of author Frances Hodgson Burnett that is part of the exhibition is by well-known American illustrator James Montgomery Flagg, who also drew the Uncle Sam recruiting poster, "I Want You for U.S. Army."

In a photograph from around 1886, Vivian Burnett is shown with shoulder-length hair and wearing the very same suit on display. The original drawing by the Anglo-American illustrator Reginald Birch for the frontispiece of the first edition of "Little Lord Fauntleroy" depicts Vivian as the earl-to-be. The exhibition also includes a portrait by the well-known American illustrator James Montgomery Flagg of Frances Hodgson Burnett (1921). Flagg was best known for his Uncle Sam recruiting poster, "I Want You for U.S. Army" (1917).

The Burnett collection complements Princeton's significant holdings on Frances Hodgson Burnett in the papers of Mary Mapes Dodge, editor of St. Nicholas Magazine; the archives of Charles Scribner's Sons; and printed editions of Burnett's work in the Rare Books Division.

For more information,contact Skemer at dcskemer@princeton.edu or (609) 258-3186. The Fauntleroy exhibition will be on view from 9 a.m. to 5 p.m. Mondays through Fridays and from noon to 5 p.m. Saturdays and Sundays.