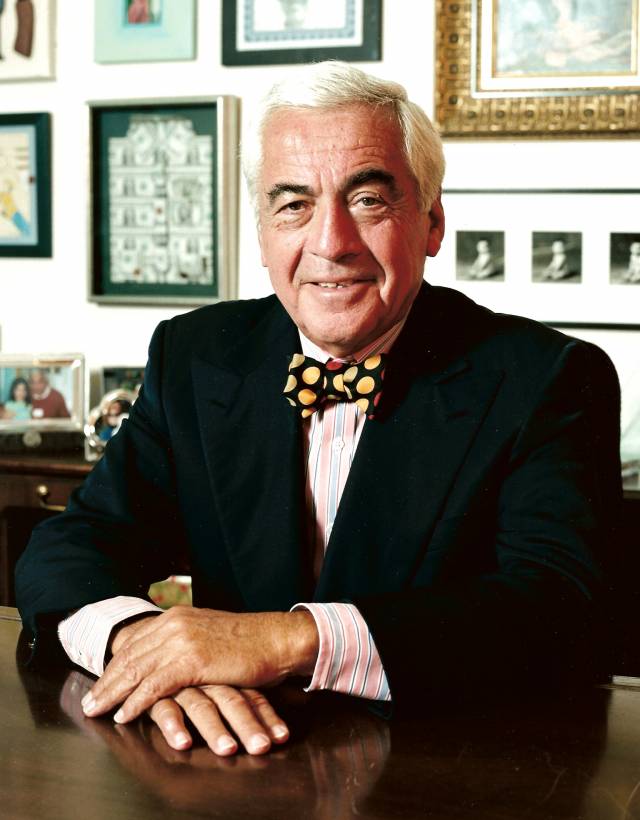 Photo courtesy of the Cotsen family

Lloyd Cotsen, a member of the Class of 1950 and one of Princeton's most generous donors, died May 8 of natural causes at home in Beverly Hills, California. He was 88.

Cotsen was the former chief executive officer and chairman of the board of Neutrogena Corp. He served the University as alumni trustee from 1985-89 and then as charter trustee from 1992-2002 when he became emeritus trustee. His service spanned three Princeton presidencies: of William G. Bowen, Harold T. Shapiro and Shirley M. Tilghman.

A longtime supporter of humanities programs and teaching innovation at Princeton, Cotsen's many gifts to the University established or contributed to:

On the occasion of establishing the Cotsen Endowment for the Humanities in 1987, Bowen said the endowment "provides a unique opportunity to stimulate and reward exceptional scholarship and teaching in the humanities. As a liberal arts university, Princeton places special importance on teaching in the humanities at both the graduate and undergraduate levels, and this initiative will do much to create new excitement in this area."

At the dedication of the Cotsen Children's Library in 1998, Shapiro said: "Cotsen is helping to move Princeton in a direction that we very much wish to go. The journey to higher education begins when a curious child opens up that first good book."

When the Princeton Society of Fellows was established in 1999, Shapiro said: "I am most grateful to my colleague and friend Lloyd Cotsen for his vision and generosity in helping us establish a program that, year after year, will bring new excitement and vigor to the intellectual life of the University."

Commenting on Cotsen's contributions over the decades, H. Kirk Unruh, recording secretary in the Office of Development said: "Lloyd Cotsen’s generosity to the humanities at Princeton was nothing short of transformational. ...Through these gifts, Lloyd demonstrated an exceptional and very heartening commitment to the University's central mission of scholarship, teaching and research. In addition, his remarkable philanthropy included numerous gifts-in-kind that have served to further distinguish Princeton's literary and art collections."

Cotsen was born Feb. 25, 1929, and grew up in New Jersey. He transferred from Rutgers University to Princeton in his sophomore year. At Princeton, Cotsen majored in history; his senior thesis was titled "The Internal Resistance Movement Within Nazi Germany: 1933-1945." A member of Court Club, he participated in Navy ROTC, Center for Jewish Life/Hillel, student government, American Whig-Cliosophic Society, the Nassau Literary Review and the Creative Arts Program.

After Princeton, he spent three years in the Navy during the Korean War — it was in Japan that he purchased his first Japanese bamboo basket, which eventually grew into a collection of more than 900 baskets.

After the war, he returned to Princeton to study architecture, and went on to earn an MBA from Harvard Business School and to work for the cosmetics company owned by his first wife's father. His lifelong passion for archaeology began while working as a field architect at an archaeological site in Lerna, Greece, in the summer of 1954. Throughout his career, he continued to collect art and artifacts ranging from Amish quilts to folk art, and participated in many archaeological excavations in Greece and Italy. He served on the advisory council of Princeton's Department of Art and Archaeology from 1982 to 2003.

"Lloyd was a most supportive presence on the advisory council during my first years as chair (1999-2001)," said Patricia Brown, professor of art and archaeology, emeritus. "We were beginning to plan the renovation of Marquand Library and he offered good counsel on wide range of issues." Marquand is one of the oldest and most extensive art libraries in America. The collection of some 500,000 volumes covers world art and architecture from antiquity to the present, and includes distinguished rare book holdings.

Cotsen's generosity in this field also spanned other institutions: In 2000, the University of California-Los Angeles, in recognition of his contributions, renamed its Institute of Archaeology the Cotsen Institute of Archaeology. He also served as a trustee of the Archaeological Institute of America and president of the board of the American School of Classical Studies at Athens (based in Princeton but not associated with the University). In recognition of these and many other initiatives, Lloyd was awarded Greece's Order of the Phoenix, bestowed on foreigners who have helped raise Greece's international prestige.

In 2001, he founded the Cotsen Foundation for the Art of Teaching.

Cotsen is survived by Margit Sperling-Cotsen, his wife of 21 years; three children from his first marriage, Corinna Cotsen, Tobey Cotsen-Victor and Eric Cotsen; and eight grandchildren. Two of his grandchildren, Aidan Victor and Bennett Victor, are members of Princeton's Class of 2018.

A private funeral service was held on Friday, May 12, in Los Angeles. Plans for a larger memorial service will be announced in the coming weeks.

For those who wish to make a contribution in Cotsen's name, the family asks that they make a donation to a charity of their choice.

View or share comments on a blog intended to honor Cotsen's life and legacy.