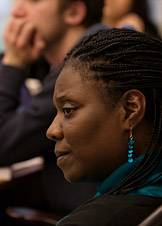 Noliwe Rooks, a lecturer in the Center for African American Studies, leads the freshman seminar "Our Struggling Schools: Race, Culture and Urban Education." The course examines how the problems confronting urban schools are linked to the social, economic and political conditions of cities. Photos: Brian Wilson

This story is part of a series of highlighting spring freshman seminars. Previous stories:

"What's the purpose of education?" Ben Levenson asked his classmates, who were arrayed around a table in Stanhope Hall for the freshman seminar "Our Struggling Schools: Race, Culture and Urban Education."

The others tossed out opinions: To be a good citizen. To make money. To get a good job.

"There's what we hope the purpose of education is, and what it actually is," said Courtney Crumpler, who noted later that the students have talked about urban schools plagued by repeated failures and appalling inequalities.

Other students offered their perspectives, and then their instructor, Noliwe Rooks, walked in. The students' dialogue was not part of a class discussion. It was a freewheeling debate enthusiastically undertaken during a class break.

When asked why the students had stuck around for a philosophical discussion during the only pause in a three-hour class, Levenson said, "We really want to talk about something this important. Our discussion helped me solidify my thoughts."

Passionate debate is common in this class. "It’s rare for me not to have every student say something meaningful," said Rooks, a lecturer in the Center for African American Studies and the center's associate director.

What prompts such meaningful classroom participation is a course that examines how the problems confronting urban schools are linked to the social, economic and political conditions of cities. Rooks uses films, legal briefs, memoirs and social histories to convey historical and contemporary efforts to reform urban education, and to explore the relationship between school reform movements and social justice movements. The course is the High Meadows Foundation Freshman Seminar in African American Studies.

The students' first assignment was to write an essay about how issues of race and class affected their educational experiences before arriving at college.

"Looking at education from a racial perspective has been really interesting," said Adeline Brown. "We read about Brown vs. Board of Ed., and segregation in schools hasn't changed much since then." After she graduates, Brown hopes to participate in Teach for America, the program founded by Princeton alumna Wendy Kopp that recruits recent college graduates from all career interests to teach in urban and rural public schools for two years.

All the students are getting a chance to think about real-world ways to improve education. Rooks has arranged for the class to participate in a project to assist the Trenton public schools with raising low student performance.

The students are researching tutoring and after-school programs, charter school curriculums and other innovations in education, and will present their work to the Trenton public school superintendent at the end of the semester. Their ideas will contribute to a newly fashioned school, for grades 3 through 8, that will place special emphasis on parental involvement and student motivation in an effort to improve student performance. The project is part of a larger initiative by the Center for African American Studies to focus on urban education reform by lending academic assistance to local school districts.

By participating in the project, the students "are on the ground level" in examining ways to best implement education reform, Rooks said.

"I wasn't really aware of what was happening in Trenton" until enrolling in the class, said Monica Chow. "I'm interested in how you solve this problem, and what's keeping others from solving it."

In classroom discussions, Rooks and her students cover historical and contemporary efforts to reform urban education, as well as the relationship between school reform movements and social justice movements.