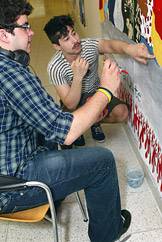 Princeton students enrolled in "The Big Picture: Mural Arts in Philadelphia and Trenton" were involved in planning and executing a public mural in Trenton and also developed their own murals. Here, David Seijas (left) and Alex Knoepflmacher work on a mural they created with classmate Sarah Williams (not pictured) for Terrace Club, an independent eating club for Princeton students. The mural incorporated ideas they had solicited from club members, an approach that was taught in the Atelier class.

In addition to learning the many steps involved in creating public art, students spent several days painting parts of the Trenton mural.

Covering a square block of a wall in Trenton with "Blue No. 4" paint, as simple as it may sound, was the moment when 15 Princeton students saw an ambitious public art project come alive.

"People passing by on the street would stop and say, 'Keep it up!' and 'It looks great!'" said Kate O'Dea, a member of the class of 2013, describing the reaction to the students' work at the Home Rubber Company. "It was inspiring and uplifting -- and totally different from any other class."

O'Dea and the other students were enrolled in "The Big Picture: Mural Arts in Philadelphia and Trenton," which involved them in every aspect of planning and executing a public mural in Trenton. The completed mural was unveiled June 4, and from collecting feedback on the project at community meetings to studying how public murals can be transformative, the students got an intimate look at the many steps involved in creating public art. 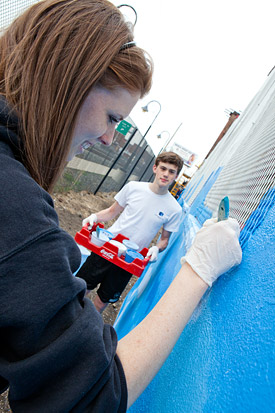 Two students from the Atelier course, Kate O'Dea (foreground) and Robert Lambeth, work on the early stages of the mural at the Home Rubber Company site in Trenton. (Photo by Denise Applewhite)

"The students experienced the mural process firsthand, from the ground up," said Stacy Wolf, associate professor of theater in the Lewis Center for the Arts. The spring semester course was part of the Lewis Center's Atelier program, directed by Wolf, a unique academic approach that brings professional artists to campus for intensive collaborative work with students and faculty in a seminar workshop. "The students saw the engagement with the community in messy, unpredictable ways, and worked with someone who's the master of this process, Jane Golden."

Golden is accustomed to hearing all types of input from members of the community. As the founder of the Philadelphia Mural Arts Program -- and its director for the last 27 years -- she has created more than 3,000 murals in Philadelphia that have transformed public spaces with their colorful, uplifting images featuring community members, historical scenes and inspiring slogans. Golden has consulted on mural projects all over the world, but this is her program's first mural in Trenton.

"Introducing students to this process is like pulling back the curtain," said Golden, who co-taught the class with muralist Shira Walinsky of Philadelphia. "You can study public art, but when you see the journey to creating the work, it's something much richer."

From left, Grace Remington and Knoepflmacher are joined by Shira Walinsky, a muralist who co-taught the Atelier course with Jane Golden, founder of the Philadelphia Mural Arts Program. (Photo by Denise Applewhite)

Soliciting feedback and interacting with residents

The mural project in Trenton is a collaboration among many partners. The University's Center for African American Studies, Lewis Center and Pace Center for Civic Engagement worked with the city of Trenton and several community groups to launch the Trenton Mural Arts Project, a volunteer-based organization that hopes to establish a vibrant mural arts program in the city. The mural at the Home Rubber Company is the project's first undertaking. The organizers hope the mural will be a source of inspiration and pride for residents, as well as an example of community collaboration.

The project was initiated two years ago by the Atelier program, which wanted to do a mural project with Golden, and the Arts and Social Justice Initiative at Princeton's Center for African American Studies. The initiative forges community partnerships in Trenton and the surrounding areas to broaden and enhance scholarship about how the arts have an impact on social justice issues and community collaboration. The two academic programs began working together on the project with the Pace Center, which offers students opportunities to engage in public service and helped facilitate public outreach for the mural project.

Golden immersed her students in the study of public art and in the many steps involved in creating the mural in Trenton, which was created by artist Phillip Adams, who collaborated with students on the project. The class studied the history of mural art, formal issues of design and function, how the mural process has been a powerful tool for social change, and how identity, perception and power shift when communities are part of creating and writing their own histories through public art. Guest artists visited the class to talk about mural design, and the students traveled to Philadelphia to see some of the program's murals there. 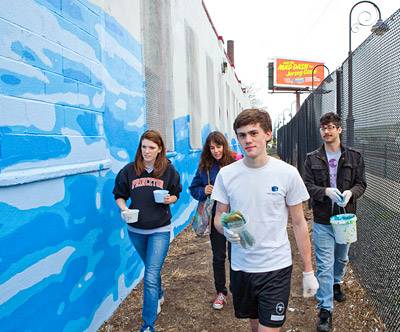 From left, O'Dea, Walinsky, Lambeth and Knoepflmacher complete a day's work at the mural site. (Photo by Denise Applewhite)

Critical to the course was the students' attendance at four community meetings to discuss ideas for the mural with residents and get their feedback. Golden always solicits extensive community input on a public mural project, she said.

"A mural is always about building a collaboration between the artist and the community," Golden said. Attending the meetings gave the students "a sense of what community-based public art means to a community," she said.

For Sarah Williams, a member of the class of 2011, the meetings were a highlight of the course.

"I was really interested in meeting the people the mural was for," she said, adding that spending time with a 7-year-old boy at one of the community meetings "put a face to the process."

The mural's design -- described by its creator, Adams, as "Past Present Future" -- emerged from the meetings. The design includes historic images, a salute to Trenton's industrial origins and an image of water as a representation of the future. 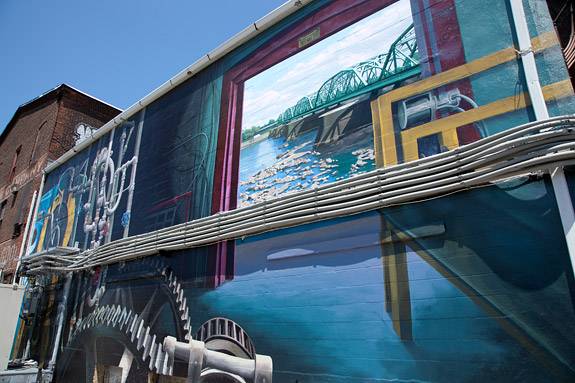 The mural's design incorporates historic images of Trenton that represent its industrial history with a water view that offers hope for the city's future. (Photo by Denise Applewhite)

At the Community Paint Day in April, Princeton students joined more than 100 members of the community to roll up their sleeves and paint parts of the mural. The students spent several additional days painting at the site.

For Robert Lambeth, a member of the class of 2014, the class was a chance to explore his interest in urban and public art.

"It was impressive to see the process of art bringing people together," he said.

For O'Dea, who is majoring in the Woodrow Wilson School of Public and International Affairs, the mural project has been a valuable way to combine her love of art with her interest in education policy.

"I'm thinking about policies to improve the urban educational system, and this project convinced me of how impactful art could be in the process. There is so much potential," said O'Dea, who has worked as a summer intern at an inner-city school in Philadelphia. 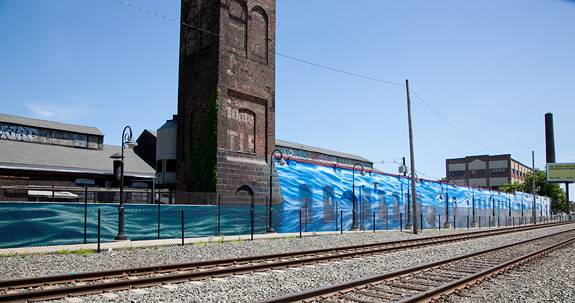 Students design their own murals

For their final assignment, the students answered the question, "If you had the opportunity, what mural would you create and what would its impact be?" Each student -- or in some cases a group of students -- developed a detailed plan for their own mural by picking a location, interviewing people who spend time at the site and executing a design. They also created 5-foot-by-5-foot images of one section of their mural design, which were exhibited at the Friend Center on the Princeton campus in early May.

O'Dea's design, which she planned for an exterior wall of the Young Scholars Charter School in Philadelphia where she has interned, has the word "scholar" prominently displayed with definitions of the word, along with colorful images of students dancing, creating art and studying.

"I interviewed students at the school, and they wanted adjectives to explain to the community what scholar means," she said. "The kids were excited about it."

The mural designed by Williams, along with members of the class of 2012 Alex Knoepflmacher and David Seijas, was planned for a lounge on the second floor of Terrace Club, an independent eating club for Princeton students. Knoepflmacher said the group solicited ideas from the club's members for the design.

"In class we had been talking about generating ideas from the community, rather than imposing your ideas," Knoepflmacher said. "For me, that was the biggest takeaway from the class. As an artist, I'm used to making an image for myself. But here, I'm using my skills to make what the community wants. You almost take the role of an observer," a prospect that resonated with what he is studying as an anthropology major, he said.

Terrace members asked for a mural that would incorporate the club's slogan, "Food=Love," while celebrating members of Terrace and its sous chef of 20 years, Gladys Marin.

The mural "is eclectic and humorous" -- like the club's members, Knoepflmacher said. It has been hung on Terrace's second floor.

As the vibrant blues and yellows of the Trenton mural attract the eyes of passers-by, the project serves, for the students in the class, as a highlight of their Princeton experience.

"I am thrilled to have had the opportunity to contribute to the project, which I believe will enhance the Trenton community," O'Dea said. "Working on the mural design gave me a new level of appreciation for both the challenges and the potential of the city of Trenton, and offered me an invaluable perspective -- one that would be difficult to get in a classroom alone."