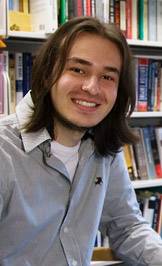 The senior thesis often involves a moment of surprise for Princeton students -- a late-night revelation, an insightful conversation with an adviser or an eye-opening encounter abroad. For Gustavo Silva Cano, it came when he realized his research supported drug legalization in Colombia, a conclusion opposing his personal beliefs.

"I was sort of mugged by reality, because I realized that prohibition has really high human costs," Silva Cano said. "That's one of the great things about the thesis -- it's a great intellectual experience."

Silva Cano, who was born and raised in Bogota, Colombia, is majoring in the Woodrow Wilson School of Public and International Affairs, and pursuing a certificate in Latin American studies. His thesis is a cost-benefit analysis of drug prohibition and legalization in his home country.

During a summer internship with Colombia's high counselor for reintegration, Silva Cano was assigned to evaluate Colombia's drug crop eradication policy. The project, done after his sophomore year at Princeton, launched his interest in the topic, and he approached Professor Miguel Centeno last spring to serve as his thesis adviser.

"The idea sounded like an excellent one," said Centeno, a professor of sociology and international affairs. "It lent itself to the kind of analysis we're trying to teach here, to put a policy dilemma in context and play out the costs and benefits of the alternatives. Gustavo has a perfect case study of alternatives."

Silva Cano and Centeno came up with a dozen precise variables to consider, such as government defense expenditures, economic growth and homicide rates. Then Silva Cano worked to identify the current figures under prohibition and what the figures might be if all drugs were legalized in Colombia. His primary focus was on coca crops and cocaine -- the target of Colombia's "war on drugs."

In addition to documents he had from his internship, he utilized numerous sources to perform his own statistical analysis, including Colombian government databases and reports online, United Nations documents, U.S. government surveys, U.S. think tank reports, news reports, and scholarly books and journals.

Silva Cano found that Colombia spends approximately $7 billion a year on its drug war, equal to what it spends on education or health care. Meanwhile, the war on drugs has resulted in many deaths, displacement, environmental damage, hostile occupations of the countryside by drug cartels and insurgencies, and pressure on cities.

Silva Cano's thesis adviser Miguel Centeno (right), a professor of sociology and international affairs, said the project "lent itself to the kind of analysis we're trying to teach here, to put a policy dilemma in context and play out the costs and benefits of the alternatives."

If drugs were legalized, those funds could be used for infrastructure, health care, education and balancing the federal budget, Silva Cano noted. The government also would be able to collect tax revenue on the sale of cocaine. About 5,000 fewer homicides would occur, and 100,000 fewer people would be internally displaced, according to his analysis.

The potential costs of legalization included diplomatic isolation from the United States, and possibly economic sanctions and loss of American investment. Silva Cano also considered the health risks due to increased drug consumption in the country, but he said the benefits outweighed all of these costs.

"Before starting to write my thesis I was a staunch believer of prohibition. I thought the Colombian government had done a great job, and they actually have. It might be the only nation in the world recently that has had great success against drugs," Silva Cano said. But, he added, "there's no end in sight." 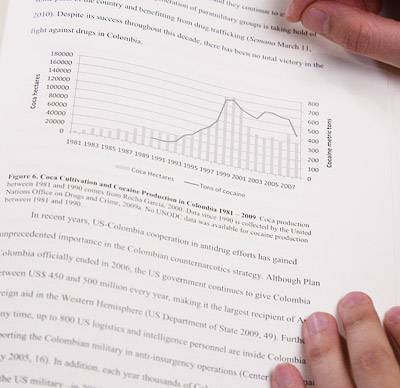 Silva Cano's thesis purposefully avoids ethical and moral issues while examining the political and economic factors that he feels should be part of policymaking decisions.

Centeno and Silva Cano have had weekly meetings to discuss research, analysis and drafts. Along the way, Centeno has recommended sources, given writing advice and -- as a skeptic of any state's ability to effectively prohibit drugs -- played devil's advocate to Silva Cano's arguments.

"I like Professor Centeno's hands-on approach," Silva Cano said. "He is so well regarded but also so approachable and so fun to work with."

Centeno said he had not studied drug legalization in depth, but his work on state-society interaction helped guide Silva Cano's work on what makes a state and its laws most effective. The rest was of his student's making.

"No one has written about the Colombian situation with such precision, detachment and so many variables," Centeno said. The final chapter synthesizing all of Silva Cano's findings is "masterful," Centeno said.

Looking at Colombian politics, Silva Cano acknowledges in his thesis that his recommendations are unlikely to happen anytime soon, as they are contrary to popular opinion in Colombia and abroad, and to politicians' stances at the executive and legislative levels.

After graduating from Princeton, Silva Cano intends to attend the University of Pennsylvania Law School and work in the United States for a few years before returning to Colombia to work in public policy or politics.

Centeno and Silva Cano met weekly to discuss research, analysis and drafts. Together they came up with a dozen precise variables to consider in gauging the effectiveness of Colombia's drug war, such as government defense expenditures, economic growth and homicide rates.