Princeton senior David Karp has parlayed a passion for the aerodynamics of supersonic jets and race cars into $250,000 in no-strings-attached research funding.

The mechanical and aerospace engineering major is one of 15 students nationwide to receive a prestigious fellowship from the Fannie and John Hertz Foundation that provides funding for five years of doctoral study, during which he can tackle whatever scientific challenges he chooses.

Karp plans to attend Stanford University for his doctoral work after a year of graduate study at the University of Cambridge on a Churchill Scholarship, which he won previously. At Stanford he hopes to continue his studies of computational fluid dynamics, using computers to model the aerodynamics of the fastest planes and rockets. 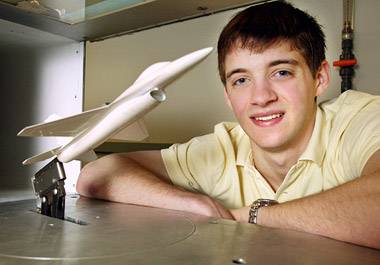 Senior David Karp has received a $250,000 Hertz Fellowship to pursue doctoral work in a field of his choosing. Karp plans to continue studying computer simulations of high-speed aircraft aerodynamics. Advances in such mathematical modeling could reduce reliance on wind tunnel models, such as the one seen here. (Photo: Frank Wojciechowski)

"Engineers used to only use wind tunnels to design aircraft," said Karp, who is from Berwyn, Pa. "You'd put your model in the tunnel, then pull it out and fix something, then test it again. But we want to build planes that can fly at Mach 10 (10 times the speed of sound) and faster, and there aren't many wind tunnels that can model that. With computer simulations, it can do all that for you."

For his senior thesis project, Karp studied the use of computer simulations to optimize the flow of air around an airfoil, a simple two-dimensional representation of the cross section of a wing.

Karp hopes to one day use such computer models to optimize the designs of planes and rockets powered by scramjets, powerful engines that propel some of the world's fastest aircraft. Unlike more conventional jet engines, scramjets require few moving parts because they use the speed of the aircraft to force air into the engine.

In recent years, unmanned aircraft flying at the edge of space have been pushing speed records. In 2004, NASA's X-43a, an experimental aircraft powered by scramjets, topped out at Mach 9.6 flying at an altitude of 110,000 feet. NASA hopes that such aircraft could make spaceflight more affordable and safe, but designing aircraft with the appropriate aerodynamics for traveling at hypersonic speeds is difficult.

Karp said current computer models only can be used as an optimization technique in the design of very simple shapes. New methods for using computer simulations in aircraft design will be required to produce planes and spacecraft that can reach and surpass Mach 10, which is more than 7,600 miles per hour.

"It's a lot of mathematical game playing, messing around with equations until they are in a form that the computer can solve," Karp said. "It's a math-heavy part of engineering, which is what I like about it."

Although Karp is keen on planes, his real passion is for Formula One race cars, which he said set the standard for automobile technology and present an intriguing engineering puzzle. "Airplane dynamics are relatively straightforward," he said, "but race cars are aerodynamic messes. That makes them interesting."

Karp was chosen from nearly 600 applicants for the Hertz Fellowship. Students in the applied sciences and engineering are selected as fellows based on their intellect, ingenuity and potential to bring change to society, according to the Hertz Foundation.