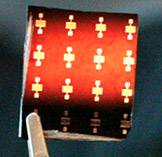 An electronic chip developed by Princeton engineers may be used to check medical devices and drugs for bacterial contamination. The chip is coated with antimicrobial peptides from the skin of an African frog, which can by synthesized in a laboratory. The new sensor would help ensure the survival of the horseshoe crab, whose blood typically has been used to identify contamination. It also would protect a species of bird that relies on the crab for food.

Princeton engineers have developed a sensor that may revolutionize how drugs and medical devices are tested for contamination, and in the process also help ensure the survival of two species of threatened animals.

To be fair, some of the credit goes to an African frog.

In the wild, the African clawed frog produces antibacterial peptides -- small chains of amino acids -- on its skin to protect it from infection. Princeton researchers have found a way to attach these peptides, which can be synthesized in the laboratory, to a small electronic chip that emits an electrical signal when exposed to harmful bacteria, including pathogenic E. coli and salmonella.

"It's a robust, simple platform," said Michael McAlpine, an assistant professor of mechanical and aerospace engineering and the lead researcher on the project. "We think these chips could replace the current method of testing medical devices and drugs."

A paper outlining their development of the sensor was published online Oct. 18 in the Proceedings of the National Academy of Science. The research was funded by the American Asthma Foundation, the Air Force Office of Scientific Research and the National Science Foundation. 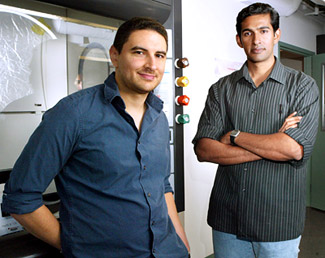 The current testing method has a major drawback: It relies on the blood of the horseshoe crab, a species that is roughly 450 million years old. The horseshoe crab population has declined in recent years, and as a result, so too has the population of a bird that feasts on the crab.

The crab became desirable for testing because its immune system has evolved to cope with the constant threat of invasion from its bacteria-rich environment. Its blood contains antimicrobial cells, known as amebocytes, that defend the crab against bacteria -- similar to the way the peptides protect the African frog's skin.

For almost 40 years, an aqueous extract made from horseshoe crab blood cells, called Limulus amebocyte lysate (LAL), has been used for testing drugs and medical devices for contamination.

In the era before the use of these animal extracts for testing, although drugs and medical devices were sterilized, they would sometimes cause patients to develop fevers due to an immune reaction to endotoxins, which are remnants of bacteria destroyed by the sterilization process. When a sample from a drug or device is added to LAL and the solution hardens into a gel, it indicates the sample is contaminated and not safe for human use.

To produce LAL, the crabs are captured and roughly 30 percent of their blood drained before they are returned to the ocean. There is disagreement on how many crabs die as a result of the procedure, but their estimated mortality rate can be as high as 30 percent, according to the United States Geological Survey. 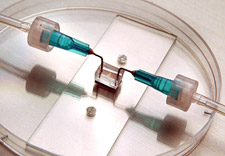 The chip generates an electrical signal as a warning when the frog peptides attached to it come in contact with bacterial contaminants.

A conservative estimate puts the number of horseshoe crabs on the Atlantic Coast between New Jersey and Virginia at between 2.3 to 4.5 million, according to the Ecological Research and Development Group. In recent years, the populations of the horseshoe crab and shore birds that rely on them for food both have been in decline, with the red knot, a rust-colored species of shore bird, of particular concern.

Each spring the bird migrates 20,000 miles from the islands of Tierra del Fuego, off the southern tip of South America, to the Delaware Bay on the east coast of the United States. From April to May, the bird feasts on horseshoe crab eggs found on beaches, nearly doubling its body weight to sustain its health for the long flight south.

Studies have discovered a precipitous decline in the red knot population. One study by researchers at the University of Toronto found that the Tierra del Fuego population of red knots declined from 53,000 birds to 27,000 birds between 2000 and 2002. The decline has been linked to the reduction in the number of horseshoe crabs, as a result of harvesting their blood for medical testing and their use as fishing bait for eel and conch.

In response, Delaware, Maryland and New York have limited the number of crabs that can be harvested each year to less than 150,000, and New Jersey has implemented a moratorium on harvesting the crabs.

The researchers hope that technology based on their electronic chip will eventually replace LAL as the standard for contamination testing, obviating the need for horseshoe crab blood and helping both the crabs and the red knots rebound.

At the same time, producing this new sensory device would not put pressure on the frog species. "No frogs were harmed in the making of this sensor," McAlpine said.