Perspective on: Nature vs. culture in environmental change 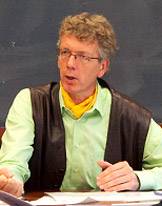 Emmanuel Kreike, an associate professor of history and associated faculty member of the Princeton Environmental Institute, specializes in African history and environmental history. His research focuses on the intersection of war, violence and population movements and their impact on the environment and society. In his latest book, Kreike explores how the perception of environmental change has evolved in the 20th century. 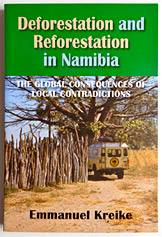 Your book "Deforestation and Reforestation in Namibia: The Global Consequences of Local Contradictions" was published in January 2010. What is the central message you hope to convey?

The book is both an account and a critique of the way scientists and historians have been describing and modeling environmental change, and how these descriptions and models may not help our understanding of environmental problems or improve our ability to solve them.

How do the descriptions and models fail to accurately describe what you have seen happening to the environment in Namibia?

Environmental change cannot be explained in a linear way; change does not occur as a single, continuing process of undisturbed nature being transformed, much to its detriment, into human culture. My extensive research in the Ovambo floodplain in north-central Namibia reveals that chronicling, evaluating and judging the impact of human life on Earth is multilinear and extremely complicated. And to ascertain how much degradation humans have imposed through land use is highly subjective, requiring a much broader view than most models provide.

It is important to come up with a pluralistic model of environmental change, one that allows us to focus on multiple and contradictory processes taking place simultaneously. Humans are responsible for the situation we are in, but we are interacting with processes beyond our control and understanding.

How do historians and scientists differ in the ways they describe environmental change?

Historians who deal with the environment sometimes use models and ideas from the sciences, agriculture, ecology and forestry as shortcuts. Scientists sometimes accept historical data too much at face value. When we talk and think about environmental change, we want to explain it as a perceived outcome. We look for a point of departure in the past -- and that point is seen as "pristine nature." We also tend to be fixated on the outcomes of our behavior, such as pollution and deforestation, but the models we use do not fully explain and investigate the intricacies of the process of change.

Kreike has conducted extensive fieldwork in Namibia for his research on environmental change. These images depict a typical landscape in north-central Namibia, where the floodplains are lush during the country's rainy season (left) from December to April and dry during the rest of the year (right). (Photos by Emmanuel Kreike)

You have a Ph.D. in history from Yale University and recently received a second doctorate in tropical forestry/environmental sciences from Wageningen Agricultural University in the Netherlands. Did this have an impact on the book?

I credit many of the new insights I had during the research for this book to my second doctorate. I wanted to complete the second doctorate to facilitate my ability to work in a truly transdisciplinary way, to better speak to and to understand scientific language and models. Historians and scientists use different languages. This second doctorate enables me to gain a better understanding of what is going on in both disciplines and stimulate more dialogue.

You have chronicled the way environmental change has been described for more than a half century. How have historians told this story?

The perception of environmental change definitely evolved in the 20th century. I have identified three paradigms to explain this phenomenon. In the 1950s, people viewed nature almost as a commodity -- it existed to serve humanity in its quest to develop. Humanity's use and exploitation of the world's natural resources was humanity's right and duty, and any environmental decline that resulted was seen as an acceptable price we paid for progress. This set of beliefs I refer to as the modernization paradigm.

During the 1960s, the story of our relationship to the environment was reinterpreted and became the story of human abuse and violation of nature. People began to describe and view environmental change as a series of negative outcomes, such as environmental decline and pollution. They became concerned with nature's condition, and the green movement took off. I call this the declinist paradigm.

In the 1990s, the story changed again when many people reacted to the Western bias of the traditional green movement and began arguing that some indigenous societies, such as the American Indians, had a different relationship with the environment, a secret way of improving it that was inherently sustainable. The environmental literature began to change. Historians began to focus less on degradation and assert there could be improvement if we took the recipe from these societies to reverse environmental decline. I refer to this as the inclinist paradigm.

Which of the three paradigms do you think is the most useful for understanding human impact on the environment?

There are problems with all of these paradigms, the most glaring of which is they are all based on the same perspective -- they all took "pristine nature" as the starting point and "culture" as the outcome. They portrayed humankind's relationship to nature as an irreversible and linear journey from nature to culture, from wild to domesticated, on a straight, simple path.

How does your research show that environmental change does not follow this path?

This is what I highlight in the book -- it's not black and white, it's not nature to culture.

For example, I studied the settlement history of 30 Namibian villages in detail. The pioneers who founded the villages had cut down trees and deforested the area in order to build their homes when they first settled the area. But after they built their homes, they planted many fruit trees and thus reforested the area. Over time new arrivals continued the cycle: first causing deforestation as they constructed new homes and fields, and next facilitating reforestation with fruit trees.

Furthermore, during this time period, other factors shaped the villages' forest vegetation. One was a reemergence of dangerous animals due to colonial conservation practices, illustrating the unintended consequences of environmental measures. It led to further deforestation, as villagers cut down trees to build fences to protect themselves from predator and elephant populations that had made a comeback and threatened their livestock, crops and fruit trees.

Despite the contradictory vegetation trends, overall, the effect was that the very same sites that were subject to the most intense deforestation -- villages' farms and fields -- were reforested with fruit trees. This phenomenon is borne out by an analysis of a time series of aerial photographs dating from 1943 and 1972 and satellite images from 2005.

The landscape of north-central Namibia is now a park-like setting, consisting of farms, fields and fruit trees. It looks like the Princeton campus in some ways. Homes are surrounded by old trees with big, wide crowns. Descriptions of the landscape 100 years ago are almost identical to what you see today. Comparing the states of the environment today and of 100 years ago thus suggests continuity and sustainability over time. But, the apparent continuity is misleading, because radical political, social and economic changes occurred in those 100 years, such as genocidal warfare, devastating epidemics, horrible famines and massive population displacements, causing very dramatic environmental changes including both deforestation and reforestation.

Did the reforestation with fruit trees ultimately improve the environment and the lives of the villagers?

In terms of environmental resources available to the human population, the reforestation with fruit trees is an improvement over the previous bush vegetation. Tree fruits contribute to health and food security. Fruits ripen early in the rainy season before the field crops become available. The fruit trees also provide environmental services: They buffer temperature fluctuations under their crowns and provide shade. Villagers use the leaves to feed livestock (and they do this without killing the trees). But, at the same time, the selection of fruit trees over other trees species results in a decrease in biodiversity. This story is not captured fully by a homogenous "nature to culture" paradigm, and it shows that to understand environmental change we need to understand the intricacies and contradictions involved.

Kreike is teaching a course this semester on comparative environmental history that draws on different historical periods and world regions, including Africa, the Americas and Asia. (Photo by Denise Applewhite)

How do we judge whether over time an environment is degraded, improved or sustainable?

It is difficult to assess if changes like these are unambiguously positive or negative. We need to abandon the idea that environmental change is a priori bad or good. The scenario I just mentioned suggests that maybe environmental change can't be understood as a singular process. My book therefore argues that it is critical to look at environmental change through multiple lenses allowing for the occurrence of plural processes of change, and study carefully what has happened in the time between the point of departure and the outcome in order to understand the dynamics rather than jumping to hasty conclusions.

Are there other ways the nature vs. culture paradigm causes confusion?

Even many animals are not really unambiguously part of nature or culture. Several of North America's iconic "wild" animals, for example, are neither wild nor domesticated. Turkey, deer, buffalo, pigeon and geese all passed through genetic bottlenecks as humans subjected the species to dramatic selective pressures by (nearly) exterminating them, breeding them back or managing their populations. Many plants don't fit into the two categories of wild or domesticated, either. An example is the bioengineering of crops. These crops are not merely human-created technology, but a hybrid of nature and technology.

Now that this book has been published, what's next?

I am finalizing a second book that proposes a new vocabulary that will shed more light on the issues and hopefully create a deeper understanding of environmental change. The vocabulary we use to analyze and describe the environment has given us many insights, but now we are stuck. I'm not rejecting the achievements of the language that we have been using -- it has brought us here -- but we are in a rut and we have to get out of it to move forward.

History teaches us that every society in the past has believed it understood all, and could find solutions, but no past civilization was ever fully right. And I think that despite the enormous scientific and technological advances of the last decades, we still do not have all the answers today. Nor have we asked all the right questions. Since the origin of the human species, we have been looking for one miracle cure. Environmental change is not about one evil, so it isn't going to be about one cure. As long as we keep using the vocabulary derived from the nature vs. culture dichotomy, we won't be able to escape its conceptual limitations and bring our understanding of environmental change to a new level, which is critical in order to face new and old environmental challenges.