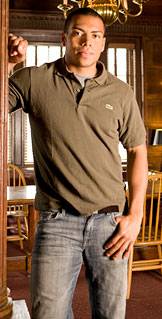 All-Ivy League running back Jordan Culbreath has made national headlines for his battle with the rare blood disorder aplastic anemia that has become an inspirational story of a student-athlete's dedication on and off the football field. He is pictured here his junior year while at the top of his game athletically and academically, months before learning of his diagnosis.

Sitting in a hospital room in October 2009, Princeton senior Cart Kelly came to a realization as he tried to come up with words to help his roommate, Jordan Culbreath, through a day of potentially shocking medical news.

Jo Ann Love, the undergraduate administrator in the Department of Mechanical and Aerospace Engineering, came to the same realization when she tried to make Culbreath's darkest time more manageable. And it's possible that the Dartmouth football team had the same realization -- one yard at a time, 276 times over -- during one of the greatest days ever for a Princeton football player.

The realization, as Love put it, was that when they made Jordan Culbreath, "they broke the mold." 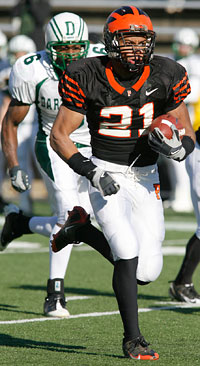 The year before being diagnosed with aplastic anemia, Jordan Culbreath ran for 276 yards and two touchdowns in a 28-10 win over Dartmouth College in the 2008 season finale. His single-game yardage total was the second-highest in Princeton history and fifth-highest in the Ivy League. (Photo by Beverly Schaefer)

A senior in mechanical and aerospace engineering and a two-time All-Ivy League running back, Culbreath has fought a battle with life-threatening aplastic anemia that has become for those who know him on and off the field an inspiring story of a student-athlete's dedication.

"Not only has he stayed positive through it all, but he's somehow managed to be there for other people while dealing with his own issues," said junior Arianna D'Angelo, who has been close friends with Culbreath since 2007. "As much as I try to help him, I think he's the one helping me -- helping me to realize the effect a positive attitude can have on a troubling situation."

Culbreath has made national news headlines for a five-year journey that has been punctuated by early triumphs on the football field, a painful process of unraveling the mystery behind his rare blood disorder, and questions about how the disease would sideline both his athletic and academic careers when he had to withdraw from the University in 2009.

"When he had to withdraw, we were all willing to do anything for him to be successful and graduate," Love said. "When he was in the most serious throes of his illness, his humility and consideration for others was almost unsurpassed in anybody I have met. He was mostly concerned about what would happen with his [senior] thesis partner."

The head football coach at Princeton, Bob Surace, described Culbreath as "an inspiration to our entire program."

Culbreath is on a path to graduate in June in what some have described as a near storybook ending to a story that at times seemed bleak. 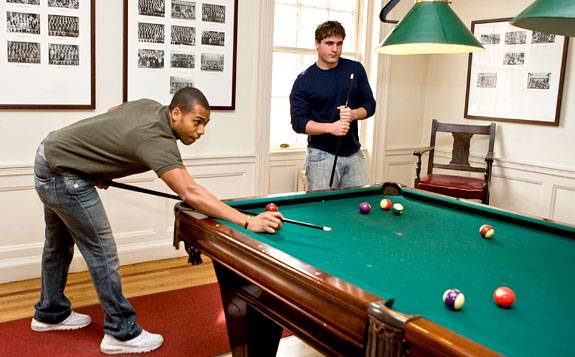 Playing pool with roommate Brad Stetler in the spring of 2009 at their eating club, Cottage Club, Culbreath was unaware that his life was about to take an unexpected turn with the diagnosis of aplastic anemia that came months later. (Photo by Brian Wilson)

A Falls Church, Va., native, Culbreath was not recruited to play football at Princeton, but after a suggestion from his mother, he decided to "walk on" to the team. He worked his way from the bottom and burst onto the national scene his sophomore year during a televised home game against Cornell University.

He rushed for 145 yards and two touchdowns, including a game-winning 58-yard score that anchored the "Top Plays" that night on ESPN's "SportsCenter."

At the same time, he was excelling in the classroom. Before he could focus on the Cornell game, Culbreath spent his time off the field preparing for a midterm exam in his "Mathematical Methods for Engineering Analysis" class taught by Associate Professor of Mechanical and Aerospace Engineering Luigi Martinelli. 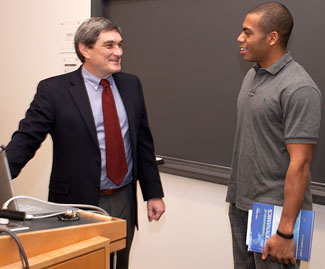 "It was the best midterm in the class," Martinelli said, "and then he went out and had his best game yet." He added, "That's the kind of person that Jordan is."

In his junior year, Culbreath put together a season unmatched at Princeton since the glory days of 1994 graduate Keith Elias, who went on to play for both the New York Giants and Indianapolis Colts. Culbreath rushed for 1,206 yards and was a unanimous first-team All-Ivy League selection.

He rushed for 276 yards and two touchdowns in the season finale, a 28-10 victory over Dartmouth College, with Elias cheering his every move from the sideline. The single-game yardage total ranks second at Princeton and fifth in the Ivy League.

Selected as a captain prior to his senior year, Culbreath was hoping to lead Princeton back into championship contention. He had a work ethic unquestioned by either coach or teammate, but the spark that used to draw a crowd's attention whenever he stepped on the field had been replaced by lethargy and other mysterious symptoms, including headaches and sores inside his mouth.

"I pushed it aside for a while," Culbreath said. "The headaches progressed, and I started to feel more fatigued by the day. I had gotten tired before, but this was totally different. I felt like I was in good shape, but for whatever reason, I just couldn't do things. That's what was so frustrating to me. It was a different kind of fatigue, and I didn't know why." 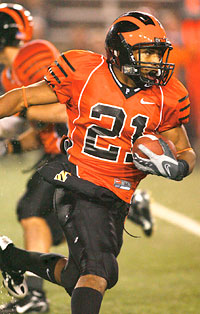 Bursting onto the national scene in a televised game against Cornell University his sophomore year, Culbreath rushed for 145 yards and two touchdowns, including the 58-yard game-winning score. (Photo by Beverly Schaefer)

After an ankle injury suffered in the second game of the season, Culbreath disclosed his symptoms to the football team's physician. He soon was at Robert Wood Johnson University Hospital, where he and his roommate began making decisions about a potential bone marrow biopsy while Culbreath's parents were traveling to Princeton.

"I was trying to come up with something to say or anything I could do to make the situation better,” Kelly said. “He held up extremely well. He isn't the most emotional person and he stayed strong, but I could tell he was concerned."

While Culbreath came to understand the severity of his condition as the doctors ruled out cancer, visitors started filling his hospital room, including his thesis partner, Michael Schoder.

"The first thing he said was, ‘Sorry, this will mess up the thesis,'" said Schoder, currently a second lieutenant in the United States Marine Corps.

Culbreath was diagnosed with the rare and potentially deadly disease aplastic anemia, where the bone marrow does not produce enough new cells to replenish blood cells. Tests were done for a bone marrow match, but none was found.

Highlighting the 'student' in student-athlete

Culbreath withdrew from school in October 2009 and moved to the National Institutes of Health Clinical Center in Bethesda, Md., where specialists put him on a clinical trial that involved five days of receiving an antibody treatment infusion called antithymocyte globulin (ATG) for four hours at a time every six hours. He then had to take a course of immunosuppressant medication for six months. 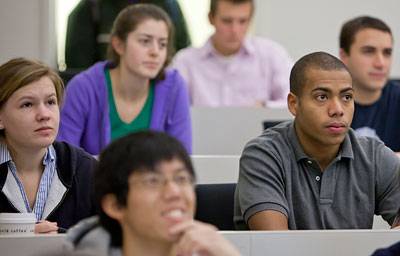 Culbreath is on a path to graduate in June in what some have described as a near storybook ending to a difficult five-year journey. Here, he attends a "Fluid Dynamics" class this semester as part of his concentration in mechanical and aerospace engineering. (Photo by Brian Wilson)

Throughout treatment, both he and the engineering faculty tried to figure out ways to keep Culbreath eligible for graduation, hoping he would one day be well enough to return.

Culbreath wouldn't accept lowered expectations for his thesis with Schoder -- the invention of a cold-water hydrotherapy system -- and with the permission of the faculty, he was allowed to work on the project while on leave.

Culbreath was able to make it back to campus significantly more often during the spring semester of the 2009-10 academic year, bringing with him a renewed energy to continue his life as a student at Princeton.

"It definitely helped in my recovery," Culbreath said. "Being able to be on campus with friends and not isolated in my house helped me get back to normal."

In June, Schoder and Culbreath earned the 2010 Enoch J. Durbin Prize for Engineering Innovation from the University's School of Engineering and Applied Science.

Two yards at the end of a triumphant journey

With his thesis complete, the hydrotherapy system he and his partner invented actually in use by the athletics department, and just a handful of classes remaining between him and graduation, Culbreath started to get the football itch. The treatment had proved successful against the aplastic anemia. Although his status was not given an official medical term, Culbreath refers to it as being "in remission."

Having done the preparation to finish his academic year, now he began getting back in physical shape.

Culbreath consulted with his doctors about required weekly blood tests, and consulted with Surace, a class of 1990 alumnus who was hired following the 2009 football season, ultimately deciding to return to the field.

"We became a better team when he brought his leadership and work ethic back into our locker room," said Surace when announcing Culbreath's return this past August.

Schoder, a sprint football player, said, “Watching Jordan go through this terrible ordeal but then seeing him come out the other side and quietly return to normalcy both as a student and a football player, as if it hadn't been a big deal, as if hardly anything had happened, gave me a sense of his enormous willpower."

Culbreath made his debut at the game at Lehigh University in Bethlehem, Pa., on Sept. 18, then returned home Sept. 25 for a night game against Lafayette College. In overtime, the Lafayette Leopards led by three when Princeton faced a 3rd-and-goal at the two-yard line. Culbreath's number, like it had been so often before, was called.

"I was telling myself while I was lined up," he said, "‘This is why you came back. This is what you play sports for.' I honestly was saying that in my head. It was blocked really well, and I just hit it."

He scored the touchdown, and it was the highlight of the football season.

Culbreath (bottom of the pile) scores a touchdown in the second overtime session to give Princeton a 36-33 win over Lafayette College in the 2010 season. It was his first touchdown after being diagnosed with aplastic anemia the previous year. (Photo by Beverly Schaefer)

While Culbreath's season later ended after a leg injury in a November game against the University of Pennsylvania -- and while the two yards at Lafayette were a tiny fraction of the 1,935 he rushed for in his career -- they were the two yards that anybody who shared a piece of Culbreath's journey will never forget.

"For me personally, Jordan's case was extremely hopeful and served, I think, as a strong reminder to many to take advantage of the gifts and talents we have today because we never know what's just around the corner,” Schoder said.

Culbreath said, "I needed to get back on that field for myself to show myself that this won't stop me from doing what I want to do."

He told himself, "You're going to overcome this illness and you are going to continue your life right where you left off."