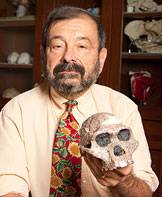 Physical anthropologist Alan Mann studies human growth and development, and has spent more than 40 years examining fossil remains -- mainly teeth -- of two groups that shed light on human origins, australopithecines and Neandertals. He has conducted excavations and fossil molding and casting around the world, and he now uses some of the casts, such as the cast of an australopithecine skull from a site in South Africa shown above, in the lab portions of his classes.

While teaching his "Human Adaptation" class, Princeton University anthropology professor Alan Mann motioned with his arms and legs as he explained the evolution of human joints from earlier vertebrates' joints.

"In your shoulder, you can combine abduction, adduction, flexion and extension and produce a movement called circumduction. Whee!" Mann said, swinging his arm in a circle. "Do you know how many animals can do that on the planet? Chimps, gorillas, orangutans, gibbons, sloths and us."

Mann's sense of wonder about human origins and his bond with all animal species -- living and extinct -- have endeared him to students and colleagues for more than 40 years.

Mann, a physical anthropologist, has focused his research on fossil remains -- mainly teeth -- of australopithecines and Neandertals to understand human growth and development. Mann also teaches a signature summer course in Bordeaux, France, "Modern Human Origins," which culminates in two weeks of excavation at a site once frequented by Neandertals.

"We have had to counter an argument that Neandertals were sort of dumb bunnies that were inferior to modern humans, the Cro-Magnons, who supposedly replaced them," Mann said. The evidence discovered at the site, however, Mann said, "gives us a picture of Neandertals as extraordinarily competent people in an environment that was really tough."

Mann began teaching at Princeton as a visiting professor in 1986 and joined the faculty full time in 2001, when he transferred to emeritus status at the University of Pennsylvania. His research and teaching ties together the sciences and social sciences, and he is "intellectually generous and deeply committed to collegial fellowship," said anthropology professor and department chair Carol Greenhouse.

"Alan is an invaluable resource on any question having to do with the emergence of humanness. … With a major series of prominent publications, Alan has advanced the horizons of scholarship on Neandertals, as well as on other key issues in biological anthropology," she said. "He also has a contagious good humor that I can only imagine gives our students welcome and living proof that serious scholarship and enjoyment go hand in hand."

Mann has a passion for teaching and research that endears him to his students. Above, he demonstrates the various muscle functions in the human leg to his "Human Adaptation" class. (Photo by Brian Wilson)

"Teeth function in a way that is part of your lifetime," Mann said, such as humans' development of "milk" teeth for early childhood and permanent teeth for adulthood.

Mann conducted excavations and fossil molding and casting around the world, including fieldwork in Afghanistan, Australia, Botswana, Croatia, Germany, Hungary, Israel and South Africa. He began his research with australopithecines, a primate species that dates back millions of years. In the 1980s, he began to study Neandertals, a group in the Homo genus that scientists say lived in Europe, disappeared about 30,000 years ago and offered more recent clues about the origins of human development.

At Penn, Mann began working with his collaborator of more than 30 years, Janet Monge. Monge was a doctoral student of Mann's in the 1970s and is now a visiting associate professor at Princeton and an adjunct associate professor of anthropology at Penn.

Mann and Monge began to create databases of images of Neandertal and modern human teeth, looking for patterns that appeared in both groups and would show the connection between the two -- despite many experts' view that modern humans were not descended from Neandertals.

"We had a rocky time, but we solidified a lot of our research methods because of the critiques," Monge said.

"In the West, there has always been a notion that if you didn't look like a white European, you were in some way inferior," Mann said. "What I try to tell students is Neandertals didn't look like us -- they had big brow ridges, they had big faces and chins -- and because they didn't look like us doesn't mean they couldn't behave like us. That appearance doesn't tell you anything about competence and behavioral complexity and ability to perform on a level that is similar to ours."

While Mann noted that his findings on dental links between Neandertals and modern humans remain in dispute among some scientists, other researchers have added to the evidence supporting ancestral ties. In May 2010, researchers in Germany concluded, based on DNA analysis, that Neandertals and humans had mated, and 1 to 4 percent of the human genome of non-Africans today came from Neandertals.

"I jumped up and down with that one," Mann said.

As his work on dental development continues, Mann's research has yielded grants, awards and some unusual opportunities to put his expertise in physical anthropology to use in the public sphere.

Based on their close study of facial features, Mann and Monge have taken on the roles of forensic anthropologists, providing expert testimony in criminal defense trials. They have been able to apply their knowledge of biological variation and cranial structure to help establish an individual's identifying characteristics. In several instances, surveillance cameras showed criminals whose earlobe, forehead or brow shape did not match the defendants being tried, and the anthropologists' expertise freed the accused.

"We use physical anthropology as a way of showing a person is innocent," Mann said. Referring to a case in which he helped free a teenager accused of rape and DNA later confirmed the teenager's innocence, he said, "That, I have to say, was the best thing I've ever done." 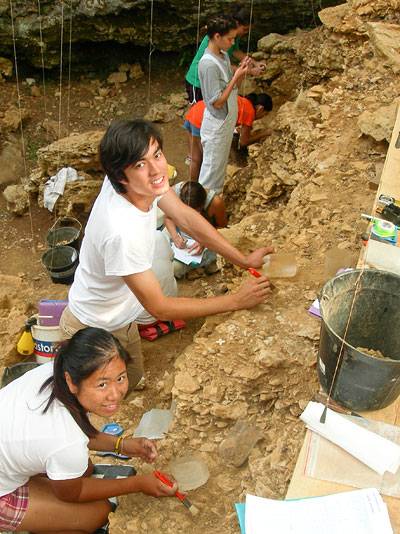 In 1990, Mann was a Fulbright Scholar at the University of Bordeaux, where he became a research associate of the anthropology laboratory and where Bruno Maureille, now head of the lab, was at the time a doctoral student. The two became friends, and in 2001 the French government authorized Maureille and Mann to restart excavations at Les Pradelles. The collapsed cave in southwest France served as a hunting camp for Neandertals to butcher reindeer and horse meat about 40,000 to 80,000 years ago.

Mann modified a summer study abroad course to Bordeaux he had led for years, adding two weeks of excavation. The course, "Modern Human Origins," also involves lectures and visits to important archaeological sites and painted caves, and it focuses on some markers of "human-ness" -- the ability to use tools, the development of language and the production of art.

Mann said he also encourages the students, fewer than 20 each year, to immerse themselves in the French life and culture. Mann, a vegetarian, delights in teaching them about French cuisine.

Senior James Magagna, a comparative literature major who spent summer 2010 in Mann's course, called it "the best six weeks of school I've ever had," and described Mann as "our professor, tour guide, chauffeur, chaperone, all-around avuncular figure." The opportunity to study human origins in southwest France was extraordinary, he said, and Mann provided context that enhanced their experiences.

"During our field trips to the prehistoric caves and archaeological sites, Professor Mann acted as an additional tour guide, asking all the right questions and often clarifying or illuminating points of interest that would have otherwise remained obscure," he said. "His knowledge and enthusiasm really helped bring to life these dark, obscure, historically remote, almost-alien prehistoric sites."

When students arrive in the rural village of Marillac-le-Franc for excavations, Mann ensures that they get hands-on experiences while he supervises, said junior Rocky Rothenberg, who took the course in 2009.

"One of the best things about him is he knows when to pull back a bit," she said. "It was clear he was there to teach us, not put himself in it." 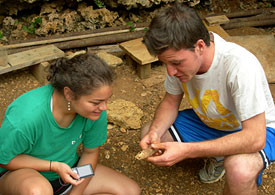 The students alternate between digging and sieving dirt for tiny pieces of bone. Over the years, the teams have found remains from nearly a dozen robust, healthy Neandertals, including a piece of a femur bone this summer. They also have found flint knives and remains of thousands of animals. The fact that Neandertals had separate places for living and butchery, as well as their success in hunting and talent in tool making, shows their intelligence, Mann said.

The researchers preserve the excavated dirt, try to extract DNA from the bones, and map the site and their findings through an electronic surveying telescope, creating a three-dimensional diagram of the site and where each object was found within it.

"Our success is incredible," said Maureille at the University of Bordeaux. The findings, the use of modern technology and the publishing productivity of the French researchers have made Les Pradelles a model site in France, he said.

The excavation will continue until 2012, and then Mann and his collaborators will publish their findings in a book. Les Pradelles, which was partially excavated in the 1960s, will be closed again so more advanced technology can be developed to continue the excavation in the future.

After devoting his career to studying evolution, Mann sees it as a flawed process.

"Evolution produces function, not perfection," Mann said. Each human function has a history and reason, he said, but it also may have some unexpected consequences.

For example, the increasing complexity and size of human brains led braincases to increase in size, which shortened the dental arcade and led most people to need to have their wisdom teeth extracted, Mann said. This is what he calls "a scar of human evolution."

Mann discusses many such examples in the class "Human Adaptation," which he co-teaches with Monge. Using the course as a foundation, Mann and Monge created a museum exhibit called "Surviving: The Body of Evidence" with support from a National Science Foundation grant and the Penn Museum of Archaeology and Anthropology, where both have overseen the physical anthropology collection. The exhibit launched in 2009 to coincide with the 150th anniversary of the publication of Charles Darwin's "On the Origin of Species," and it has since been installed at museums in Cleveland, Houston and Memphis. 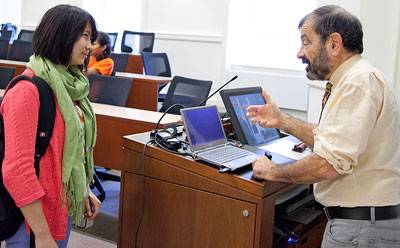 Mann's classes are technical but entertaining because of his passion, said sophomore Jilly Chen (left). Mann's style of teaching makes the material more accessible, she said, "because he doesn't lecture, he just really wants to show you something fascinating." (Photo by Brian Wilson)

In the class, Mann leads the students through the study of movement, the chewing system, and the brain and behavior -- and insists that every Princeton graduate should learn the bones of their body.

Sophomore Jilly Chen said she was unfamiliar with anthropology before she took the class and didn't know what to expect. What she got was a quirky and energetic professor who incorporated words like "groovy" and "chappy" in class, while presenting large amounts of technical information.

"I've gained a lot of insight into how my body works and how it has come to function the way it does," she said. Mann's style of teaching makes the material more accessible, she said, "because he doesn't lecture, he just really wants to show you something fascinating."

Mann takes pride in his teaching, saying he can't lead a class without enthusiasm. He keeps his six framed teaching awards in his office, along with figures of primates and "cave men" given to him by students over the years.

Said Monge, "He's an excellent researcher and excellent teacher -- and he doesn't think of them as being in conflict with each other."