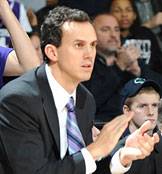 Photo courtesy of the Department of Athletics

Henderson, who most recently served as an assistant coach at Northwestern University, will be introduced at a press conference at noon Thursday, April 21, that will streamed live on the Princeton athletics website.

"I am pleased to announce that Mitch, one of Princeton's terrific point guards, will succeed his teammate, Sydney Johnson, as the head coach of Princeton basketball," said Princeton Director of Athletics Gary Walters. "Mitch has developed and polished his craft at Northwestern, a Big Ten university that is similar in philosophy with its commitment to the student-athlete -- with emphasis on both sides of that hyphen."

Henderson will take over a program that won its 26th Ivy League title -- the most in league history -- this season under Johnson, who was later named head coach at Fairfield University. This season Princeton made its 24th NCAA tournament appearance -- also the most in Ivy history -- after winning a one-game playoff over Harvard on a buzzer-beating shot by junior Douglas Davis in March.

"I've never stopped being a fan since I've graduated," Henderson said. "When Doug's shot went through the net, I jumped off my couch, I was so happy. I was excited for Sydney and his staff, and for the team. I feel like I know our guys already."

Henderson's celebratory leap 15 years earlier following Princeton's famed 1996 NCAA tournament win over top-seeded UCLA has been part of Princeton and NCAA lore ever since. He was a four-year starter at Princeton who played in the NCAA tournament in each of his last three seasons.