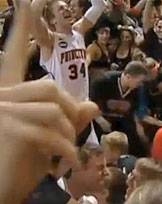 Princeton's Ian Hummer celebrates among Tiger fans after Princeton's last-second victory over Harvard on March 12 to qualify for the NCAA men's basketball tournament. The Princeton women's basketball team has also reached "March Madness" by winning the Ivy League title, marking the first time both the men's and women's teams will compete in the NCAA tournament in the same year. 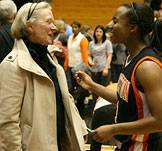 For a school with an athletic history that dates to the time when Abraham Lincoln was president of the United States, it's rare to have a "first" these days.

The last few days, however, for the Princeton University men's and women's basketball teams have been special, dramatic and ultimately historic. When the dust of a wild 10 days had settled, Princeton was in the NCAA basketball tournament for both the men and women, something that had never happened before.

The unprecedented success has captured the attention of Princeton fans near and far. University President Shirley M. Tilghman joined members of the men's and women's teams in Princeton to watch the televised NCAA tournament selections. Faculty, staff and students traveled earlier this month to watch the men vie for the tournament bid. And alumni around the world are organizing viewing parties for the upcoming games.

The men, the 13th seed in the East Region, will play fourth-seeded Kentucky at 2:45 p.m. Thursday, March 17, in Tampa. The game will be broadcast live on CBS.

While Princeton has a storied tradition in men's basketball, this is its first NCAA tournament appearance since 2004.

"We've won 26 Ivy League titles," said men's coach Sydney Johnson. "But this is the first time these guys get to go to the tournament. It's something very special for them, and something I wanted so badly for them."

The Princeton women, the No. 12 seed in the Philadelphia Region, travel to College Park, Md., to take on fifth-seeded Georgetown at 2:50 p.m. Sunday, March 20. That game will be seen on one of the ESPN networks, to be announced.

The women's team is competing in its second straight NCAA tournament, having also won the Ivy title a year ago.

"Winning an Ivy title is a culmination of so much effort," women's head coach Courtney Banghart said. "We knew the target was on our back this year given our success last year, but we really focused on ourselves and it takes a true team effort to win a title -- and that's what we had all season long." 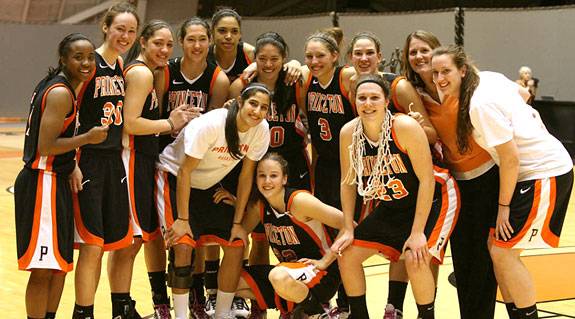 After winning its second consecutive Ivy League title, the Princeton women's basketball team takes a 24-4 record into this year's NCAA tournament. View a gallery of photos of the team's March 5 defeat of Harvard.

Getting to the 'Big Dance'

The Princeton teams' path to "March Madness" began March 5, when the women's team defeated Harvard at Jadwin Gymnasium on campus to win the Ivy championship.

That night in Cambridge, the men's team lost by 13 to the Crimson, giving Harvard at least a share of the league title. That put Princeton in the position of having to beat Penn on March 8 in Philadelphia, which the Tigers did, rallying from eight down in the second half to win 70-58. Princeton earned a share of the program's 26th Ivy League title, the most by any school.

As a result of the co-championship between Princeton and Harvard, a one-game playoff to determine the league's automatic bid to the NCAA tournament was held March 12 at a neutral site, Yale University's John J. Lee Amphitheater. With the building packed and split evenly between fans of the two teams, Princeton and Harvard played one of the great games in Ivy basketball history.

Harvard led most of the way, but never by more than nine points. Princeton pulled even late in the second half, setting up an epic final minute.

In all, there would be four lead changes in the final 61 seconds, including one with 11 seconds left to put Harvard up by one. Princeton's Douglas Davis then brought the ball up court, split two defenders and went up for a shot that was blocked out of bounds, with possession to Princeton with 2.8 seconds to play.

After a timeout, Princeton's Dan Mavraides inbounded to Davis in the corner. Davis then dribbled right, pump-faked, came back to his left and swished a 17-foot jump shot as time expired, setting off a wild celebration. The outcome wasn't official until the referees confirmed that the shot had left Davis' hands before the clock showed all zeroes.

"Originally I thought they were going to deny me the ball, but I was able to get open," Davis said. "I took a couple dribbles, was able to fade. It felt good. It went in, I fell on the ground, and that was the worst decision that I ever made because everybody jumped on me." 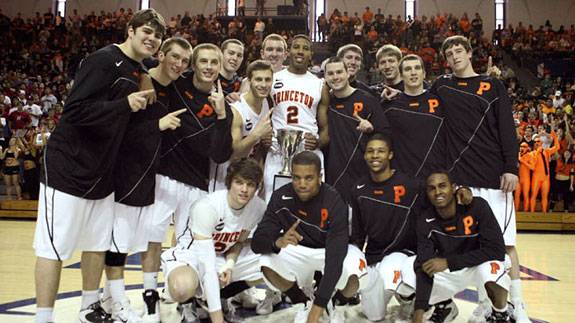 The Princeton men's basketball team is returning to the NCAA tournament for the first time since 2004. The Tigers have now won 26 Ivy League titles, the most of any school. View a gallery of photos of the team's March 12 victory over Harvard to qualify for the NCAAs.

The twin appearances in the NCAA tournament cap a four-year turnaround for both the men and women under Johnson and Banghart, who were hired to take over struggling programs within weeks of each other.

Johnson's team was 6-23 his first year -- this year, the Tigers are 25-6 heading into the "Big Dance." Banghart went 7-23 that same first year, but her team went 26-3 a year ago and will take a 24-4 record into this year's tournament, despite losing perhaps its top player, sophomore Niveen Rasheed, early in the year with a knee injury.

As for the men, getting to the tournament this year was even more special because of the inspiration of two people close to the program who recently passed away. Marvin Bressler, a sociology professor emeritus and longtime mentor to generations of Princeton basketball players, died last summer at the age of 87. Fan Christian "Crunch" Regulski, who sat on the team bench during games during the end of his fight with brain cancer, died in February at the age of 11.

The Frist Campus Center will host viewings of both first-round tournament games in its East and West TV lounges, with light refreshments available.

For more information on both teams, visit the Princeton athletics website.