Video feature: Reunions bring back Princeton alumni through the ages 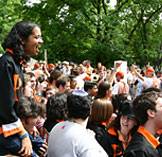 The annual P-rade, in which alumni classes process across campus, has become a key feature of Princeton's historic Reunions. Here, members of the class of 2004 cheer on the P-rade as it passes by.

By the 1920s, families were welcome to join the P-rade. Children of the class of 1895 arrived with matching outfits and umbrellas. View footage on YouTube of the Class of 1895 in 1915.

View video on YouTube from the class of 1921's fifth reunion, including a march through town, showing the Princeton Borough of 1926. Read more from the Seeley G. Mudd Manuscript Library.

During the 1960s, Princeton produced newsreels of campus activities. View video on YouTube from the class of 1911, back for their 50th reunion. Read more from the Seeley G. Mudd Manuscript Library.

View footage on YouTube from a student-produced video yearbook, featuring the class of 1961's 25th reunion and the class of 1986's first. Read more from the Seeley G. Mudd Manuscript Library.

Princeton alumni have returned to campus to celebrate Commencement festivities and reunite with friends since the earliest days of the institution in the 1700s, when it was still known as The College of New Jersey. Beginning as informal gatherings of alumni, faculty and guest speakers, a milestone was reached at Princeton's 100th Commencement in 1847 that drew 700 graduates. Today, more than 20,000 alumni, family and friends participate in this annual gathering, known as Reunions. This year, the campus will be awash with Princetonians past and present Thursday through Sunday, May 26-29.

Play the "Reunions through the years" video

The marching of the classes across campus, by which alumni processed to class dinners and the traditional Yale baseball game, quickly grew into the modern P-rade, complete with costumes, banners and hired bands, which is a distinctive and colorful highlight of Reunions. Read more at the Mudd Manuscript Library's Reunions FAQ. 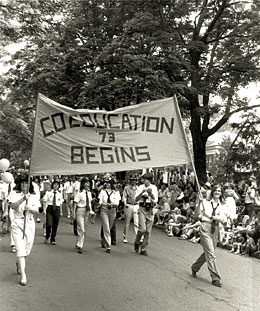 Some of the first women to graduate from Princeton after the implementation of coeducation march down Prospect Avenue in the P-rade in 1973. (Photo courtesy of Princeton Alumni Weekly Photo Collection) 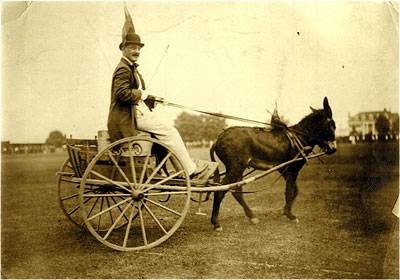 Animals historically also have participated in Reunions; here, a member of the class of 1896 is pulled across University Field by a donkey. (Photo courtesy of Historic Photograph Colllection)

Reunions bring back Princeton alumni through the ages

Reunions Online: Princeton is where you are