More than a sign of sleepiness, yawning may cool the brain

Though considered a mark of boredom or fatigue, yawning might also be a trait of the hot-headed. Literally.

A study led by Andrew Gallup, a postdoctoral research associate in Princeton University's Department of Ecology and Evolutionary Biology, is the first involving humans to show that yawning frequency varies with the season and that people are less likely to yawn when the heat outdoors exceeds body temperature. Gallup and his co-author Omar Eldakar, a postdoctoral fellow in the University of Arizona's Center for Insect Science, report this month in the journal Frontiers in Evolutionary Neuroscience that this seasonal disparity indicates that yawning could serve as a method for regulating brain temperature.

Gallup and Eldakar documented the yawning frequency of 160 people in the winter and summer in Tucson, Ariz., with 80 people for each season. They found that participants were more likely to yawn in the winter, as opposed to the summer when ambient temperatures were equal to or exceeding body temperature. The researchers concluded that warmer temperatures provide no relief for overheated brains, which, according to the thermoregulatory theory of yawning, stay cool via a heat exchange with the air drawn in during a yawn. 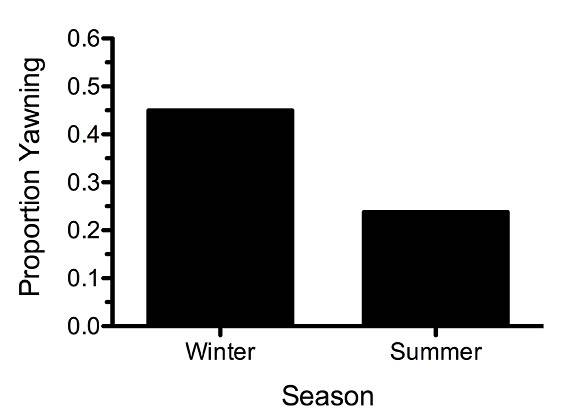 People yawn less frequently when outdoor temperatures exceed body temperature, suggesting that yawning could be a natural brain-cooling mechanism, Princeton University and University of Arizona researchers reported. They recorded yawning frequency in 160 people in summer and winter in Tucson, Ariz., 80 for each season. They found that nearly half of participants yawned in winter, opposed to less than a quarter in the summertime. (Image by Andrew Gallup)

Gallup describes the findings as follows:

This provides additional support for the view that the mechanisms controlling the expression of yawning are involved in thermoregulatory physiology. Despite numerous theories posited in the past few decades, very little experimental research has been done to uncover the biological function of yawning, and there is still no consensus about its purpose among the dozen or so researchers studying the topic today.

"Enter the brain cooling, or thermoregulatory, hypothesis, which proposes that yawning is triggered by increases in brain temperature, and that the physiological consequences of a yawn act to promote brain cooling. I participated in a study [published in Frontiers in Evolutionary Neuroscience in September 2010] that confirmed this dynamic after we observed changes in the brain temperature of rats before and after the animals yawned. The cooling effect of yawning is thought to result from enhanced blood flow to the brain caused by stretching of the jaw, as well as countercurrent heat exchange with the ambient air that accompanies the deep inhalation.

"According to the brain cooling hypothesis, it is the temperature of the ambient air that gives a yawn its utility. Thus yawning should be counterproductive -- and therefore suppressed -- in ambient temperatures at or exceeding body temperature because taking a deep inhalation of air would not promote cooling. In other words, there should be a 'thermal window' or a relatively narrow range of ambient temperatures in which to expect highest rates of yawning.

"To test this theory in humans, I worked with Omar Eldakar to conduct a field-observational experiment that explored the relationship between ambient temperature and yawning frequency. We measured the incidence of yawning among people outdoors during the summer and winter months in Arizona. Summer conditions provided temperatures that matched or slightly exceeded body temperature (an average of 98.6 degrees Fahrenheit) with relatively low humidity, while winter conditions exhibited milder temperatures (71 degrees Fahrenheit on average) and slightly higher humidity. We randomly selected 160 pedestrians (80 for each season) and, because yawning is contagious, had them view images of people yawning.

"Our study accordingly showed a higher incidence of yawning across seasons when ambient temperatures were lower, even after statistically controlling for other features such as humidity, time spent outside and the amount of sleep the night before. Nearly half of the people in the winter session yawned, as opposed to less than a quarter of summer participants.

"Furthermore, when analyzing data for each season separately, we observed that yawning was related to the length of time a person spent outside exposed to the climate conditions. This was particularly true during the summer when the proportion of individuals yawning dropped significantly as the length of time spent outside increased prior to testing. Nearly 40 percent of participants yawned within the first five minutes outside, but the percentage of summertime yawners dropped to less than 10 percent thereafter. An inverse effect was observed in the winter, but the proportion of people who yawned increased only slightly for those who spent more than five minutes outdoors.

"This is the first report to show that yawning frequency varies from season to season. The applications of this research are intriguing, not only in terms of basic physiological knowledge, but also for better understanding diseases and conditions, such as multiple sclerosis or epilepsy, that are accompanied by frequent yawning and thermoregulatory dysfunction. These results provide additional support for the view that excessive yawning may be used as a diagnostic tool for identifying instances of diminished thermoregulation."

Gallup is available to discuss his research with interested members of the news media and can be contacted at a.c.gallup@gmail.com, or through Princeton science writer Morgan Kelly at (609) 258-5729, or mgnkelly@princeton.edu.

This research was supported by a grant from the National Institutes of Health.

From dark hearts comes the kindness of mankind