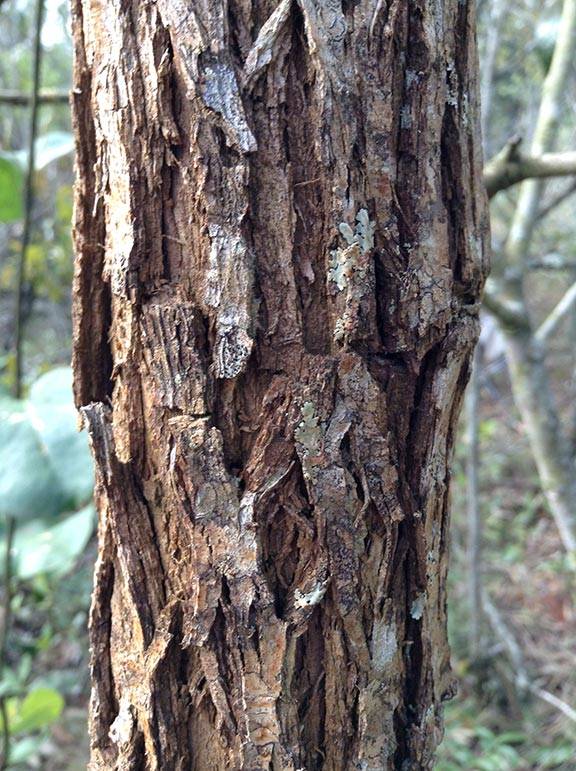 A Princeton University-led study has found that trees in fire-prone areas around the world develop thicker bark. For instance, the tree Connarus suberosus grows in the Brazilian Cerrado — which can burn every three to seven years and contains some of the thickest barked species in the world — has a stem diameter that is 30 percent bark. The findings suggest that bark thickness could help predict which forests and savannas will survive a warmer climate in which wildfires are expected to increase in frequency. (Photo by Adam Pellegrini, Stanford University)

A new study has found that trees worldwide develop thicker bark when they live in fire-prone areas. The findings suggest that bark thickness could help predict which forests and savannas will survive a warmer climate in which wildfires are expected to increase in frequency.

Trees in regions where fire is common, such as savannas and the forests of western North America, tend to have thicker bark, while trees in tropical rainforests have thinner bark, researchers at Princeton University and collaborating institutions reported Jan. 9 in the journal Ecology Letters. Bark protects the inside of the trunk from overheating and is one of a handful of adaptations that trees use to survive fire.

"We found large-scale evidence that bark thickness is a fire-tolerance trait, and we showed this is the case not just in a particular biome such as a savanna, but across different types of forests, across regions and across continents," said first author Adam Pellegrini, a NOAA Climate and Global Change Postdoctoral Fellow at Stanford University who led the study while a graduate student in Princeton's Department of Ecology and Evolutionary Biology.

The research suggests that the link between bark thickness and fire resistance should be included in global climate models, Pellegrini said. "Trees from regions that burn frequently could still become vulnerable if the risk of fire increases," he said. "The open question is whether the bark is thick enough to help trees survive."

Pellegrini and his colleagues looked at 572 tree species in regions across the globe. They compared bark thickness from trees in areas that experience frequent wildfires — and where rain falls only seasonally — to trees in regions where fires are rare, such as tropical rainforests. They found that in areas where fires are frequent, most trees, no matter the species, have thicker bark than closely related tree species growing in low-fire areas. 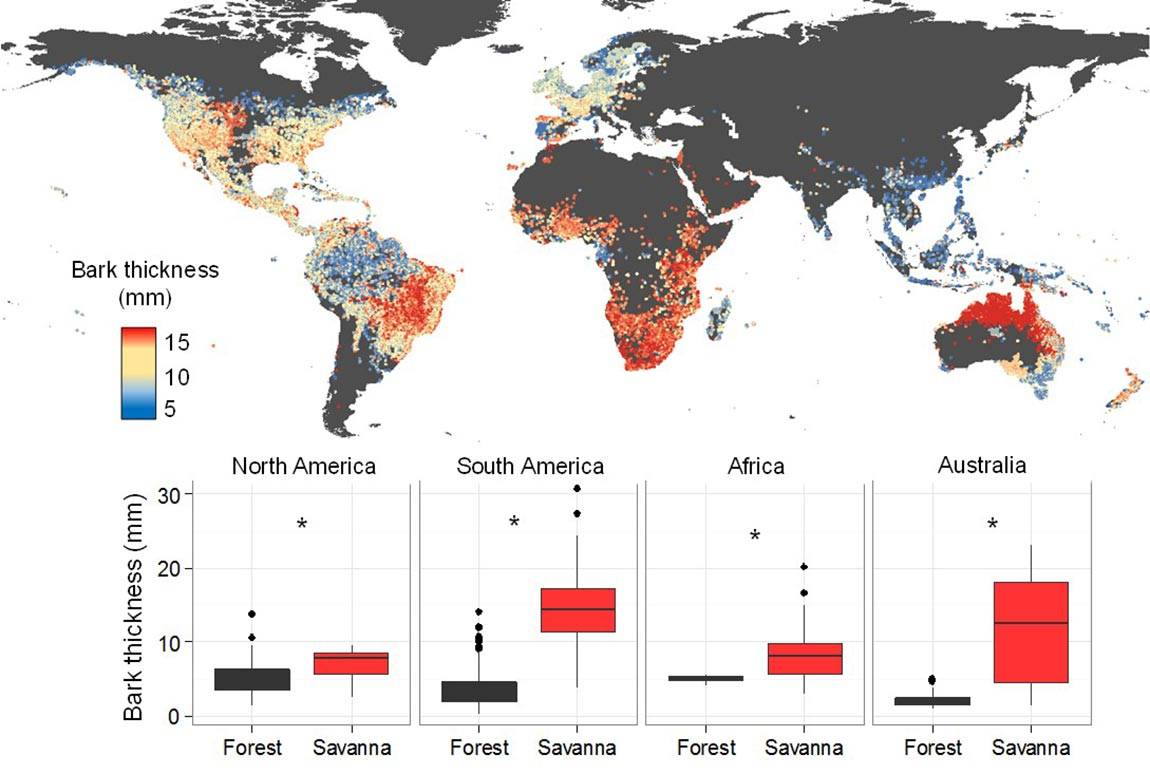 The researchers found that tree-bark thickness across the globe is greater in ecosystems with higher incidence of fire. The figure shows that tree bark grows thicker (red) in areas with savannas, which tend to burn every two to five years, and thinner (blue) in less frequently burned ecosystems, such as tropical rainforests. Trees in forests in the lower half of North America, which experience periodic fires, have middle to thick amounts of bark (yellow). The graphs (bottom) show the range of bark thickness between forests and savannas for four continents. (Image courtesy of Ecology Letters)

The study suggests that tropical rainforests — which are mostly composed of thin-barked trees — may have a more difficult time recovering from fire, whereas savannas and seasonal forests with thickly barked trees should be able to better withstand fire. A savanna was defined as land with continuous grass cover that is 20 to 80 percent trees, while a forest was defined as having complete tree coverage and little to no grass.

Periodic fires are necessary for the health of some types of savannas and forests. Fires burn off excess plant matter such as dead wood and grass — as well as competing fire-sensitive species — and rejuvenate the soil so that the dominant, fire-resistant plant species can flourish. However, fires also can be detrimental to the environment by releasing stored carbon back into the atmosphere, and causing the decades-long loss of a valuable carbon-storage system.

To find out, the researchers compared related tree species that live in fire-prone areas against those that are found in non-fire-prone regions. The researchers found that the bark thickness of closely related species is linked to whether the species lived in a fire-prone or non-fire-prone region, which provided further evidence that bark thickness is an evolutionary adaptation to fire.Tim Coulson, a professor of zoology at Oxford University, said that the study illustrates how climate change could create conditions that already-endangered ecosystems cannot withstand.

"As periods of drought begin to be seen more frequently in tropical forests — the lungs of our planet — the risk that these ecosystems will burn increases," said Coulson, who is familiar with the study but had no role in it.

"Because the species found there are not well-adapted to cope with fire, the consequences could be devastating," he said. "[This] work highlights that the changes we are making to our climate can put ecosystems at risk to factors, such as fire, that they are poorly equipped to deal with." 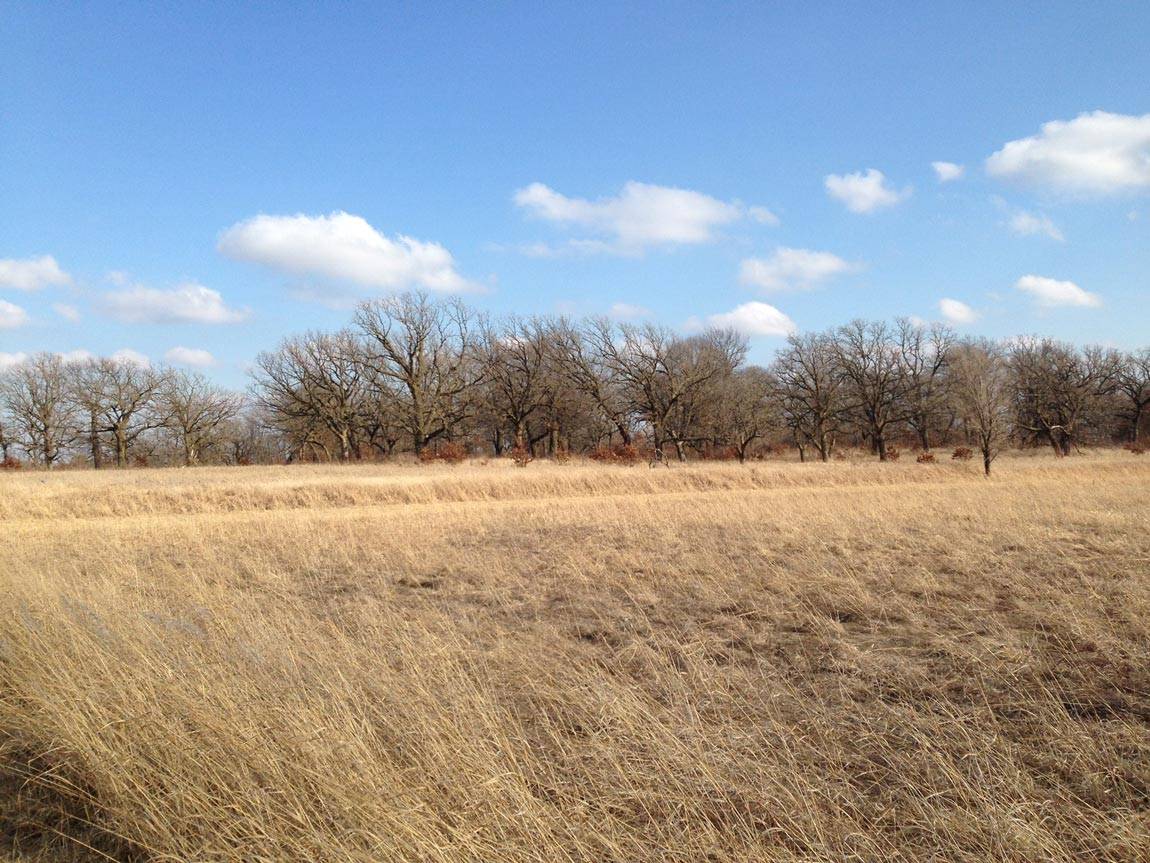 In North America, some of the thickest barked species are oak species, which can dominate drier savannas (above) that burn frequently every two to five years. Outside of oak savannas, forests also can contain species with thick bark such as ponderosa pine, which generally occurs in areas that burn every five to 10 years. (Photo by Adam Pellegrini, Stanford University)

Pellegrini, who received his Ph.D. from Princeton in 2016, worked with, from Princeton, Stephen Pacala, the Frederick D. Petrie Professor in Ecology and Evolutionary Biology and a member of the Princeton Environmental Institute; former postdoctoral research fellow William Anderegg, who is now an assistant professor at the University of Utah; Tyler Kartzinel, a former postdoctoral research fellow and NatureNet Science Fellow who is now an assistant professor at Brown University; and former graduate student Sam Rabin, who earned his Ph.D. in 2016 and is now a postdoctoral scientist at the Karlsruhe Institute of Technology in Germany.

Co-authors C.E. Timothy Paine at the University of Stirling, Douglas Sheil of the Norwegian University of Life Sciences, Augusto Franco of the Universidade de Brasília and William Hoffmann of North Carolina State University provided the data on bark thickness used for the study.

The paper, "Convergence of bark investment according to fire and climate structures ecosystem vulnerability to future change," was published Jan. 9 by Ecology Letters. The study was funded by the National Science Foundation and the National Oceanic and Atmospheric Association.