by Kristin Qian, Class of 2018, for the Office of the Dean for Research

Massive tree die-offs due to drought have ravaged forests across the American West and left ecologists struggling to predict how and when tree deaths will happen, and how rising temperatures due to climate change might affect the health of forests.

In a new study, a team including Princeton University researchers has identified the traits that best protect trees against death from drought. Published online this week in the Proceedings of the National Academy of Sciences, the study found that the species most resistant to drought are those that are better at withstanding stress to the water transport system — composed of internal pipes known as xylem — that carries water from the roots to the crown.

Better understanding the susceptibility of trees to drought could help forestry experts create early-warning systems and take precautionary steps, such as planting more resilient species or thinning overcrowded forests to reduce a forest's vulnerability to drought, the researchers report.

"We don't really know the future of forests in a changing climate," said lead author William Anderegg, an associate research scholar in the Princeton Environmental Institute and an incoming assistant professor of biology at the University of Utah. "Our results provide a foundation for improving our predictions of drought-induced tree mortality across Earth's diverse forests." 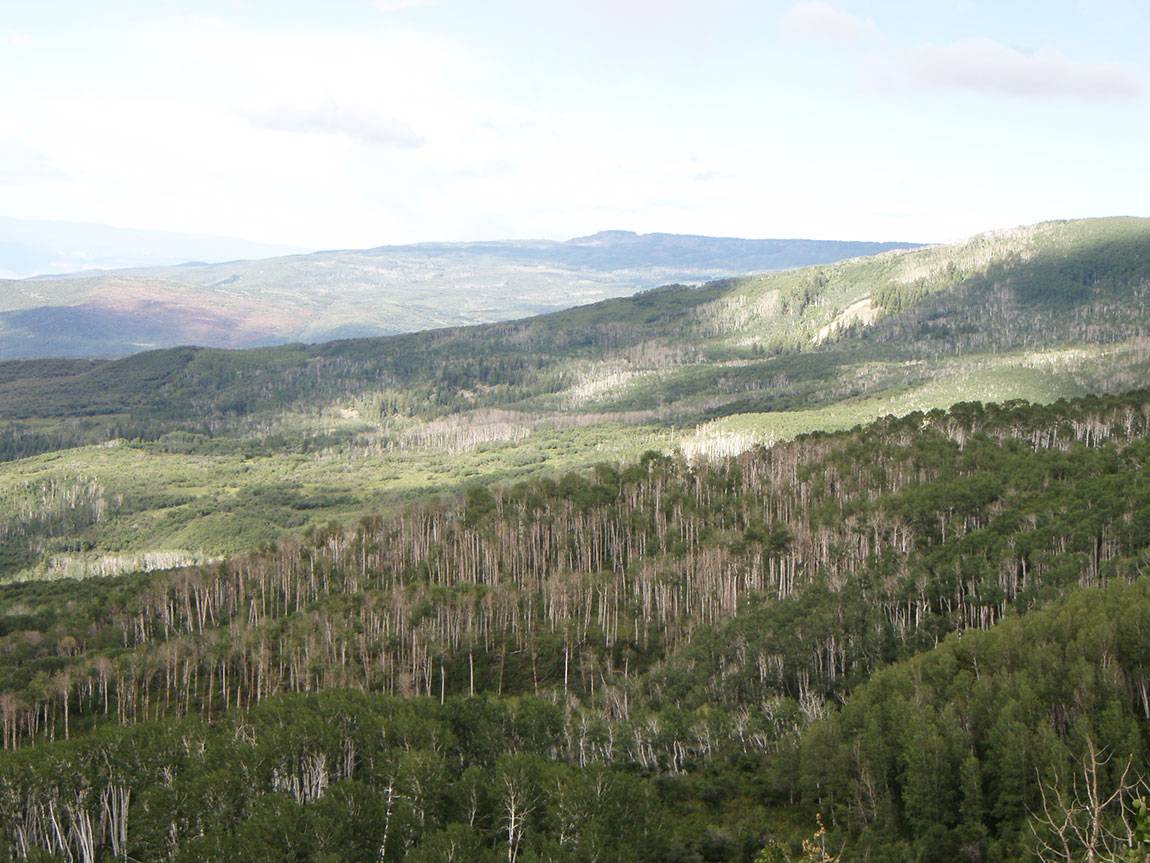 A team including Princeton University researchers has found that tree species that can withstand stress to the water-transport system that carries water from the roots to the crown are less susceptible to drought and massive die-off. The findings could help forestry experts, especially in the American West, create early-warning systems and take precautionary steps to reduce a forest's vulnerability to drought. In the photo above, severe drought killed trembling aspens (Populus tremuloides) near Grand Junction, Colorado, in August 2010. (Photo by William Anderegg, Princeton Environmental Institute)

Trees normally pull water from the soil into their roots then up through their trunks to the leaves. Water inches up the xylem to replace water evaporating from the leaf surface. This pulling of water creates tension that Anderegg compared to a spring getting tauter and tauter as drought progresses.

When water is scarce, the trees have to pull much harder on the water in the xylem, which allows air bubbles to infiltrate the pipes. The bubbles cause blockages, or embolisms, that clog the pipes the way a blood clot blocks flow through an artery. The result, Anderegg said, is "like a heart attack for a tree."

The study found that the ability to withstand this stress was more predictive of survival than other factors such as the overall amount of water lost through leaves and the depth of roots. Tree species with a larger "hydraulic safety margin" — measured by how well the trees can tolerate the tension from pulling water through the xylem — are better able to survive drought, said Anderegg.

The team found that angiosperms (flowering trees) and gymnosperms (cone trees) were equally likely to die in drought. Among angiosperm species, wood density emerged as a useful predictive trait of drought survival, perhaps because trees with dense wood tend to have more armor around their xylem. 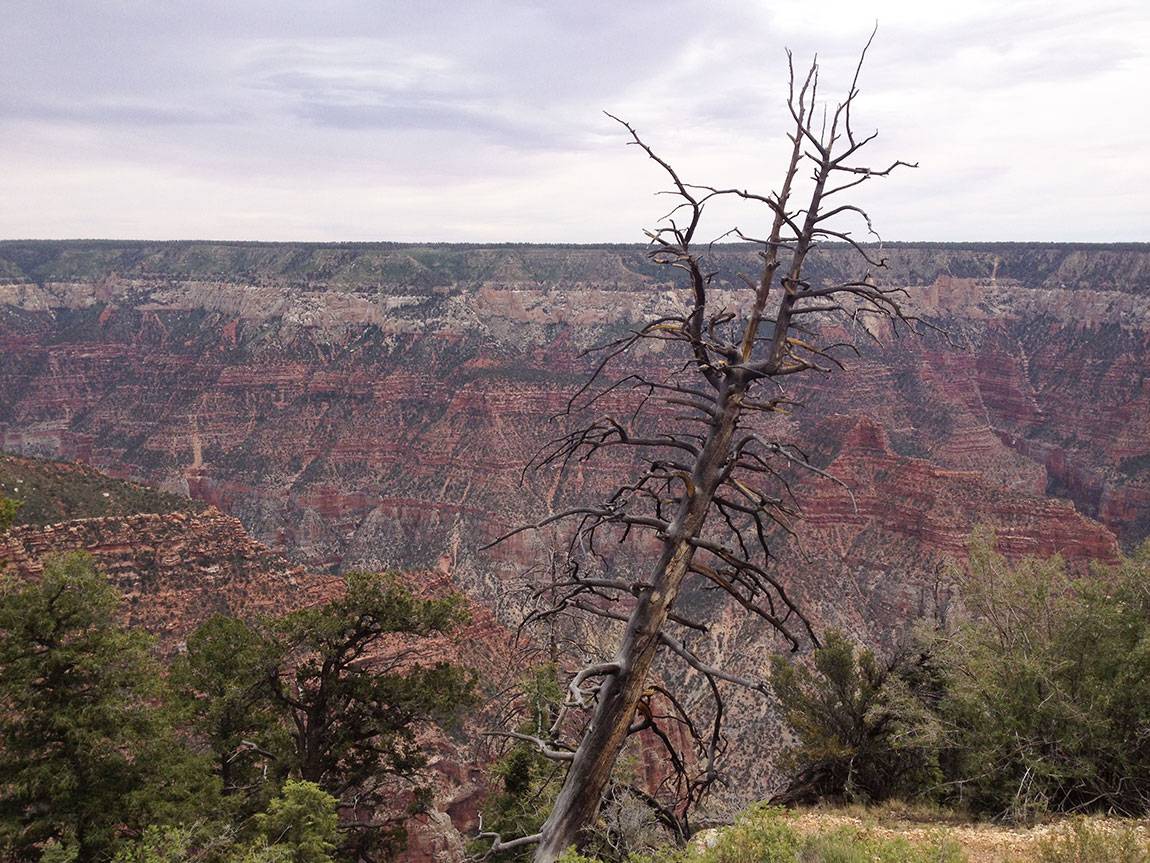 A dead ponderosa pine (Pinus ponderosa) stands near the Grand Canyon in Arizona June 2014. The western United States has been a hotspot for die-offs in recent years, with forests facing danger in Colorado, Arizona, New Mexico, Utah, Texas and California. Although rising CO2 levels in the atmosphere can benefit tree growth, the rising temperatures associated with climate change can trigger droughts that kill trees, which dampens CO2 removal from the atmosphere. (Photo by William Anderegg, Princeton Environmental Institute)

Data for the study was obtained from dozens of published peer-reviewed scientific studies and the Xylem Functional Traits Database, which contains measurements of the hydraulic safety margins for each species as determined through laboratory experiments.

Anderegg designed the study in collaboration with Tamir Klein of the Agricultural Research Organization, Volcani Center, in Israel. Data and analytical tools were provided by Adam Pellegrini, a Princeton graduate student of ecology and evolutionary biology; Lawren Sack and Megan Bartlett, a professor and graduate student, respectively, of ecology and evolutionary biology at the University of California-Los Angeles; Brendan Choat, a senior lecturer at the Hawkesbury Institute for the Environment at Western Sydney University in Australia and Steven Jansen, professor of botany at Ulm University in Germany.

The team collected information on drought-induced tree deaths from 33 individual studies performed around the globe, which included data on 475 species and over 760,000 individual trees. They examined various forest environments, including tropical rainforests, temperate deciduous forests, evergreen forests and savanna woodlands. In all, the team investigated 10 physiological traits they deemed important for predicting mortality.

The study may help predict how drought-induced tree mortality fits into models of future climate change, Anderegg said. Although rising CO2 levels in the atmosphere can benefit tree growth, the associated rising temperatures can trigger droughts that kill trees, which in turn dampens CO2 removal from the atmosphere.

The western United States has been a hotspot for die-offs in recent years, with forests facing danger in Colorado, Arizona, New Mexico, Utah, Texas and California. According to Anderegg, recent estimates indicate that between 20 million to 60 million trees are dying from the current drought in California. 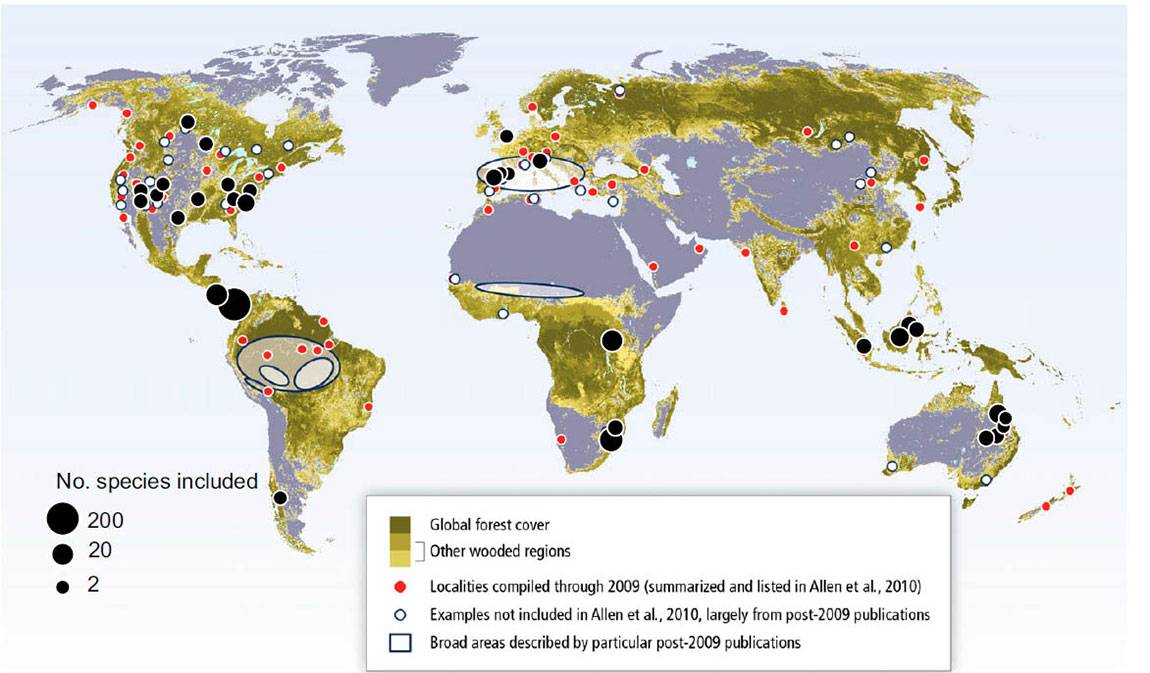 The researchers collected information on drought-induced tree deaths from 33 individual studies performed around the globe, which included data on 475 species and over 760,000 individual trees in a variety of forest types. The green and yellow areas above represent global forest and woodland cover. Black dots indicate the mortality rates of all trees in the examined area, with the size proportional to the number of species reported. Red dots indicate pre-2009 mortality studies, while white dots indicate post-2009 studies. The blue-outlined ovals are broad regions described by post-2009 studies. (Figure by William Anderegg, Princeton Environmental Institute)

Park Williams, an assistant research professor at Columbia University's Lamont-Doherty Earth Observatory, said that the research reveals how it is that trees to a species succumb to drought, and how scientists can analyze that process to assess drought vulnerability.

"We all know that the chances of a plant dying goes up when water becomes limited, but we're unsure what the exact processes are inside the plant that cause death during drought and we're even more unsure how to model those processes," said Williams, who was not involved in the work. "This new meta-analysis sheds important light on this issue by telling us that trees are more-or-less all sensitive to the same thing during drought — hydraulic failure.

"When a tree is forced to work too hard to pull water out of soil its 'straws' collapse similarly to how a straw collapses if we work too hard to drink a milkshake," Williams continued. "This paper agrees with other recently published research that indicates that if we can accurately model how hard trees are having to work to pull water from soil, this would improve our ability to model how likely they are to die during a drought."

Todd Dawson, professor of integrative biology at the University of California-Berkeley, said the research provides a holistic understanding of tree die-off at a time when global temperatures — and possibly drought conditions — are expected to rise.

"The paper adds a long-overdue global analysis to the ongoing discussion about the root causes leading to tree mortality across a wide range of trees," said Dawson, who is familiar with the research but was not involved in it. "Unfortunately, as the climate warms and extreme droughts and heatwaves increase, I fear that we will be adding more examples and numbers to the database Bill Anderegg and his co-authors report in their important paper."

"We'd like to have a crystal ball to see the future of forests," Anderegg said. "Right now we've got a very fuzzy and cracked ball that we're slowly trying to polish and get a better view."

The paper, "Meta-analysis reveals that hydraulic traits explain cross-species patterns of drought-induced tree mortality across the globe," was published online in-advance-of-print the week of April 18 by the Proceedings of the National Academy of Sciences. The research was funded by the National Science Foundation; the National Oceanic and Atmospheric Administration (NOAA); the Swiss National Fund Project; the European Union; the Australian Research Council; and the German Science Foundation.