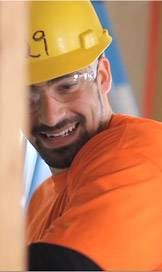 Princeton student-athletes, coaches and administrators representing a cross-section of the campus athletics community have participated in "Weapons of Mass Construction," a service initiative established by the Princeton Varsity Club and Isles Inc. As part of a renovation of the Mill One site in Hamilton, Princeton senior Octavio Fleury, a member of the football team, works on the interior of the building, helping with demolition and clearing walls that needed to be removed.

Since spring 2009, the Princeton Varsity Club has partnered with Isles Inc., a Trenton-based community development organization, to involve Princeton student-athletes and other campus community members in "Weapons of Mass Construction," an effort to help revitalize poor urban areas located just miles from the University.

This video features the participants and activities of "Weapons of Mass Construction." To date, more than 375 student-athletes, coaches, athletic administrators and academic-athletic fellows have dedicated more than 1,400 service hours to the program from a wide cross-section of Princeton teams.

Isles was founded by Princeton students and faculty under the leadership of Martin Johnson, a 1981 Princeton graduate and varsity football letter-winner. Johnson, who is CEO of Isles, noted that the organization's mission "is to foster self-reliant families in healthy, sustainable communities."

With that goal in mind, the Princeton Varsity Club has participated in "Weapons of Mass Construction" projects at Mill One, a six-and-a-half acre site in Hamilton that is being converted by Isles into a mixed-used, green village that will ultimately house offices for public interest and environmental organizations, a training center for inner-city youth, as well as homes and artist studios. The Princeton contingent also has worked to create a 10,000-square-foot garden that was formed to not only grow fresh vegetables, but to teach young men and women about the importance of farming. The site for the garden is located outside the doors of the Isles YouthBuild Institute in downtown Trenton and has been used as teaching tool for the YouthGrow teen gardening program that focuses on urban agriculture.

Peter Farrell, the head coach of the Princeton women's cross-country and track and field teams, has participated in Weapons of Mass Construction each year since its inception, working side-by-side with his student-athletes. He spoke of the enduring experience the initiative has on the participants.

"You're planting a seed for future involvement on behalf of student-athletes," Farrell said. "The continuity is extremely important. Marty's been doing this for 30 years down here [in Trenton], a Princeton student whose project became a realization and [who] is here, helping the community. You don’t know which one of these kids will become another Marty Johnson."

To read more about the program, visit the Princeton Varsity Club website.

Student-athletes, coaches and staff gather for a group photo in front of Mill One, which is being converted by Isles into a mixed-used, green village that will ultimately house offices for public interest and environmental organizations, a training center for inner-city youth, as well as homes and artist studios. (Photo courtesy of Jeff Taylor)

Student-athletes use 'weapons of mass construction' to help nonprofit