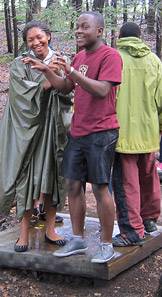 Kabila Gana from Cameroon and Hamed Zackaria Kone from Côte d'Ivoire participate in an outdoor experiential challenge as part of the African Leadership Academy's inaugural "indaba," or gathering. A video documents participants' reactions to the events held at Princeton-Blairstown Center and the University’s main campus.

Nearly 45 future leaders from countries across the African continent were reunited at a five-day retreat and conference in August held in part on the Princeton University campus. They are all alumni of the African Leadership Academy (ALA), a two-year boarding high school in Johannesburg, South Africa, which chose Princeton for its inaugural "indaba."

An indaba, which means "gathering" in Zulu, is often called by Southern African tribal leaders when there is important news to share.

A video documenting the indaba shows the participants' reactions to the outdoor experiential education activities and workshops at Princeton-Blairstown Center, a camp in northwestern New Jersey that is affiliated with the University. The video also covers the last day and a half, which featured a professional conference and receptions on the University's main campus.

ALA aims to transform Africa into a peaceful and prosperous continent by developing and supporting its future leaders. The week's events focused on creating a lifelong network of support among the ALA alumni and connecting them with conference participants who might be able to help them realize their goals.

Most of the ALA alumni who attended the Princeton event are now freshmen and sophomores at colleges and universities in the United States, including Kiiru "Sam" Gichohi, a member of Princeton's Class of 2014.

During the event on campus, Princeton President Shirley M. Tilghman said of the academy's work, "It is so inspiring to see the students who are setting as one of their goals, to become the generation of leaders who are going to really make Africa a place that is prosperous and healthy and forward thinking for all of its people. It is a mission that we resonate with very much here at Princeton."

The University's connections to ALA go beyond the indaba. Three Princeton alumni are ALA trustees, and Steve Boehlke, a 1970 Princeton graduate, helped to develop the school's leadership curriculum and continues to advise the school. Also, three Princeton in Africa fellows have interned at ALA since classes began in 2008.