Under the terms of a memorandum of understanding with Princeton Borough and Princeton Township, Princeton University will operate the waiting room in the Dinky commuter rail station from 6 a.m. to 11 a.m. on weekdays, beginning Nov. 1. Here, Township Mayor Chad Goerner enters the station for a reception marking the beginning of University operations.

Passengers waiting to ride the Dinky at the Princeton commuter rail station now have access to a climate-controlled space before they board the train on weekday mornings.

Under the terms of a memorandum of understanding approved by Princeton Borough on Oct. 4 and by Princeton Township on Oct. 24, Princeton University will operate the Dinky station waiting room from 6 a.m. to 11 a.m., five days a week.

Community leaders came together at the Dinky station Tuesday, Nov. 1, to mark the beginning of University operations. Borough Mayor Mildred Trotman and Princeton Township Mayor Chad Goerner joined New Jersey Transit Regional Manager of Government and Community Relations Thomas Clark and Princeton University Vice President and Secretary Robert Durkee at a reception in the refurbished waiting room at the end of the first morning of operations.

"I think anyone who has lived in Princeton over these last decades knows that there has been a lot of interest in having this building open more than it had been," Durkee said. He added that the station arose several months ago as a topic of discussions with the borough and township over transit needs. "One of the first questions that came up was, did we think we could persuade New Jersey Transit to allow the University to open and operate this building as a waiting room for at least some of each weekday."

Under a 1984 agreement under which Princeton University purchased the station buildings from New Jersey Transit, the state rail authority was responsible for operating the north and south station buildings, while the University assumed responsibility for their maintenance and upkeep. Under the new agreement, New Jersey Transit agreed that the University could take responsibility for operating the north station waiting room for five hours each weekday, Monday through Friday.

Patrons will be able to use the restrooms and the waiting area during the five-hour timeframe, with the University opening and maintaining the facilities, while New Jersey Transit retains responsibility for any operations outside of 6 a.m. to 11 a.m. 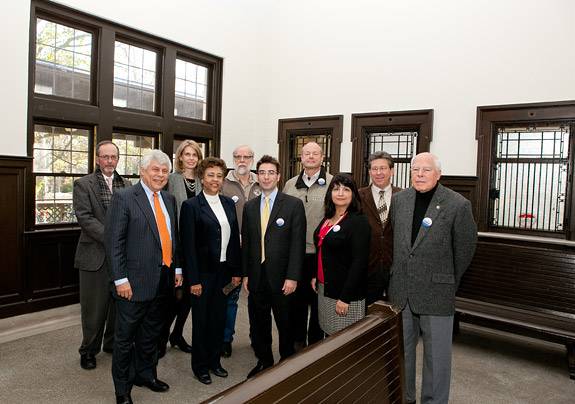 "New Jersey Transit is always happy to work with the communities in which our stations are located," Clark said, "and in this case it was really a pleasure working with the University, Princeton Borough and Township in order to make what was important to the community a reality."

Goerner said it was a welcome sight to see the station open to aid commuters.

"Mass transit is an important component of our community, and I think that anything we can do that is within our power to enhance ridership under these circumstances is a good thing," he said.

Trotman added that the station will be particularly beneficial during inclement weather. "I care about the users and that they no longer have to stand out in the inclement weather, whether it's hot or cold," she said. "That some of the amenities will be here for them to use is also a concern to me. It has to be a much more pleasant wait inside vs. outside, and this gives you an option, so I am very excited about it being available for the users."