Contrary to the ideal of a completely engaged electorate, individuals who have the least interest in a specific outcome can actually be vital to achieving a democratic consensus. These individuals dilute the influence of powerful minority factions who would otherwise dominate everyone else, according to new research published in the journal Science.

A Princeton University-based research team reports Dec. 16 that this finding — based on group decision-making experiments on fish, as well as mathematical models and computer simulations — can ultimately provide insights into humans' political behavior.

The researchers report that in animal groups, uninformed individuals — as in those with no prior knowledge or strong feelings on a situation's outcome — tend to side with and embolden the numerical majority. Relating the results to human political activity, the study challenges the common notion that an outspoken minority can manipulate uncommitted voters. 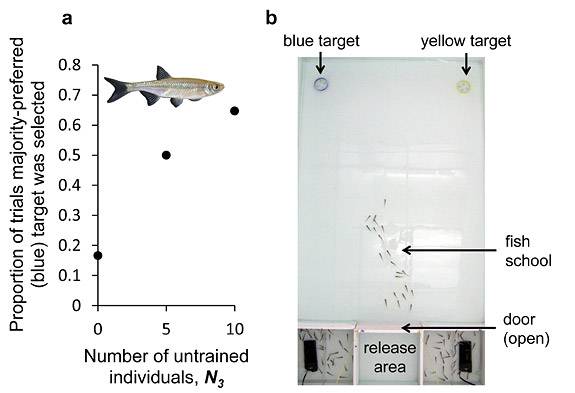 Princeton University-led researchers found that uninformed individuals — those with no strong opinion or prior knowledge — promote democratic consensus by diluting the power of a strongly opinionated minority that would otherwise dominate group decisions. Because uninformed individuals have no feelings on a situation's outcome, they side with and embolden the numerical majority. The researchers saw this dynamic play out with golden shiners, a strongly schooling fish. The researchers trained a large number of groups to swim toward a blue target, while smaller groups were trained to follow their natural predilection for a yellow target (right image). When placed together, the large trained group would follow the smaller group to the yellow target. When fish with no prior training (the uninformed individuals) were introduced, however, the fish increasingly swam toward the majority-preferred blue target (left image). (Image by Science/AAAS)

"The classic view is that uninformed or uncommitted individuals may allow extreme views to proliferate. We found that might not be the case," said lead author Iain Couzin, a Princeton assistant professor of ecology and evolutionary biology. He and his co-authors found that even a small population of indifferent individuals act as a counterbalance to the minority — whose passion even can cause informed individuals in the majority to waver — and restore majority rule.

"We show that when the uninformed participate, the group can come to a majority decision even in the face of a powerful minority," Couzin said. "They prevent deadlock and fragmentation because the strength of an opinion no longer matters — it comes down to numbers. You can imagine this being a good or bad thing. Either way, a certain number of uninformed individuals keep that minority from dictating or complicating the behavior of the group."

Of course this effect has its limits, Couzin said. He and his co-authors also found that if the number of uninformed becomes too high, a group ceases to function coherently, with neither the majority nor the minority taking the lead. "Eventually, noise dominates because there just aren't enough informed individuals to guide the group," he said.

An important aspect of the findings, said Couzin, is that they are based on experiments on groups of fish, as well as mathematical models and computer simulations. Though the idea of uninformed populations benefiting the democratic process seems counterintuitive, the experimental results suggest that this dynamic is a naturally occurring decision-making process, he said.

The experiments involved golden shiners, a fish prone to associating the color yellow with a food reward, Couzin said. The researchers trained groups of golden shiners to swim toward a blue target, while smaller groups were trained to follow their natural predilection for a yellow target. When the two groups were placed together, the minority's stronger desire for the yellow target dominated the group's behavior. As fish with no prior training (the uninformed individuals) were introduced, however, the fish increasingly swam toward the majority-preferred blue target, the researchers report. 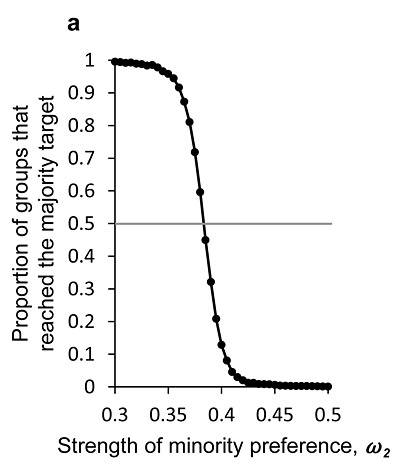 "We think of being informed as good and being uninformed as bad, but that's a human construct. Animal groups are rarely in a fractious state and we see consensus a lot," said Couzin, who studies the behavior and communication behind animal movement, swarming and flocking.

"These experiments indicate there is an evolutionary function to being uninformed that perhaps is as active as being informed," he said. "Animals may be equally adaptable to simply going with the majority in certain circumstances because having that quick decision-making capability is beneficial for survival. We shouldn't think of it as a bad thing, but look at advantages animals exhibit to being uninformed in natural circumstances."

Donald Saari, a professor of mathematics and economics at the University of California-Irvine who studies voting systems, said he sees parallels to the Princeton-led work in markets and politics.

Highly informed economic forecasters and political activists frequently lose out to the masses of consumers and regular voters who base decisions on personal preferences and reasons more than on expertise, said Saari, who is familiar with the Science report but had no role in it.

For instance, he said, the arc from minority domination to pluralism to the potential degeneration into "noise," as described in the Princeton study, can be seen in the American electoral system.

A forceful minority can dominate in circumstances that attract the more politically inclined, such as midterm elections and primaries. In more popular elections, however, that influence wanes as less passionate people participate. Situations in which a candidate's personality or personal life takes precedent over policy positions in voters' minds could be an equivalent to the breakdown in direction Couzin and his co-authors found when there is a glut of uninformed individuals, Saari said.

"This study gives us a new interpretation of group decision making that really flies in the face of previous opinions. We usually assume that a highly opinionated and forceful group is going to sway everyone," Saari said.

"What we have we here is something very different," he said. "It doesn't say whether or not the consensus it good, it just provides a way of understanding when and how the consensus changes. If the numbers of the uninformed, or people who don't have a strong opinion, are large enough, that dilutes the effect of the highly opinionated or knowledgeable in the final outcome. Quite frankly, I think it's because the highly opinionated are not in the center and the uninformed, to a large extent, are."

Saari said that there might be an additional consideration or factor that uninformed individuals bring to the group process rather than mere devotion to the majority opinion.

"These results raise a lot of questions for me and present another way of thinking about and coming up with explanations for what we observe in group dynamics," he said.

"I think the effect the uninformed have is much more than just number-counting plurality and that they're offering something else," Saari said. "Why are the fish with no 'opinion' more effective toward taking the group toward plurality than the fish that only had some opinion? What is that additional dynamic, what are the real contributions of the uninformed? I don't know what it is, but I do know it's worth investigating."

The power of the uninformed in simulations and reality

The researchers developed three models that initially revealed and described how uninformed individuals restore popular power. The modeling work was based on a computational tool developed in Couzin's lab that predicts and explains animal group behavior based on various forms of social interaction among group members. Couzin first reported the model in the journal Nature in 2005.

For the current work in Science, Couzin worked with, from Princeton, second author Christos Ioannou, a former postdoctoral fellow in Couzin's lab who is now a research fellow at the University of Bristol; postdoctoral researcher Colin Torney and doctoral student Andrew Hartnett, both in Couzin's lab; and professors Simon Levin, the Moffett Professor of Biology and co-author of the 2005 Nature paper, and Naomi Leonard, the Edwin S. Wilsey Professor of Mechanical and Aerospace Engineering. The team also included Güven Demirel, a researcher at the Max Planck Institute for the Physics of Complex Systems; Thilo Gross, an engineering lecturer at the University of Bristol; and Larissa Conradt, a visiting researcher at the University of Cambridge. 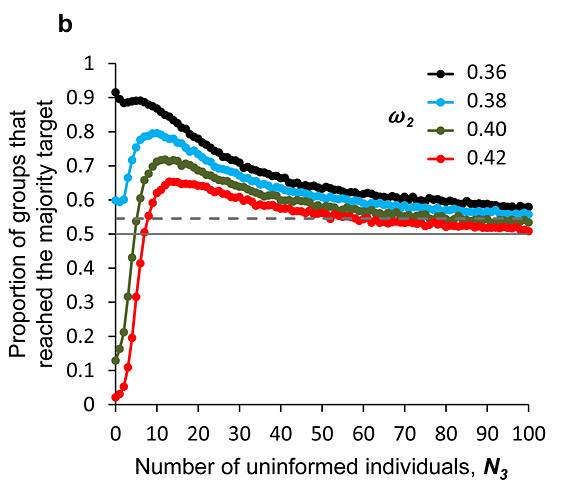 The models showed that even the presence of one or two uninformed individuals caused an immediate change in the group's behavior, even in groups with the most adamant minority. This figure shows the effect of the uninformed on the four animal groups by strength of the minority opinion, with black being the least intense and red indicating the most. In the red group, the majority nonetheless took back control with less than 10 uninformed individuals present. Around 20 uninformed individuals, however, all four groups begin to experience "noise," which the researchers describe as a state where too many uninformed individuals result in a lack of leadership. (Image by Science/AAAS)

In this project, Couzin used his model to first simulate animal groups of different sizes with a majority and a minority population, each with a differing preference to move in a certain direction. He added the factor of how strongly the respective groups felt about their preference, a variable he could increase or decrease.

Mathematical models — one created by Demirel and Gross, another by Torney — helped explain the mysterious pull of the uninformed individuals. These models were based on social processes in human groups, such as how conventions become established, or how people influence each other's opinions, Couzin said.

The calculations indicated that during the decision-making process, all individuals have a tendency to follow what they perceive as the predominant view, but opinionated individuals are more resistant to social pressure, Couzin explained. This reluctance to compromise manipulates the perception of what is popular, meaning that the strong convictions of the minority can make their view seem dominant. Uninformed individuals, having no strong opinion or preference, tend to inhibit this process because they respond quickly to numerical rather than semantic differences and curb the influence of forceful individuals. 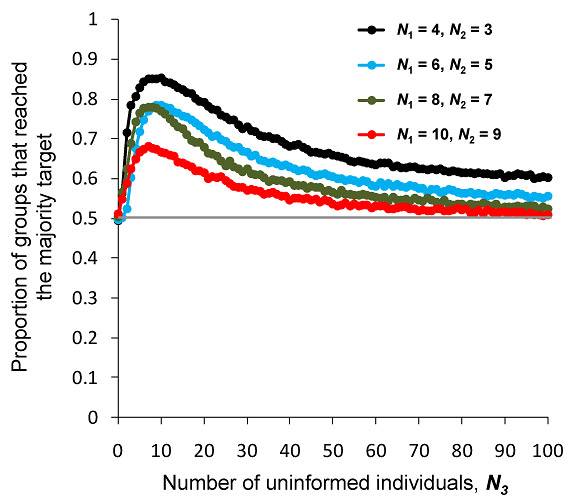 The researchers modeled different sizes of animals groups, always with the majority (N1) having one more individual than the minority (N2). Uninformed individuals had the strongest and more immediate influence in smaller groups. Again, disorder sets in when the number of uninformed individuals gets too high. (Image by Science/AAAS)

The models were used to design the experiments with the golden shiners, which Ioannou, who was not aware of the hypothesis being tested, conducted over a three-month period. The majority group of fish trained to swim toward the blue target consisted of six fish; five fish made up the strongly "opinionated" minority group, which was driven by a natural attraction to the color yellow.

As in the simulations, the minority group won out when uninformed individuals were not present and the fish swam toward the yellow target in slightly more than 80 percent of the trials where only the minority and majority groups were present.

"We saw that the counterweight to a powerful minority can come from the least expected population — the uninformed," Couzin said.

"It was extremely rewarding to see this counterintuitive prediction play out in reality with living organisms," he said. "Our work is a simplification of reality, but it allows the underlying mechanics of this type of decision making to be observed and understood."

The research was supported by grants from the National Science Foundation, the Searle Scholars Program, the U.S. Navy Office of Naval Research, the Royal Society and the Defense Advanced Research Projects Agency administered by the U.S. Department of Defense.