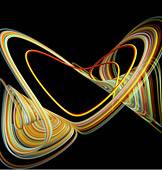 The "Art of Science" exhibition features aesthetically pleasing images produced during the course of scientific research. First place was awarded to "Chaos and Geomagnetic Reversals" by Christophe Gissinger, a postdoctoral researcher in astrophysical sciences and the Princeton Plasma Physics Laboratory. The image shows a simple model of geomagnetic reversals, when the Earth's magnetic field flips, swapping the positions of the magnetic poles; the last time this happened was 780,000 years ago. Each ribbon of color represents a trajectory followed by the magnetic field during reversals; the two symmetrical, tightly wound clusters of ribbons illustrate the two magnetic poles. Although the trajectories exhibit some chaotic variations during each reversal, they always follow the same path in average, collectively forming a fractal structure known as a "strange attractor."

"Intelligent design" is the theme of the fifth "Art of Science" exhibition — featuring images made by Princeton University community members during the course of scientific research — now on view in the Friend Center and in an online gallery.

The 56 works featured in the exhibition were chosen from 168 submissions from 20 departments through a competition held this fall. Submissions came from undergraduates, graduate students, postdoctoral researchers, faculty, staff and alumni.

Play the "Art of Science 2011" video to view a selection of the 56 images on display. (Image by Xuening Bai and James M. Stone)

Jurors for the competition were Princeton President Shirley M. Tilghman; Dean of the Faculty David Dobkin, the Phillip Y. Goldman '86 Professor in Computer Science; and Joel Smith, the Peter C. Bunnell Curator of Photography in the Princeton University Art Museum.

"I have to admit it worried me plenty to learn that the theme of this year's 'Art of Science' competition was 'intelligent design,'" Smith said. "What phrase could sound further from science than that? But the year's entries convinced me of the point. Scientific imaging, today more than ever, is matter of design: making your results vivid, compelling, complex and yet persuasively transparent."

Cash prizes were given to the top three winners of the competitions: $250 for first place, $154.51 for second; and $95.49 for third. These amounts are derived according to the golden ratio, a mathematical proportion found in aesthetically pleasing designs, from seashells to ancient Greek temples.

The images will remain on view for a year in the Friend Center Atrium gallery, which is open weekdays from 9 a.m. to 5 p.m.

"Art of Science" 2011 was sponsored by the David A. Gardner '69 Fund in the Council of the Humanities, the Lewis Center for the Arts, PPPL, the School of Engineering and Applied Science, the Princeton Institute for Computational Science and Engineering, the Princeton University Art Museum, and the Office of the Dean for Research.